Long before he arrived in the United States to bring the ancient Indian practice of yoga to the West, Paramahansa Yogananda visited a temple in Kashmir and fell into an ecstatic trance: in his vision he saw the temple transform into a gleaming white mansion. It sat on a hilltop in a distant land.

Years later, he visited Mount Washington, a hilltop neighborhood less than six miles from downtown Los Angeles. And there he saw it, the gleaming white mansion.

“I recognized it at once from my long past visions in Kashmir and elsewhere,” he wrote.

The mansion was actually the long abandoned Mount Washington Hotel, and it would soon become the headquarters for the Self Realization Fellowship, the global organization Yogananda founded a century ago this year. The lasting power and reach of the group is a testament not only to the yogi’s cross-cultural charisma and uplifting message, but to the qualities that made Los Angeles his ideal spiritual home.

“Around the world, L.A. is known for being open-minded and a forerunner in all sorts of things — culturally, technologically and spiritually,” said Brother Chidananda, president and spiritual head of SRF, as it’s known. “He felt that L.A. was a place where he was most likely to find a receptive audience.”

Yogananda purchased the hotel in 1925 and immediately set about transforming its grounds into a lush and expansive oasis that includes a wishing well, an outdoor “temple of leaves,” a koi pond, trickling waterfalls and plenty of benches for meditation.

Today it houses a visitor center and gift shop and an administration building that includes his living quarters, left exactly as they were when he died in 1952. (Even the food he was served that day remains preserved under glass.)

About 200 monks and nuns live on or near the property, which SRF members call Mother Center. They care for the garden, participate in prayer circles, publish the guru’s copious writings, offer spiritual counseling and help run the SRF’s more than 600 temples and meditation centers around the globe.

“It is perhaps one of the few monastic orders that is growing, not shrinking,” said Lauren Landress, an SRF spokeswoman.

Yogananda spent 32 years in the United States, addressing tens of thousands in concert halls across the country, writing a bestselling autobiography that has sold more than 1 million copies, and instructing disciples that included George Eastman, founder of Kodak, and the pioneering botanist Luther Burbank. He counted Mahatma Gandhi among his friends, and President Calvin Coolidge invited him to the White House.

Yogananda’s influence can still be felt on popular culture — his face and the faces of his three gurus appear on the cover of the Beatles’ “Sgt. Pepper’s Lonely Hearts Club Band” album — and on contemporary thought; Apple founder Steve Jobs requested that everyone who attended his memorial service be given a copy of “Autobiography of a Yogi.”

If you stream yoga classes online, meditate to alleviate stress, or consider yourself more spiritual than religious, you have Paramahansa Yogananda, in part, to thank, said Diana Eck, professor of comparative religion at Harvard Divinity School.
“You can’t say it all began with him, but I think it began most popularly with him,” she said. “He was way, way ahead of his time.”

Like any other science, yoga is applicable by people of every clime and time.

Indian spiritual teachings were not entirely unfamiliar to Americans when Yogananda arrived in 1920. The Bhagavad Gita was translated into English in 1785, and John Adams and Thomas Jefferson exchanged letters about reading Hindu philosophy.

Indian sacred texts informed the Transcendentalist movement of the mid-1800s, and in 1893 Swami Vivekananda, a Hindu monk from Calcutta, became a media sensation after delivering a talk to the Parliament of the World’s Religions in Chicago. The following year he founded the Vedanta Society, the first teaching institution for Indian philosophy in the United States.

The society still exists, but Vivekananda spent only a few years in the West. Yogananda was the first Indian swami to make America his home.

“Here we had a teacher who came and basically dug his feet into the mud,” Eck said.

Yogananda was born Mukunda Lal Ghosh in 1893 into a large, well-off family in northern India. In “Autobiography of a Yogi,” he describes a youth informed by encounters with holy men and miracle workers who could levitate or be in two places at one time.

After graduating from the University of Calcutta in 1915, he took his vows as a monk, choosing the name Yogananda, which means “divine union with God through yoga.”

He founded a yoga school for boys in 1917, but three years later he had a vision that it was time to bring the spiritual wisdom of India to the West. The next day he was invited to represent India at the International Congress of Religious Liberals, to be held that year in Boston.

Days before he left for Boston, Yogananda wrote, he was visited by the mythical figure of Babaji, his guru’s guru’s guru, also known as “the deathless guru.”

“You are the one I have chosen,” Babaji said, “to spread the message of Kriya Yoga in the West.”

It was a radical undertaking, said Varun Soni, dean of Religious Life at USC.

“For hundreds of years we were on the receiving end of Christian missionaries as part of colonialism,” said Soni, who is Hindu. “For Yogananda to come as a Hindu missionary to the U.S., to bring the ancient wisdom of India in all of its purity and magnificence, this was a way of saying we also have something to offer.”

Self-realization is knowing one’s Self, one’s soul; and realizing that the soul is one with God.

Central to Yogananda’s teaching is the idea that one doesn’t have to renounce worldly life or live in a cave to have a direct encounter with God. He taught that blissful, divine communion is available to all, and that methods developed in India thousands of years ago represent the fastest path to establishing that connection.

The physical practice of yoga — known as the asanas — is just one branch of yoga, and it wasn’t what Yogananda particularly focused on. He was more interested in teaching techniques of intense concentration.
“What Yogananda brought is a fairly advanced and much more comprehensive meditation practice for people who feel they don’t want to be a dabbler anymore,” Brother Chidananda said.

Yogananda called his teachings “the science of religion” because he believed his methods were testable. Faith wasn’t part of the equation.

“It’s like chemistry,” Brother Chidananda said. “Regardless of whether you believe or not, if you follow the protocol with precision, you will get a predictable result.”

This emphasis on the scientific method, and his belief that people of all races, genders and religious backgrounds could encounter the divine, helped the swami connect with Americans.

“What he was speaking about was not otherworldly,” Eck said. “He said yoga was something that was demonstrable, if you practiced it you got certain results — and people did.”

Yoga requires no formal allegiance. Because the yogic science satisfies a universal need, it has a natural universal appeal.

Today Los Angeles is recognized as one of the most religiously diverse cities in the world, and that was true in the first half of the 20th century as well.

The Azusa Street Revival, a three-year ecstatic revival meeting, started here in 1906 and helped launch the Pentecostal movement. The flamboyant Aimee Semple McPherson arrived in Los Angeles in 1922 and quickly built a following in the tens of thousands, and in 1934 scholar and mystic Many P. Hall founded the Philosophical Research Society to promote the study of the world’s wisdom literature.

“I think what you’ll find connects the dots of all these new spiritual expressions — whether it’s Christian, Buddhist, Hindu, or spiritualist — is a creative reinterpretation of traditions,” Soni said. “That was the ethos of Los Angeles when Yogananda came.”

Yogananda’s followers chipped in to help him buy the Mount Washington property, which he called “the spiritual White House.” He held the first Easter sunrise service at the site even before the property was out of escrow. It’s a tradition that continues at many SRF temples today.

Yogananda revered Jesus, and he saw it as part of his mission to awaken the Western world to the true meaning of the gospels and how they aligned with Hindu philosophy.

Jesus-loving swamis were not as unusual as some might think, said Philip Goldberg, author of “The Life of Yogananda.” When missionaries brought the teachings of Jesus to India, many Hindus happily added his likeness to their altars. The problem, from the missionaries’ point of view: The Hindus didn’t take down the statues of other divinities.

“They consider him a great master, a great yogi, and a divine incarnation, but not the only one,” Goldberg said.

If you go to an SRF temple today, you’ll find Jesus’s image on the altar, along with that of Yogananda, his lineage of gurus, and the Hindu god Krishna.

“A lot of people are cynical about it, but I think he was really sincere about it,” Goldberg said. “You don’t write a 1,200-page, two-volume set on the teachings of Jesus if you don’t really believe it.”

A showcase for compelling storytelling from the Los Angeles Times.

Yogananda continued to travel across America, but to stay in touch with his growing number of students across the country, he created the Self Realization Fellowship Lessons, a kind of mail-order yoga and meditation school. Hard copies of the lessons are still sent through the mail from the Mount Washington headquarters.

But it wasn’t all smooth sailing: Lawsuits and rumored scandals were covered voraciously by newspapers at the time, although experts say accusations that Yogananda had inappropriate financial or sexual relations with his followers have not been corroborated.

The bad press may have been inspired by racism and jealousy.

“He was a brown-skinned Asian man, and he was confronting racial and religious prejudice,” Brother Chidananda said. “How do you think the orthodoxy reacted when he was speaking at the largest auditoriums? It was very threatening. Let’s be honest.”

The Western day is nearing when the inner science of self-control will be found as necessary as the outer conquest of Nature.

Yogananda arrived in the U.S. as the Spanish flu pandemic was finally receding. Now, in another time of fear and anxiety, interest in his teachings is at an all-time high.

With its temples and meditation centers shuttered, SRF officials say visits to the organization’s website have more than tripled during the pandemic compared with last year, while interest in online prayer requests has increased by a factor of six. Inquiries about guided meditation are up 77%.

In a YouTube video recorded at the beginning of the pandemic, Brother Chidananda reminded Yogananda’s modern-day followers of what their guru had taught them — to arrive on the battlefield of life as a fully equipped warrior.

The ability to silence the static noise of fear that threatens divine consciousness.

The unshakable knowledge that within every person lies a wise, loving, joyful, eternal soul.

That direct connection with God is always possible, for those who seek it.

It’s the message Yogananda brought from India a century ago, since relayed innumerable times from Mount Washington.

Who Might Joe Biden Select To Lead The Justice Department? : NPR 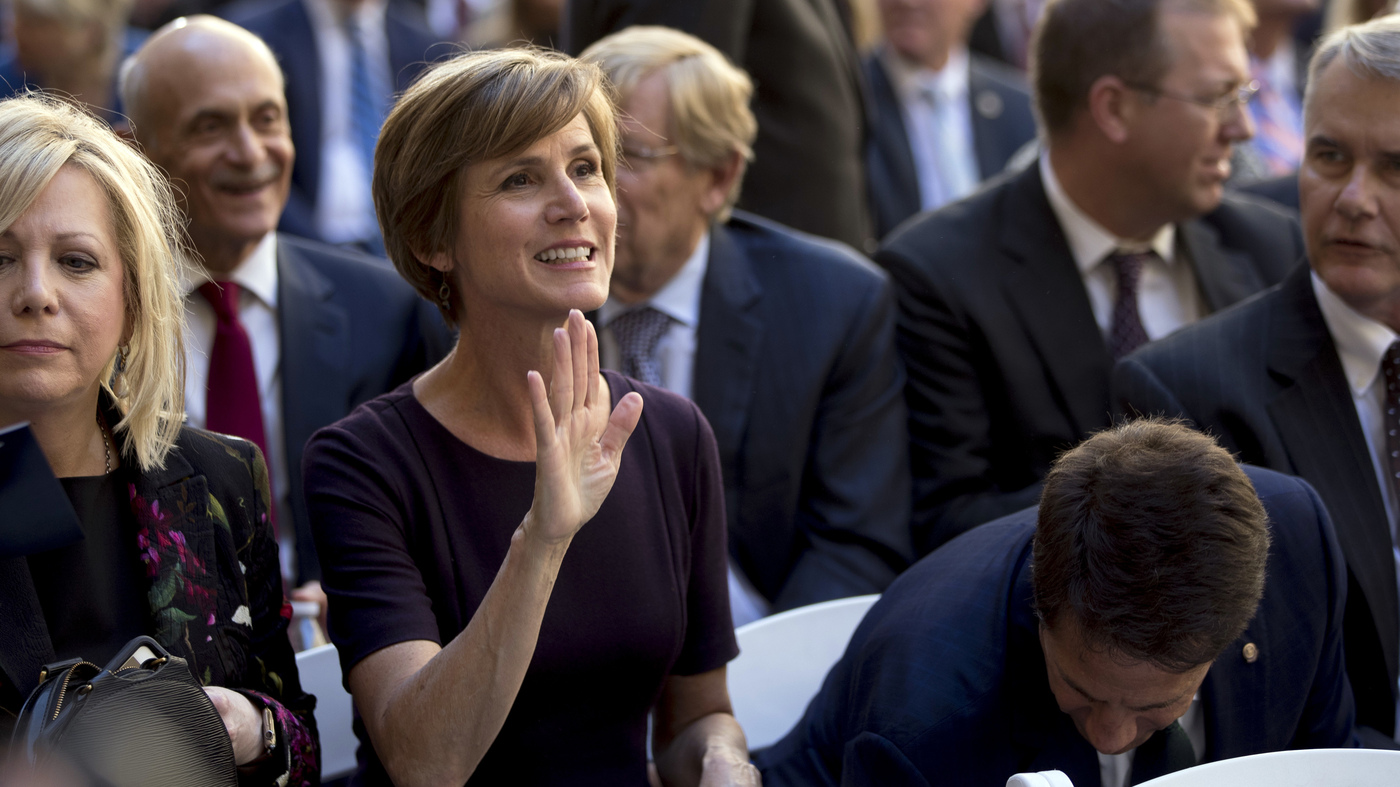