A SHARP GLANCE down to the gold Rolex wrapped around his left wrist lets him know it’s almost time.

In one Hollywood-like flourish, he scoops up his jacket, slips in the left arm, then the right; the finishing touch to his immaculate black Armani suit. After straightening his silver tie and adjusting his cuffs, he reaches down and lifts up a brown suitcase containing the morning’s files — a criminal conciliation hearing beginning at 10 a.m. sharp.

Moments later he spins around and heads toward the entrance of the Family Court of Australia, the click-clack of his polished dress shoes on the gray marble floor echoes around the foyer as he prepares to make his entrance.

Lovemore N’dou is no stranger to having a sea of eyes fixated on him every time he walks into work. A professional boxer for two decades, N’dou fought 64 times during his career, and at one point held the IBF World Light Welterweight title. Now, the South African-born Australian is fighting for justice as a south Sydney lawyer.

“They say lawyers are egomaniacs. But that’s fine,” N’dou tells ESPN as his upper lip begins to curl and resemble a cheeky smile. “It’s the same in boxing. You need to be confident and have that fighting spirit to win. You can’t step into the ring and ever be doubtful — that’s when you get knocked out. You can’t step into the courtroom and have doubts or you’ll lose your case.”

Facing injustice was a significant part of N’dou’s life long before he made the transition into law. Growing up in the small South Africa-Zimbabwe border town of Musina in the latter apartheid years, N’dou was subject to horrific racism and abuse.

By age 16 he had been imprisoned, beaten, witnessed cold-blooded murder and torture. One night while at home with his parents, two brothers and four sisters, the local police broke down the front door and dragged N’dou to the station, falsely accusing him of having sexual relations with a white woman, a felony for a black man in South Africa at the time.

“They broke my arm, chipped a tooth and then set a dog on me and it almost bit my eye off,” he painfully recalls. “I’ve actually got a scar over my right eye which people often think is from boxing, but that was from a dog. They almost killed me that night.

“As I lay in hospital, before wrongly going to jail for 90 days, one of the things I remember thinking was that someday I wanted to be a lawyer and fight for justice. You know, having to face and witness all of the atrocities committed against my community, it really got me thinking about studying law.”

The frustration of injustice soon spilled out into everyday life for N’dou who admits to being “a very angry” teenager who struggled to deal with poverty and despised the fact “black people were treated like savages in our own country.”

“There was one particular incident which happened where I knocked out this kid during a game and this security guard had to walk me out,” he says. “I remember he turned and said to me, ‘kid, soccer is not for you. Every time I see you you’re always getting into trouble. Why don’t you come and try boxing?’

“I figured I had nothing to lose, so I went the next day. It turned out this security guard was a boxing trainer and he started teaching me how to fight. I used to think as a boxer you needed to be angry to fight but I was wrong. You needed to be really calm. If you try and fix something when you’re angry, you just make more mistakes. Fighting is scientific, you know. It’s like playing chess. You’ve got to think straight and you can’t do that when you’re angry.

“Fighting made me calm and it really changed me as a person.”

In 1993, at age 21, N’dou made his professional fight debut against Enoch Khuzwayo in Johannesburg. He would prevail in dominant fashion and go on to fight 12 others in South Africa over the next 24 months. But with South Africa banned from international competition due to Apartheid, little opportunity and financial compensation was being offered to N’dou and other fighters in the country at the time.

Everything changed in 1995 when he travelled to Australia to fight undefeated local Cliff Sarmardin in Newcastle.

“It was love at first sight,” N’dou says, this time not even attempting to conceal his smile. “I really fell in love with the country right away and it was a lot to do with the reception I received. People treated me as an equal. They didn’t see a black man, they saw another human being, which was something that I was not accustomed to in South Africa. In my own country I am treated as a sub-species and here I am in Australia being treated as an equal.”

Within six months of that trip, N’dou had migrated to Australia and was able to springboard his boxing career, taking advantage of an opportunity which, while living in South Africa, seemed like a pipedream. A run of 17 unbeaten fights in the span of four years saw N’dou rise to become World Boxing Council’s No. 2-ranked fighter.

His defeat of Sarit Saeknaew at Melbourne’s Festival Hall in 2002 earned him the IBF Pan Pacific Light Welterweight title, his first major belt. He would defend this title three times before setting up a grudge match in Los Angeles against Britain’s Junior Witter.

Though he suffered a unanimous defeat, N’dou returned to Australia and rebounded by overcoming Naoufel Ben Rabah for the right to face the then-light welterweight world title holder, Ricky Hatton. When Hatton refused the bout, the IBF stripped him of his title and handed it to N’dou, becoming the second Australian in seven years to hold the belt after Kostya Tszyu.

Australian users can personalise their ESPN experience by downloading the app. Get live scores, news and videos for the teams and sports you love ANYWHERE, ANYTIME.

In the twilight years of his boxing career, N’dou fought Mexican superstar Canelo Alverez and Britain’s Kell Brook. He also worked as Floyd Mayweather’s main sparring partner. But even with all of the success, N’dou never forgot his roots and the pain and suffering he and his family sustained in Musina. He was determined to make a difference for the next generation.

It was in the summer of 2003 when N’dou — at the peak of his boxing career — walked into the University of Western Sydney as an undergraduate law student. It was time to branch out.

“I had always believed in education and that the power is in the pen,” N’dou says. “I was also looking at life after boxing, because you’re not going to box forever and you need something to fall back on. There are so many sad stories in boxing where boxers either finish with brain damage or no money or they end up committing crimes, mostly it’s because they’ve got nothing else to do.

“I remember when I first started, I had no idea how to use a computer. I had to submit all of my assignments online and I really didn’t know what to do, so I had to bribe my daughter. If she helped me I’d take her to the movies or buy her something!

“When I used to travel overseas [for a fight] I used to take these big law books with me. If I was overseas preparing for a fight I would train for hours and then go back to the hotel room and start studying. That became my life.”

Today, the 49-year-old has seven university degrees to his name and operates Lovemore Lawyers, a successful legal practice in the heart of Rockdale, Sydney. It’s a remarkable achievement for someone who was not offered the opportunity to attend school in South Africa until age nine.

He spends the majority of his working week standing up for those who aren’t in a position to do so for themselves, representing hundreds of clients in civil and criminal law. It’s a “fulfilling” profession, given the obstacles he was forced to overcome from such a young age, but it’s certainly not the end of the road for N’dou.

“I want to go back to South Africa and get into politics,” he says. “I’m really not happy with the current situation there. It’s been 26 years since South Africa became a democratic system but we still have people living in shacks and having to use the bucket sanitation system, we still have a shortage of running water, domestic violence and women and children are getting raped. It’s bad.

“I believe if it wasn’t for boxing, I would probably be dead now or locked up in jail over there. Someone needs to change how it is and I feel I could help bring those changes in South Africa. That’s the next chapter in my life.”

Lovemore N’dou’s book ‘Tough Love’ was released on November 23, 2020 and is available for purchase online and at bookstores.

Thu Nov 26 , 2020
Fox Business Flash top headlines are here. Check out what’s clicking on FoxBusiness.com. Everything’s going digital, even beer. Beer fans have very specific tastes, so when they find a drink they like, they stick with it. Due to the ongoing coronavirus pandemic, however, one popular, yet limited, brew won’t be […] 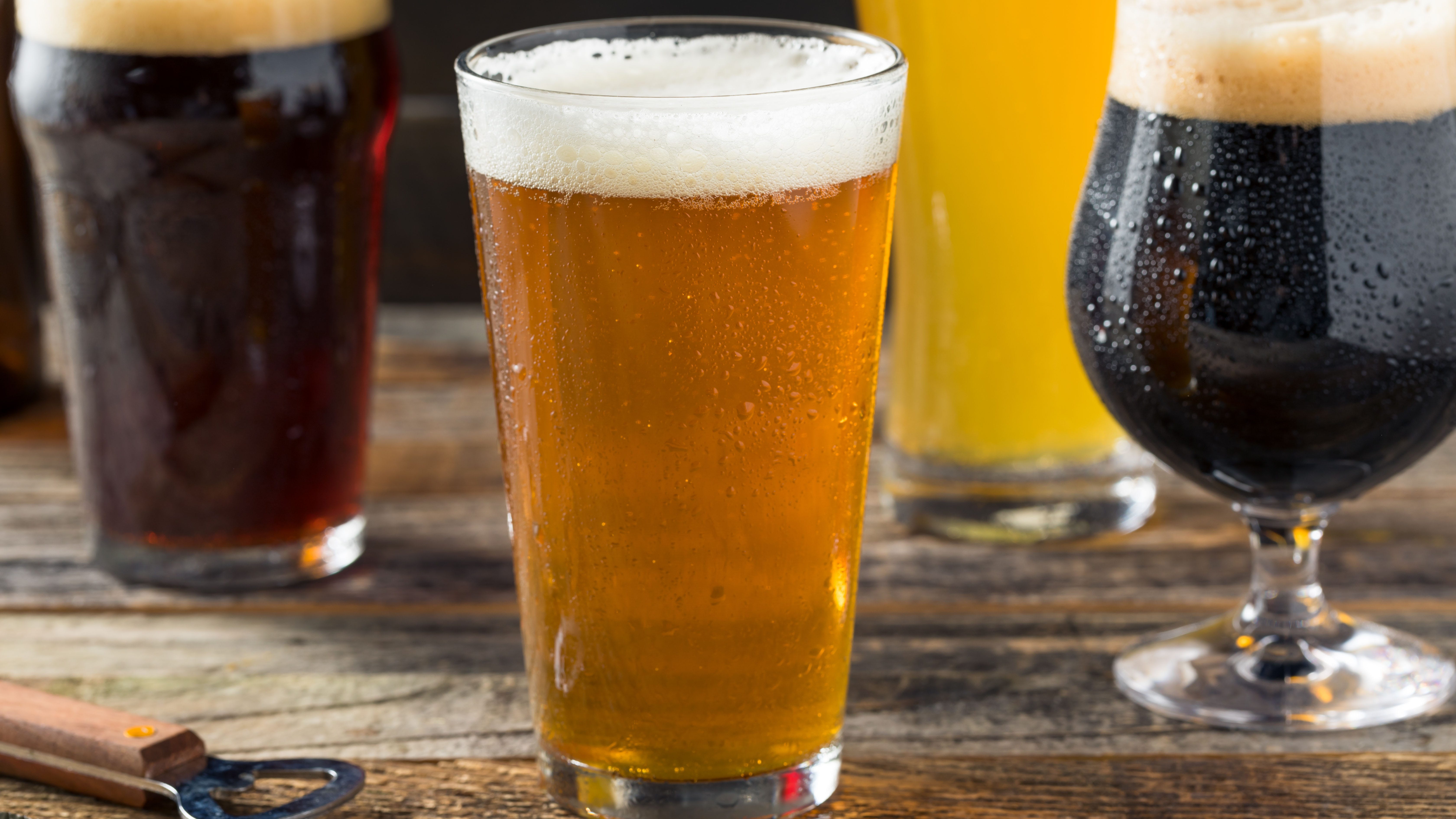