PHOENIX, Ariz. (Reuters) – Nadeen Bender stood outside her home, a tattered two-man tent, surrounded by the re-purposed Amazon Prime boxes she uses to store her life’s belongings. One by one, she checked the cartons to make sure nothing had been stolen in the night.

When asked about her Christmas plans, the rail-thin 43-year-old said through a face mask, “to try to avoid it.” Then she burst into tears.

The tent city that has served as Bender’s neighborhood for the past seven months is in the middle of downtown Phoenix, just down the road from luxury high-rise apartments and expensive restaurants.

To deal with an exploding homeless population and encourage social distancing during the pandemic, Marcipoa County officials turned this pair of asphalt-topped parking lots into the area’s newest homeless shelter. The county has more than 7,500 people on the streets, and nearly 5,000 dead from COVID-19.

Inside the crowded encampment, ringed by security fencing and barbed wire, each family has been allotted a 12-by-12-foot lot, marked by paint, to separate people as much as possible.

Phoenix is just one example of a slow-motion disaster unfolding in many large U.S. cities as homeless numbers, already growing in recent years, spike during the global pandemic.

The virus presents a compounding threat. Not only are these populations some of the most vulnerable to the coronavirus, but by destroying millions of jobs, the pandemic threatens a wave of evictions that experts warn could lead to a catastrophic housing displacement and even more people living on the streets.

With cities facing a steep hit to their tax bases due to lockdowns aimed at curbing the virus’s spread, homeless advocates say the federal government must step in, and estimate another $11.5 billion is needed immediately.

New funding for the homeless is not included in a $900-billion pandemic relief package passed by Congress on Monday. The fate of the bill was thrown up in the air the next day after outgoing President Donald Trump threatened not to sign it.

Meanwhile, the $4 billion provided earlier this year through the March CARES Act bailout and the U.S. Department of Housing and Urban Development is running out, advocates say.

“It’s not just the pandemic, it’s the financial fallout from the pandemic and the complete lack of a comprehensive response to the pandemic from the federal government,” said Diane Yentel, an advisor to President-elect Joe Biden and the president of the Washington-based National Low Income Housing Coalition.

Biden’s transition team did not respond to requests for comment. But fixing the affordable housing crisis was a pillar of his campaign platform, and included a pledge to spend $640 billion over 10 years to create affordable housing and “end” homelessness.

“Addressing homelessness remains the most pressing health equity challenge of our time. And it’s about to get worse,” said Dr. Howard K. Koh, a professor of the Harvard T.H. Chan School of Public Health who chairs its new initiative on health and homelessness.

As the coronavirus began to ravage the United States in the spring of 2020, federal, state and local governments issued temporary bans on many evictions, with an eye on the economic and health consequences of increased homelessness.

The Centers for Disease Control and Prevention (CDC) in September followed up with a nationwide ban that the stimulus deal would extend to Jan. 31.

Still, since the pandemic began, more than 162,000 evictions have been filed in the 27 cities tracked by the Princeton University Eviction Lab.

So far, Congress has no clear plan to deal with the expiration of the CDC’s ban, when up to 40 million people will be at risk of eviction, according to the Aspen Institute. Overnight, more than $70 billion will be owed in back rent and utilities, said Moody’s Analytics Chief Economist Mark Zandi.

The National Alliance to End Homelessness estimated the U.S. homeless population at nearly 600,000 in 2019, before the pandemic hit. The potential health repercussions of a significant increase in that number due to evictions and joblessness are enormous, made exponentially worse by the pandemic, academics and health experts say.

Already, homeless families with babies in New York City shelters live amidst mold, mildew and vermin, according to an audit released on Monday by the city comptroller. Subway closures between 1 and 5 a.m. for COVID cleanings have forced many of the city’s homeless who go there for warmth to burrow deeper into the system’s tunnels or freeze in the tarp encampments and grocery-cart hovels that have become a feature of the city’s sidewalks.

New York City’s homeless die of COVID at a rate 78% higher than the general population, according to the Coalition for the Homeless.

In Los Angeles, several members of the city council want the city to use the convention center as a homeless shelter. San Diego already did that – and now its convention center is suffering a COVID-19 outbreak, with 190 residents and staff testing positive.

Another homeless shelter in Chicago is reeling from an outbreak just as freezing temperatures fuel demand.

Twenty-seven states that let local moratoriums on evictions expire over the summer, before the CDC ban, had a 5.4-times higher COVID mortality rate, according to a report released on Nov. 30 by researchers from Johns Hopkins University and other four other universities.

Phoenix’s unshaded tent city is called “The Zone” by its inhabitants. Some of them call it “Trumpville,” an echo of Depression-era shantytowns named “Hoovervilles” after President Herbert Hoover, who was accused of not doing enough to keep people sheltered.

The Zone’s hundreds of residents are packed together – often not wearing masks, with many living just in sleeping bags or on a tarp. Without running water or plumbing, simple pandemic health protocols, like handwashing, are difficult. Although the city has posted portable toilets and washing stations along the perimeter, feces and garbage litter the property. In some spots, the stench is overwhelming.

COVID is a constant worry. Those who test positive for the virus can check into a 136-bed hotel provided by a nonprofit — if they can get a spot. If they prefer to remain on the streets, there’s a “shelter-in-place duffle” that contains food, water, hygienic supplies, masks and a tent.

Bender, a former foster mom with the leathered tan of someone who lives outside, said the homeless population has become more varied since the pandemic hit – she’s met a former doctor, paralegal and even an opera singer.

“A lot of us want to work, we want to get off the streets,” she said.

But the pandemic has made that seem even more impossible, she said.

“I can’t even get online” to apply for jobs, she said, “because the libraries are closed.” Her congressional stimulus check? “How would I even sign up for that or get that without a computer, or an address?”

“I didn’t think my life could get any worse,” said Bender. “But it did.”

Wed Dec 23 , 2020
Here’s what you need to know: The agreement gives the United States a total of 200 million doses, enough to vaccinate 100 million people.Credit…Whitney Curtis for The New York Times The Trump administration and Pfizer reached a deal to bolster the supply of the coronavirus vaccine made by Pfizer and […] 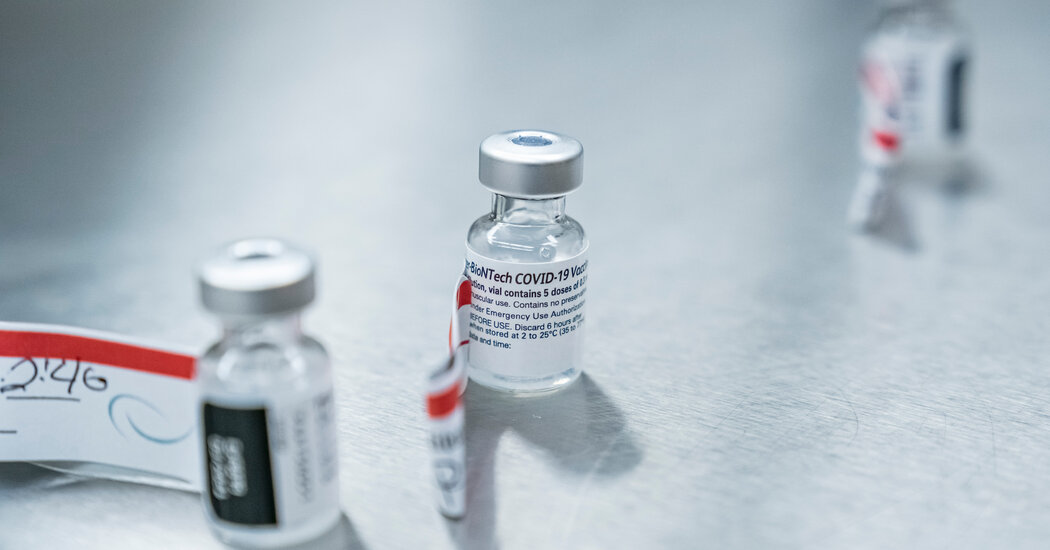