Mar-a-Lago was the place to see and be seen for guests who paid thousands of dollars for the privilege on New Year’s Eve. Diamonds and furs abounded on the red carpet. When Donald Trump arrived at his estate in Palm Beach, Florida, in high spirits and a tuxedo, he declared: “We’re going to have a great year, I predict.”

But earlier that day, a Chinese government website had identified a “pneumonia of unknown cause” in the area surrounding a seafood market in Wuhan. When midnight struck and 2020 dawned, no one could have guessed how this microscopic pathogen would turn the world upside down, infecting 15 million people, killing 625,000, crippling economies and wiping out landmark events such as the Olympic Games.

America is no exception. The coronavirus pandemic has upended the presidential election, which, on Sunday, will be just one hundred days away. It has changed the issues, the way the fight is fought and quite possibly the outcome. The nation’s biggest economic crisis for 75 years, and worst public health crisis for a century, is an asteroid strike that has rewritten the rules of politics and left historians grasping for election year comparisons.

“There is probably nothing the same as coronavirus,” said Thomas Schwartz, a history professor at Vanderbilt University in Nashville. “Obviously, you have issues that stir the public up: 1968 would have been Vietnam and the disturbances that had taken place in the cities. But nothing quite as universal and affecting such a wide band of Americans as the coronavirus. That is really new.”

Soon after that new year’s eve celebration at Mar-a-Lago, Trump would be acquitted by Republicans at his Senate impeachment trial and triumphantly brandish the next day’s Washington Post front page at the White House. In his own mind, at least, he was riding a strong economy on his way to re-election, while Democrats struggled to tally results in their Iowa caucuses or settle on a unifying presidential nominee.

But the virus was on the move. On 22 January, Trump claimed that it “is totally under control” and is “going to be just fine”. On 2 February, he insisted he had stopped its spread by restricting travel from China. On 27 February, he said at the White House: “One day – it’s like a miracle – it will disappear.” And so it went on in what critics now say was a historic feat of denial and failure in leadership.

Covid-19 swept through New York, killing thousands of people. Trump declared himself a “wartime president” and held daily briefings in April but then reportedly “got bored” and switched emphasis to reviving the economy – seen as crucial to his re-election chances. Yet while the infection and death tolls ticked up, his approval ratings ticked down.

Now it seems the old maxim of “It’s the economy, stupid” will be replaced by “It’s the virus, stupid” as the defining issue for voters, not least because the suffering and death have a direct impact on the economy itself: Americans have filed 52.7m unemployment claims over the past four months.

Another famous campaign question, “Are you better off than you were four years ago?”, now seems purely rhetorical. The Trump campaign has been forced to abandon the slogan “Keep America great” in favour of “Make America great again, again”.

Schwartz added: “When Trump had the economy going gangbusters he had a stronger argument on his behalf that, despite his disruptiveness and unpleasantness, people were doing OK and things seemed to be moving ahead. But look at the polling on whether the country’s going in a good direction or a bad direction and, boy, did that spike with the bad direction since March.”

Trump was arguably an unusually lucky president for his first three years, not having to face the type of major crisis that confronted many of his predecessors, enabling him to persist as a gadfly reality TV star tweeting about celebrities instead of reading national security briefs. With the eruption of the virus, that luck ran out spectacularly.

America now has 4m infections and more than 140,000 deaths, the highest tallies in the world. Cases have doubled in the past six weeks even as curves flatten in Europe.

The president continues to defend his response, pointing to travel restrictions he imposed, 50m tests conducted – more than any other country – and mass distribution of ventilators. “We’re all in this together,” he said on Wednesday. “And as Americans, we’re going to get this complete. We’re going to do it properly. We’ve been doing it properly. Sections of the country come up that we didn’t anticipate – for instance, Florida, Texas, et cetera – but we’re working with very talented people, very brilliant people, and it’s all going to work out, and it is working out.”

The pandemic was a moment when Trump could have proved his doubters wrong. He did not rise to the challenge

But his niece Mary Trump, author of a new family memoir, said his handling of the pandemic has been “criminal”. She added: “It was avoidable, it was preventable and even if we hadn’t gotten a hold of it right away, the statistics are pretty clear. Two weeks earlier, what, 90% of deaths could have been avoided? And they haven’t been, simply because he refused to wear a mask because doing so would have admitted that he was wrong about something, and that is something he cannot do.”

The pandemic was a moment when Trump could have surprised the world and proved his doubters wrong. He did not rise to the challenge in the eyes of those critics. He failed to devise a national strategy on testing, rarely spoke of the victims, refused to wear a mask until recently and undermined top public health experts such as Dr Anthony Fauci.

Leon Panetta, a former defence secretary and CIA director, said: “If you operate on the basic premise that crisis defines leadership, then you’d have to say that this crisis has also defined the failure of leadership. That has without question impacted on politics in this country.

“It’s pretty clear that there are a hell of a lot of constituencies out there that feel that he’s failed to lead with this issue. There’s a sense that in many ways he’s basically said, ‘You’re on your own in terms of dealing with this’. He at one point said he doesn’t take responsibility for what’s happening with this virus and I think that sent a real message to the country that the president’s gone awol on the country at a time of crisis.”

Such is the backlash that multiple opinion polls show the Democratic presidential candidate Joe Biden leading Trump by double digits, and ahead in the battleground states that will decide the electoral college. The president’s best hope now might be an “October surprise” in the form of a coronavirus vaccine. There is no clearer example of how everything has changed than Texas, which no Democrat has won since 1976. On Wednesday, a record 197 deaths from Covid-19 were reported while a Quinnipiac poll showed Biden leading Trump 45% to 44%.

Filemon Vela, a Democratic congressman from southern Texas, said: “Since the beginning of the pandemic, President Trump and our own governor, Greg Abbott, have made tactical decisions that are now resulting in the killing of Texans en masse. Any rational thinking Texan would be crazy if they voted for Donald Trump, given the way that the state is being ravaged by the virus.

Against the implacable foe of the virus, Trump has repeatedly sought to divert and distract. He seized on the Black Lives Matter protests against the police killing of George Floyd in Minneapolis not with healing and compassion but by attempting to stoke “culture war” divisions over crime and Confederate statues. Still, the pandemic persisted.

Bill Galston, a former policy adviser to President Bill Clinton, said: “If the election becomes a referendum on the president’s handling of the pandemic, he cannot win. It’s as simple as that and so, barring some miraculously favourable developments in the next hundred days, he has no choice but to change the subject as best as he can.”

The pandemic has not only transmogrified the substance of the election but also the style. Democrats were fortunate to get most their primaries out of the way and mostly unite behind a nominee before the storm hit. Other rituals of the election year calendar – campaign rallies, convention speeches, presidential debates – will be unrecognisable.

So far, the altered landscape appears to be hurting Trump and helping Biden. In 2016, the Republican thrived on rambunctious rallies where crowds chanted “Build the wall!” and, referring to his opponent Hillary Clinton, “Lock her up!” The theatre seemingly gave him a blood transfusion of political energy while building a cult of personality for crowds, often in long-neglected small towns, who then fanned out to spread the word.

Last month, however, a Trump rally in Tulsa, Oklahoma, drew a disappointingly small crowd amid virus fears, and another in Portsmouth, New Hampshire, was cancelled. No more have been announced. The president has also been forced to call off Republican national convention events next month in Jacksonville, Florida, where he had been planning to make a splashy acceptance speech before a cheering crowd.

Democrats will also hold a delayed and pared-down convention in Milwaukee in August, with much of it migrating online. Biden, who at 77 would be the oldest president ever elected, has been able to lie low in his basement in Wilmington, Delaware, spared from the punishment of constant campaigning and awkward encounters that could invite his notorious gaffes. Instead the pandemic plays to his perceived strengths of empathy, experience and stability.

Galston, a senior fellow at the Brookings Institution thinktank in Washington, added: “Nobody’s ever seen anything like this and nobody knows what the net effect is going to be. I don’t know to what extent the raucous Trump rallies of 2016 were instrumental to his success but what we do know is that’s not a strategy that can be repeated in 2020.”

But there may be no greater demonstration of the pandemic’s reach than polling day itself, due to take place on 3 November amid health fears, a surge of mail-in voting and a prolonged count that Trump might seek to discredit and exploit.

This week more than 30 advocacy groups and grassroots organisations joined Protect the Results, a project to mobilise millions of people should Trump “contest the election results, refuse to concede after losing, or claim victory before all the votes are counted”.

Panetta, a former White House chief of staff, has heard similar talk from friends. “On conferences and Zoom calls and emails I’m getting concern that this is not a president who has ever shown a tendency to operate with a degree of class in accepting defeat and so there’s a sense that he will resist the results of the election if it’s close,” he said.

“I guess the hope for a lot of people I’ve talked to is that the election results are so clear that it makes it very difficult for the president to even pretend that somehow the vote was wrong.”

Sat Jul 25 , 2020
null Comic-Con 2020 is in full swing – and there’s a lot to talk about! Thursday saw things kick off with CBS bringing their Star Trek Universe to the virtual showroom floor. Later that day at SDCC, we had The Boys season 3 announcement and a first look at the […] 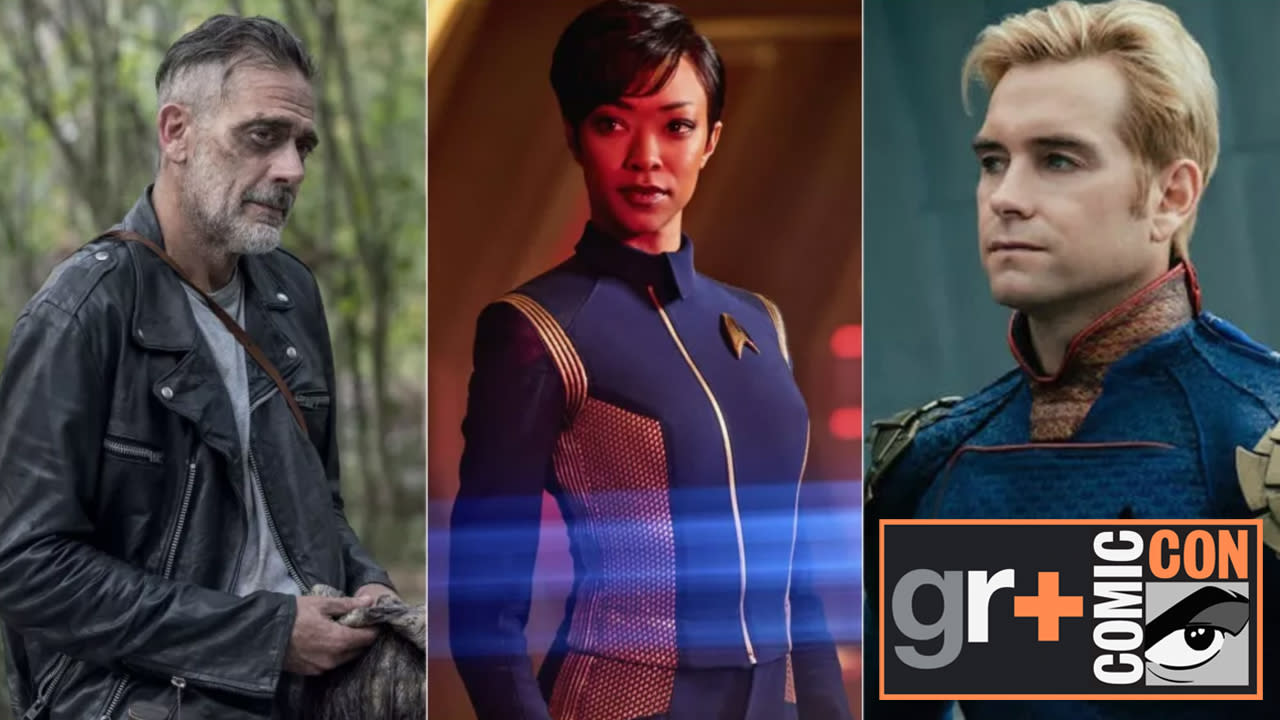