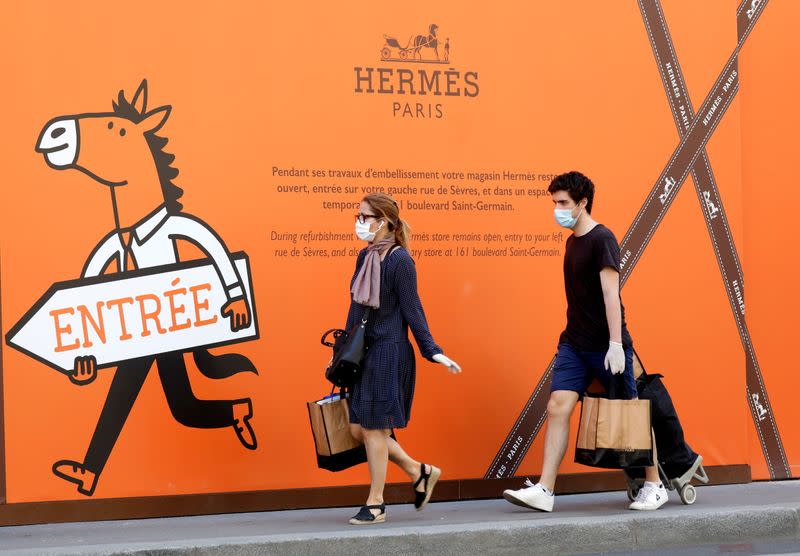 PARIS (Reuters) – Birkin handbag maker Hermes’ comparable sales picked up again in the third quarter, rising 7%, and the group said this positive momentum had extended into October after a rebound in Asia and other regions as some coronavirus restrictions eased.

Luxury goods groups were hit hard by store closures during lockdowns to combat the pandemic.

But a gradual re-opening, even as governments bring in fresh measures to fight rising COVID-19 infections, has helped sales recover. High-end labels, which used to be more reticent to sell their pricey products online, have also seen web revenues surge.

Hermes – known for its $12,000-plus handbags like the Birkin, which often generates waiting lists – already sells a selection of leather goods online but said it would make a larger push.

“We are going to gradually increase our offer of products online, except for the very iconic products such as Birkin,” finance chief Eric du Halgoüet told reporters.

He said the online channel had now become the group’s “biggest store”, with revenues exceeding those of any of its flagship shops. Sales online grew by nearly 100% in all regions in the first nine months of the year.

Hermes’ comparable sales, which strip out the impact of foreign exchange rates and acquisitions, came in at 1.8 billion euros ($2.13 billion) in the three months to end-September.

Revenue from Hermes silk scarves, however, were down 32% in the period. The group said that was due to an unfavourable comparison to a year ago and lower travel retail activity.

In the first nine months of the year, sales were down 11%. Hermes said that for 2020 the impact of the Covid-19 epidemic “remain difficult to assess, as the scale, duration and geographic extent of the crisis evolve every day.”