REMSENBURG, NY — Despite an announcement Monday that 107 school districts statewide had not submitted plans to reopen in the fall — and would not be allowed to open if they failed to submit them — East End school officials are calling foul.

They did, in fact, submit the plans, they said.

Additionally, many submitted incomplete proposals, Cuomo said. Those that don’t have their plans submitted by Friday won’t be allowed to reopen.

“Maybe they just determined they don’t want to open, which is the logical conclusion,” Cuomo said. “But if they want to open, they need to submit.”

A list of those districts was released Monday, and East End officials told Patch they had, in fact, submitted plans and were outraged and shocked to see their names on the list.

“I’m frustrated. I’m horrified,” said Remsenburg-Speonk School Superintendent Denise Sullivan. “I’m a professional who meets my obligations every single day. I canceled my vacation; I’ve worked 14 hours a day to get done what I have to get done.”

Sullivan said she submitted the plan to New York State on July 30 at 7 p.m. and was incredulous to learn that she’d been called out publicly by Cuomo for something she had done properly. “I feel like a little kid being shamed. It’s terrible. We’re professionals. I can speak for every one of my superintendent colleagues. We are all doing so much work. I’ve never worked so hard in my life,” she said. “It’s not fair.”

Not only did Sullivan submit plans on district’s website with hyperlinks to make it easy for parents to find summaries, she also created a video for all to watch. Sullivan said she’s received emails from parents thanking her on the clarity and effort.

“This is totally bogus,” Sullivan said, adding that she has the email to prove the plan was submitted.

Oysterponds School Superintendent Richard Malone, whose district in Orient was also on the list, said there had been a “glitch” in Albany. He said he had been in touch with state officials and has a confirmation statement from the New York State Department of Health, dated July 30 at 10:56 a.m., that the plan had been received.

Officials at the Tuckahoe Common School District in Southampton said the same.

“The Tuckahoe Common School District worked collaboratively with parents, teachers, and health care professionals to create our reopening plan, which was approved by our Board of Trustees on July 28. The plan was posted on our website and submitted to the State Education Department and State Health Department on July 29. Our district should not be on the list,” said Superintendent Len Skuggevik.

Despite objections from school officials, a statement to media outlets Monday, Rich Azzopardi, senior advisor to the governor, disagreed and said the list of districts that failed to file a plan with the state Health Department was accurate.

“Despite clear guidance provided to these schools, which included a link to the DOH portal, some districts in follow-up calls said they filed with the State Education Department — which is not an executive agency — but didn’t file with DOH,” Azzopardi said. “Others filled out an affirmation certifying that they would be abiding by the state’s reopening guidance, but didn’t actually submit their plan, something many of these districts are now rectifying.”

Cuomo said again Monday that parents and teachers, not the state, will be the ultimate arbiters of whether districts have safe reopening plans.

New York’s coronavirus infection rate, which stood at .88 percent Monday, was “great news,” Cuomo said. “If you look at our infection rate, we are probably in the best situation in the country right now.”

All students and teachers must wear masks and adhere to social distancing; masks will be provided to those who do not have them, Cuomo said.

The state’s 749 school districts are required to submit a reopening plan to the state Department of Health and the state Education Department. The DOH has the authority to reject plans, Cuomo said.

The DOH will notify the districts whose plans are incomplete or deficient. If the DOH does not approve a plan, a district will not be able to open, Cuomo said.

How each district decides to reopen is up to its own discretion, whether it’s in-person or a hybrid plan that includes remote learning, he said.

Each school district must post three plans on its website: plans for remote learning, procedures for coronavirus testing and contact tracing — those plans must be posted online by Friday, he said.

Parents need an opportunity to be heard, he said. “The more dialogue the better.”

Also, Cuomo said each school district must host three online discussion session opportunities for parents with questions by Aug. 21, with five such sessions planned for the “Big 5” districts.

Finally, he said, a separate session must be offered for teachers to air their questions and concerns in each district.

There is “no one-size-fits-all” plan for school districts, Cuomo said.

Looking forward, Cuomo said the state will continue to watch the infection rate between now and the first day of school. If there is a spike in the infection rate, the decision to reopen can be revisited but “for planning purposes,” they can reopen, he said.

“We have been clear all along: Health and safety is the most important consideration in reopening school buildings,” he said. “Viral infection rates tell only one part of the story.”

Many educators and parents have anxiety about local school district reopening plans that have been submitted to the state, Pallotta said.

Concerns, he said, include “the lack of guidance on specific procedures for closure, testing and contact tracing in the event of a COVID-19 case in a school. Right now, there may be some areas where parents and educators are confident in their district’s plan, but in many others, we know they aren’t.”

No district should consider themselves ready to reopen buildings until their plans are safe and everything in that plan meant to keep the school community safe is implemented, Pallotta added.
“Being safe means parents and teachers must be confident in the reopening plan, and it is welcome news that districts must meet with parents and teachers this month. We’re thankful the governor agrees that forcing people back into the classroom when they feel their health is threatened is not what should happen. So if districts need to phase in the reopening of buildings, so be it,” Pallotta said. “We must err on the side of caution. Period.”

Communication is key, Cuomo said: “I have been deluged with calls from parents and teachers and there is a significant level of anxiety and concern.”

New York’s school guidance “has been touted as the best in the country,” as has the state’s reopening for the economy, Cuomo said. “If anyone can do it, we can do it — but we have to continue to be smart.”

No school sports have been approved, state officials said.

Across New York, school districts unveiled reopening plans recently. The uncertainty and ongoing debate on whether districts should reopen during the pandemic, has left school communities divided.

Cuomo announced in July that New York schools can reopen only if coronavirus infection rates fell below strict benchmarks that were set in early August.

The formula that Cuomo spelled out allows school openings in regions that are in phase four and have an infection rate under 5 percent. An “emergency” stop to openings will take place if infections rise above 9 percent, he said.

In May, federal health officials released recommendations for reopening schools amid the coronavirus outbreak, including keeping desks 6 feet apart, canceling field trips, shuttering cafeterias and intensifying disinfection of everything from door handles to drinking fountains.

The federal Centers for Disease Control and Prevention unveiled a gradual three-step system and numerous tips and tricks for schools that are preparing to reopen. The suggestions were included as part of a broader reopening roadmap, a 60-page document titled,”CDC Activities and Initiatives Supporting the COVID-19 Response and the President’s Plan for Opening America Up Again.”

This article originally appeared on the Westhampton-Hampton Bays Patch

What to Know Before Using Your Pickup to Tow

Tue Aug 11 , 2020
Consumer Reports has no financial relationship with advertisers on this site. Truck advertisements boast about how much a pickup can tow, with demonstrations of stunning feats such as hauling a space shuttle down a city street. But the reality is, the typical pickup at the dealership has much more humble […] 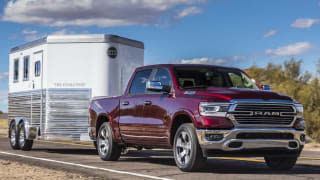