Releasing a movie as a first-time filmmaker during a pandemic isn’t an ideal scenario. Unless you’re Dave Franco, who deftly makes the shift from screen actor to feature director with “The Rental,” his new low-budget horror movie starring an indie dream team including his wife Alison Brie, Dan Stevens, and Sheila Vand. “We’re obviously living in a new world, and everyone is finding different ways to release their films,” said Franco in a recent interview, whose movie, which opens digitally from IFC Films on July 24, premiered in June at the Vineland Drive-In outside Los Angeles.

“It’s not exactly what I imagined for the person public screening of my film, but in certain ways, it was better. Most premieres make me feel anxious, and this one just felt more relaxed, and like a communal experience. It was essentially a bunch of movie lovers coming together to have joint experience,” Franco said. The comic actor, who cowrote “The Rental” alongside indie mainstay Joe Swanberg, has also pulled off the unique challenge of releasing his film without a festival premiere.

“With the timing of the edit and the pandemic happening, we actually never had the opportunity to even submit to any festivals,” Franco said. “At first, I was a little disheartened by that because I had this idea in my head of doing a festival run and traveling all over the country with my wife. But actually we’re going to be playing in more theaters than we originally had planned.”

Despite the director’s star wattage, “The Rental” is the kind of niche genre movie that would play well at a festival like Sundance or SXSW, but is hard to push out into the world without word of mouth to back it. Yet, Franco said that the pandemic has actually served indie films like his well.

“Indie films are getting a little bit more of a spotlight, partially because we are not competing with these giant summer blockbusters, but also because people need new content,” he said. “I look at recent indie films film like ‘Palm Springs’ and ‘Relic,’ and it feels like everyone’s talking about them. It’s nice that these really well-executed indie movies are getting the attention they deserve.”

In “The Rental,” two couples retreat to an oceanside getaway hoping to escape their problems but are met with many more when they discover that the host of their Airbnb might be spying on them. What should have been a weekend of celebration takes sinister turns as buried secrets among the four old friends come crashing down. With the help of co-writer Swanberg, “The Rental” has elements of easy, breezy mumblecore mashed with edge-of-the-seat horror.

Franco didn’t originally intend to direct the movie, and was just going to star in the role that ultimately went to Jeremy Allen White. “When I did decide to direct it, I made a major choice to just focus on my responsibility behind the camera,” said Franco, who felt he knew the material better than anyone else, and avoided the vanity-project trap of casting himself.

Franco previously directed the Funny or Die short “Dream Girl,” but he said that didn’t necessarily prepare him for tackling the feature world. “I realized I knew these characters and the story more intimately than anyone, and all of my fears just started to go away,” Franco said. He made the film with wife Brie, with whom he’s also been writing a romantic comedy during the quarantine.

One of the major plot points best left unspoiled in “The Rental” is an intense rivalry between brothers, so much so that you have to wonder, does Dave Franco hate his brother?

“The movie has nothing to do with me and my brother [James Franco],” Franco said. “One of my friends recently watched the film and he pointed out something I didn’t even really realize, which is in the very first scene. There’s a moment where the younger brother [White] is essentially trying to get the approval of his older brother [Stevens], but at the same time he doesn’t really want it. He doesn’t know how to even bring certain things up to his brother without feeling insecure, and that’s more of a reflection of our relationship. Maybe 10 years ago, when he looked at me as a baby bro, as opposed to now here he finally sees me as a real person who is equal.”

Another major element of “The Rental” is paranoia over staying in an Airbnb, who might have stayed there before you, and is maybe still staying with you now. “I was inspired by my own paranoia about the concept of home-sharing, and thinking about how the country is as divided as it’s ever been, and no one trusts each other, yet we trust living in the home of a stranger because of a few positive reviews online,” he said.

While Franco said he’s never personally had a nightmare Airbnb experience, he did have a harrowing hotel experience. “I was staying in a pretty dingy hotel during the filming of a movie, and I didn’t want to be the pretentious actor who asked production to move into a better hotel. But one day, I woke up, and there was a blotch of dried blood next to my face. I checked my body, and I was not bleeding, and so I guess that was the ‘new sheet’ that housekeeping put on the bed that day. That was the final straw for me and I forced production to move me,” he said. “A stranger’s blood next to my face is where I draw the line.”

“The Rental” isn’t going to leave audiences feeling any less queasy about their Airbnb anxieties, but it’s a refreshing slice of escapism at a moment where plenty of other, far worse anxieties reign.

Mon Jul 20 , 2020
Tempest Defence Secretary Ben Wallace issued an extraordinary appeal for more countries to join the UK’s Tempest programme to build a new fighter jet as he help launched the online version of the Farnborough airshow. Speaking after the landmark trade show was cancelled because of coronavirus, Mr Wallace urged other countries to […] 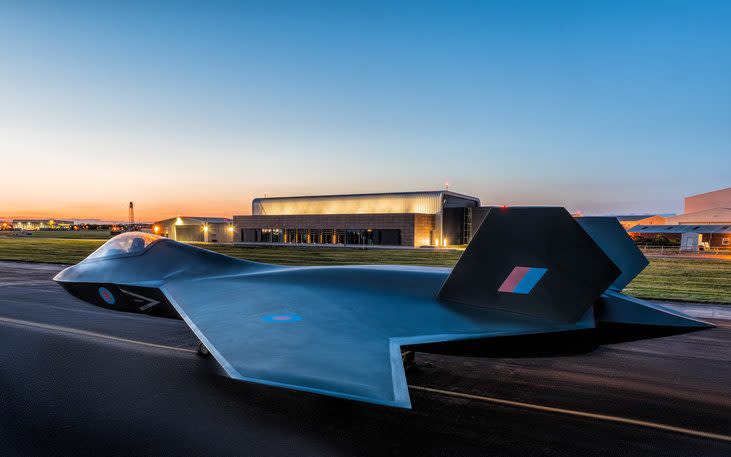