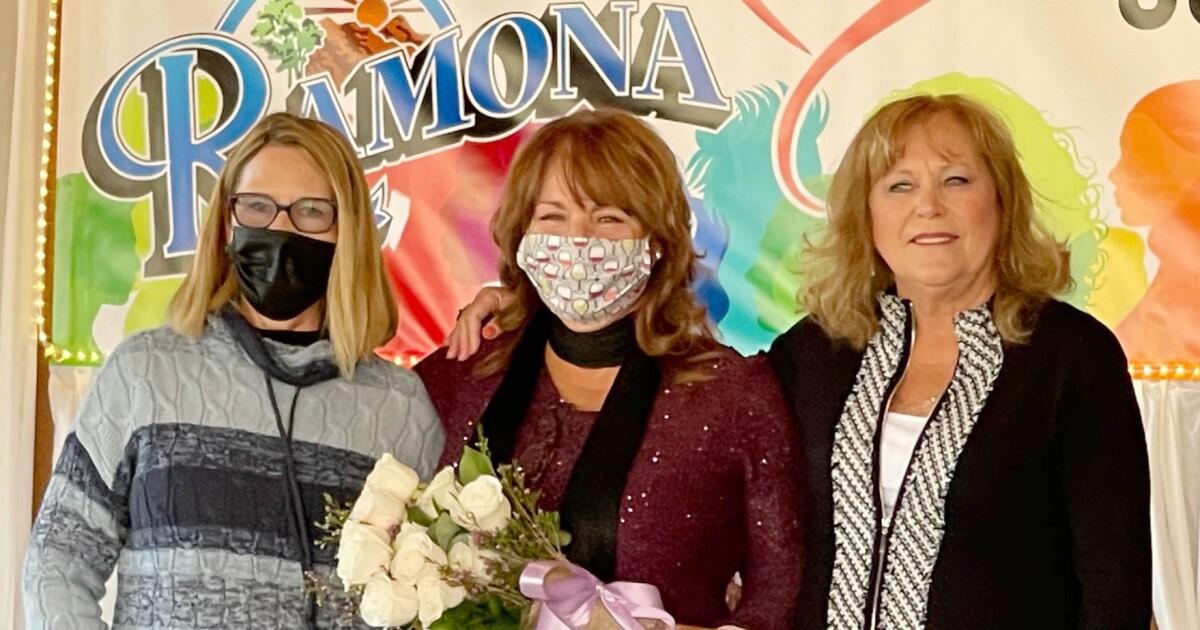 “Strength in Community” was the theme of the Ramona Chamber of Commerce’s Community Awards for 2020 recognition ceremony held outside for the first time.

“It’s important to recognize people who make our community as strong as it is,” said Domnitz at the start of the socially distanced awards ceremony.

A slate of 2021 Chamber directors were introduced on stage. However, the 14 directors were previously sworn into office during a Jan. 13 Facebook Live event at Ramona Town Hall that can be seen online at https://www.facebook.com/watch/live/?v=720623445171950&ref=watch_permalink.

Outgoing directors Fowler, Galloway and the late Bob Murray were also recognized. Posthumous awards were given to Murray and Don Owens. Murray was given special recognition for his 12 years of service to the Ramona Chamber and dedication to its scholarships and educational program grants. Before passing on May 28, 2020, Murray was also an active member of the Ramona Veterans of Foreign Wars Post 3783 and the Ramona Rotary Club.

“He was a patron and supporter of all things Ramona,” Galloway said of the former Java Hut owner. “He was tireless in his efforts. Rest in peace friend, you will never be forgotten.”

Among four candidates for the Business of the Year award, Carole Wylie of Wylie Architecture Planning Interior Design, Inc. stood out as exemplary of a strong business, event organizers said. Other nominees were Jensen Properties, STEM Studio and Ramona Home Journal.

In Ramona, Wylie has designed 28 new commercial buildings and 35 new houses from the ground up. Her first ground-up project was Mi Ranchito Taco Shop in the early 1990s, and since then she has left her mark on The Pott Belly Shop, Tractor Supply Co. and recently the Panda Express buildings.

The years went fast, Wylie said, but along the way she’s met people of diverse backgrounds and made some really good friends.

“Some people reach out to me because they appreciate the house and want to meet me,” she said. “Ramona’s so great. I’ve been really lucky to get this opportunity.”

“I just do my work project by project and I love what I do. It doesn’t just get filed in a drawer, it’s out there and people see it,” she said. “Getting this award validates I’ve done something positive rather than negative.”

The winner was Frosted Faces Foundation, which is dedicated to finding homes for older dogs and some cats. Funded largely by donations and grants, Frosted Faces at 1448 Pine St. ensures the animals get quality veterinary care.

“We are so proud to be recognized as Nonprofit of the Year by the Ramona Chamber of Commerce,” said Kelly Smisek, who is the Frosted Faces Foundation founder and operator with husband Andrew Smisek.

“We and the volunteers work very hard every day so that these abandoned senior animals can have the dignity and care they deserve. To have our efforts recognized and embraced by the very community we operate in only brings more awareness to the cause and changes more hearts toward senior pet adoption.”

Art Thomsen, 82, was given special recognition with the Lifetime Achievement Award. Thomsen’s family moved to Ramona from Downey, Calif., about a year before he graduated from Ramona High in 1956. He and his wife, Linda, a 1957 Ramona High grad, had three children, Marjie, 59; Joani, 60; and Artie, 61; in addition to nine grandchildren and nine great-grandchildren.

Among his credits, Thomsen has been maintaining the 150-plus acres overseen by Ramona Parks and Recreation Association for the past 50 years. The property includes the Ramona Outdoor Community Center and Wellfield Park. Thomsen’s many volunteer duties include maintaining the riding trails, picking up trash and weeding the common areas.

Thomsen said he aims to support recreation in Ramona by clearing the grounds that are used for activities such as the Ramona Junior Fair, rodeos, 4-H Club, weddings and baseball games.

“I’ll do whatever it takes to make this a welcome place to the local people of Ramona,” he said.

Thomsen was quick to point out that it takes many volunteers to maintain the facilities there. And he complimented his family for supporting his endeavors, including his wife Linda, who is in charge of renting space for events.

“It’s not just me, it’s everybody in the community who has been supporting the park for a lot of years,” Thomsen said. “I’m just a small guy keeping things going for the park. I’m not out there for an award but I’m appreciative that they gave an award to me and my family.”

Tim Connelly, a contributor for Ramona Home Journal, was named Citizen of the Year. Connelly was recognized for his efforts as a salesperson for 27 years and as one of the founders of the Love my Ramona Facebook page, which is dedicated to celebrating the country town of Ramona. Other candidates were Marcie Laws-Hayes, owner of STEM Studio and Generations Day Care; and Kim Lasley, a Ramona Unified school board member.