Sony has now revealed the new PlayStation Now games they’re adding in February, and it’s one of the service’s busier months in a while. Detroit: Become Human, Little Nightmares, Hotline Miami 2, and more are getting permanently added to PS Now, while Call of Duty: Black Ops III and WWE 2K Battlegrounds are joining on a temporary basis. 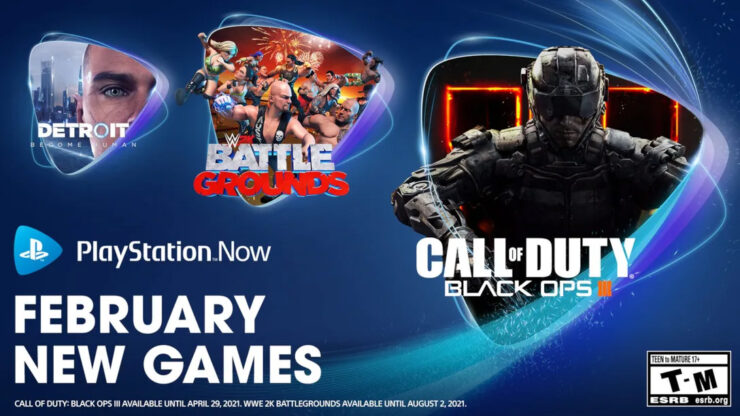 Watch the Little Nightmares 2 Trailer and Try the New Demo

Here are some more details on the new PS Plus additions:

Tackle Treyarch’s story campaign solo, or squad up with another player in local split-screen or online. When you’re ready for something different, switch cybernetic foes for supernatural enemies with the cooperative Zombies mode, or put comradeship aside for the competitive action of Multiplayer mode. Both can be played either in four-player local split-screen or online.

The world of WWE is your battleground with over the top, arcade action as your favorite WWE Superstars and Legends battle in interactive environments around the world. Play through a new story mode while unlocking unique characters and Battlegrounds. Compete using special abilities and power-ups in match types like Steel Cage, Royal Rumble, and more! Compete in Online Tournaments or stake your claim as King of the Battleground against players from around the world!

Decide the fates of three lives – and maybe even the future of an entire city – in this narrative-driven sci-fi thriller. Confront tough moral dilemmas and thought-provoking situations faced by a trio of human-like androids – Connor, Markus and Kara – as their stories play out against the backdrop of a near-future America. In this branching narrative, every choice you make has consequences.

Embark on an action-packed quest to take down a demonic king in this isometric dark fantasy adventure. Freely switch between the dual gunplay of Strife or wield the sword of War when journeying solo, or have the two Horsemen unite their powers when playing in local or online co-op. Explore, solve puzzles and battle enemies to uncover a conspiracy that threatens to unravel all of creation.

Immerse yourself in Little Nightmares, a dark whimsical tale that will confront you with your childhood fears. Help Six escape The Maw – a vast, mysterious vessel inhabited by corrupted souls looking for their next meal. As you progress on your journey, explore the most disturbing dollhouse offering a prison to escape from and a playground full of secrets to discover. Reconnect with your inner child to unleash your imagination and find the way out.

Hotline Miami 2: Wrong Number is the brutal conclusion to the Hotline Miami saga, set against a backdrop of escalating violence and retribution over spilled blood in the original game. Follow the paths of several distinct factions – each with their own questionable methods and uncertain motivations – as unforeseen consequences intersect and reality once again slips back into a brilliant haze of neon and bloodshed.

New PlayStation Now subscribers can get 7 days for free, after which, the service is available for $10 a month. You can check out the full list of games currently available here.

Any PlayStation Now subscribers out there? Which of the new games will you be jumping into first?

How to take greener family vacations