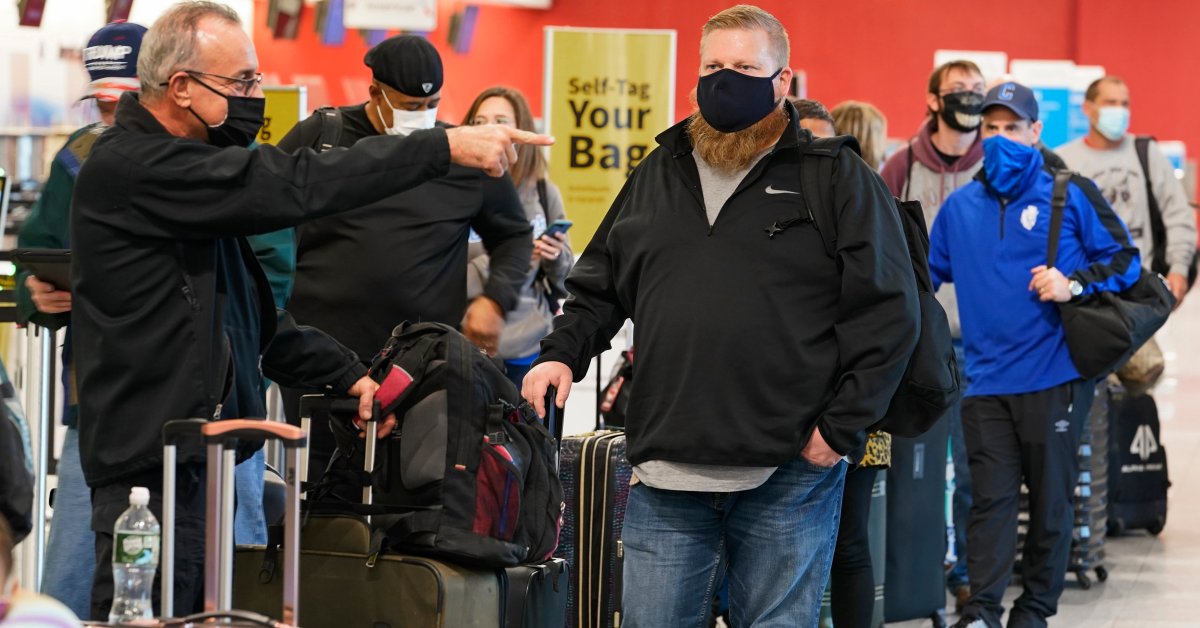 Millions of Americans took to the skies and the highways ahead of Thanksgiving at the risk of pouring gasoline on the coronavirus fire, disregarding increasingly dire warnings that they stay home and limit their holiday gatherings to members of their own household.

Those who are flying witnessed a distinctly 2020 landscape at the nation’s airports: plexiglass barriers in front of the ID stations, rapid virus testing sites inside terminals, masks in check-in areas and on board planes, and paperwork asking passengers to quarantine on arrival at their destination.

While the number of Americans traveling by air over the past several days was down dramatically from the same time last year, many pressed ahead with their holiday plans amid skyrocketing deaths, hospitalizations and confirmed infections across the U.S.

Some were tired of more than eight months of social distancing and determined to spend time with loved ones.

“I think with the holidays and everything, it’s so important right now, especially because people are so bummed out because of the whole pandemic,” said 25-year-old Cassidy Zerkle of Phoenix, who flew to Kansas City, Missouri, to visit family during what is traditionally one of the busiest travel periods of the year.

She brought snacks and her own hand sanitizer and said the flight was half full. She had a row of seats to herself.

“As long as you’re maintaining your distance, you’re not touching stuff and you’re sanitizing your hands, people should see their families right now,” she said.

The U.S. has recorded more than 12.7 million coronavirus infections and over 262,000 deaths. The country is still missing about eight infections for every one counted, according to a new government report Wednesday. Many people don’t get tests, especially if they don’t have symptoms.

More than 88,000 people in the U.S. — an all-time high — were in the hospital with COVID-19 as of Tuesday, pushing the health care system in many places to the breaking point, and new cases of the virus have been setting records, soaring to an average of over 174,000 per day.

Deaths have surged to more than 1,600 per day, a mark last seen in May, when the crisis in the New York area was easing.

The Centers for Disease Control and Prevention and state and local authorities have begged people not to travel and urged them to keep their Thanksgiving celebrations small.

“That’ll make sure that your extended family are around to celebrate Christmas and to celebrate the holidays next year,” Kentucky Gov. Andy Beshear said.

But even Denver Mayor Michael Hancock flew to Mississippi to spend Thanksgiving with his wife and youngest daughter despite sending messages on social media and to city staff asking them to avoid traveling for the holiday. He apologized, acknowledging that he went against his own public guidance.

“I made my decision as a husband and father, and for those who are angry and disappointed, I humbly ask you to forgive decisions that are borne of my heart and not my head,” Hancock said.

About 900,000 to 1 million people per day passed through U.S. airport checkpoints from Friday through Tuesday, a drop-off of around 60% from the same time a year ago. Still, those were some of the biggest crowds since the COVID-19 crisis took hold in the U.S. in March.

Last year, a record 26 million passengers and crew passed through U.S. airport screening in the 11-day period around Thanksgiving.

More Americans drive than fly during the holiday, and AAA has projected those numbers are also likely to be lower this year. How much lower the auto club has not said.

Many states and cities have adopted precautions. Travelers to Los Angeles, either by plane or train, were required to fill out an online form acknowledging California’s request that people quarantine for two weeks after arrival in the state.

Thea Zunick, 40, boarded a flight from Newark, New Jersey, to Florida to see her 90-year-old grandmother and her parents.

“We’ve all kind of decided like it’s worth the risk,” Zunick said. “But I wanted to make sure that all the efforts that I’ve made to stay healthy isn’t undone by other people’s carelessness. And absolutely, I know that I’m taking a risk by flying. I know that, but sometimes it’s necessary.”

She isolated at home for days before the trip, got a COVID-19 test that came back negative and made sure to choose an early and direct flight. She also masked up and layered a face shield on top.

“I felt like an astronaut, to be honest,” Zunick said.

Once at the airport, Zunick said, she saw poor adherence to mask-wearing, loose enforcement of rules, long lines to check baggage and a disregard for social distancing in security lines.

Once she boarded her completely full flight, with middle seats occupied, she watched passengers eat and drink with their masks pulled down and sat next to a passenger wearing a loose bandanna, prompting her to call over a flight attendant, she said.

“I said to the stewardess, ‘Hey, the person next to me, is that permitted? Because it’s making me uncomfortable.’ They’re like, ‘Oh, yeah, that’s fine.’ But it’s not,” Zunick said. “The bottom of it was open. And it was tied so loosely that it kept falling down throughout the flight and he kept messing with it and trying to make it tighter and pull it up.”

Anne Moore, a 60-year-old woman from Chicago, flew to Albany, New York, to be with her daughter for the holiday. Her daughter is a senior at Dartmouth College, and Moore and her husband were worried about her driving back to Illinois by herself.

Before the spike, the family had planned to hold a Thanksgiving gathering of fewer than 10 people. But instead it will be just Moore, her husband and her daughter.

“I have friends who are alone. And I’m not inviting them. And I feel badly about that,” she said. “We’ll take a walk or something instead. But yeah, the three of us are isolating.”

The Coronavirus Brief. Everything you need to know about the global spread of COVID-19