Florence Pugh and Zach Braff took their time making their relationship official, but fans and internet sleuths alike were in on the love story before the two posted their first couples’ Instagram post.

While their age difference became social media fodder, Pugh is 24 and Braff is 45, the pair has managed to not let the criticism get in the way of their adorable relationship. From a  trip to Disneyland, to unlikely family friendships, and a very cute dog here’s everything to know, about their relationship.

Braff casts Pugh in his short film, In The Time It Takes to Get There. Plus, he starts to like posts on her Instagram feed, which is definitely the first step in any modern-day love story. On Twitter, Braff calls Pugh a “movie star.”

In The Time It Takes to Get There officially gets released. It stars Pugh and Alicia Silverstone and just as the short film hits the internet, Braff and Pugh are spotted together in New York City. The relationship comes after Braff split with model Taylor Bagley. They dated for five years.

So Florence Pugh is definitely dating Zach Braff, right? He just Insta Storied a photo of her playing guitar in his apartment.

Braff posts a photo with Game of Thrones actor Toby Sebastian. No big deal, right? Well, he happens to be Pugh’s older brother.

ELATED: Florence Pugh Has a Message for Critics of Her Relationship with Zach Braff

The two are spotted together at a wedding in the U.K.

Pugh makes her debut on Braff’s Instagram feed. His caption? “People I love.” That’s quite the statement. A source told Page Six, “It was very clear to me that they’re a couple.”

They make their official Instagram debut a month later. Braff shares a snapshot from a day at Disney California Adventure Park. That same month, they both attend the L.A. premiere of Marriage Story, only they don’t actually get photographed together.

RELATED: Florence Pugh Sounded Off On the Backlash Over Her Relationship with Zach Braff

The same thing happens at the premiere of Pugh’s flick Little Women. They both go to the NYC premiere, but they’re not snapped together. Fans don’t get the red carpet debut they so desperately want.

An official relationship post wouldn’t come until the end of the month. Braff comments on one of Pugh’s IG posts. A troll writes, “You’re 44 years old,” and Pugh claps back, writing “and yet he got it.”

People reports that the two celebrate Pugh’s Oscar nomination. She’s up for Best Supporting Actress. The magazine also reports that Braff and Pugh are set to work together again. He’ll direct her in the upcoming film The Secret Ingredients of Rocket Cola.

According to People, the couple is seen prepping for the coronavirus lockdown at an L.A. Whole Foods. Pugh was sitting on the back of Braff’s motorcycle.

RELATED: Florence Pugh Says All the Criticism on Her Relationship With Zach Braff Is Belittling to Women

Both Pugh and Braff post about a foster puppy named Billie that they’re keeping safe and sound during the coronavirus pandemic. Billie makes an appearance in Pugh’s celebratory birthday post for Braff.

“Today we shall smile wider than the clouds are grey. April 6th and we’re celebrating hard! Happy Birthday wishes, boogies and cheers for this special person. Raise those bubbles and jiggle!” she wrote.

Almost immediately, she has to defend her relationship from online critics.

“On Monday, I posted a photo in honor of Zach’s birthday and I wrote a birthday message underneath. Within about eight minutes of the photo being posted, I had about 70 percent of the comments hurling abuse and being horrid — basically bullying someone on my page,” she said in an IGTV post. “It is the first time in my entire Instagram life that I’ve had to turn off the comments on my page. I’ve never been an Instagram page that encourages that. I’ve never been an Instagram page that likes that toxic vibe.”

“The abuse that you throw at him is abuse that you are throwing at me, and I don’t want those followers. I do not want to have to be protecting my comments every time I post a picture of him. I really hope that I can continue this relationship with a lot of you,” she finished.

Mon Aug 3 , 2020
PA This week, the Met Office has warned that a heatwave is set to sweep over parts of the UK, with temperatures expected to soar as high as 36C in the south-east on Friday. With the arrival of warmer weather and many still anxious to plan trips abroad, it is […] 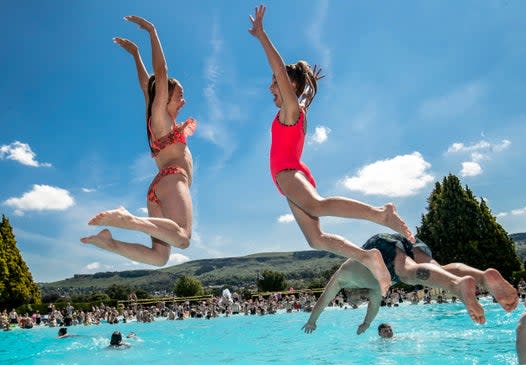