Tourists wanting to enjoy the grandeur of Yosemite National Park this summer will have to make a reservation to enter, rangers announced Thursday.

The popular destination will once again require day-use reservations in an attempt to curb the spread of COVID-19, according to a news release.

The reservation system will go into effect beginning May 21 and last until Sept. 30. Prospective visitors can place an online reservation beginning 8 a.m. April 21 at Recreation.gov.

More: Yosemite ‘firefall’ returns to national park this week. Here’s how to see the phenomenon

More: Fickle ‘firefall’ leaves some Yosemite visitors disappointed. For others, ‘chase is half the fun’

The reservation system was first introduced at the onset of the pandemic and California’s stay-at-home order. It returned temporarily in February to deal with the influx of visitors hoping to see the popular “firefall” attraction, which is only visible for about two weeks each year when certain conditions are meant.

Though case rates are improving, many Central Valley counties remain in the red and orange tiers of California’s “Blueprint for a Safer Economy” plan, meaning most businesses are only able to operate indoors with limited capacity.

Gov. Gavin Newsom announced that most of California’s economy will reopen on June 15 provided vaccines are readily available and hospitalizations remain low. 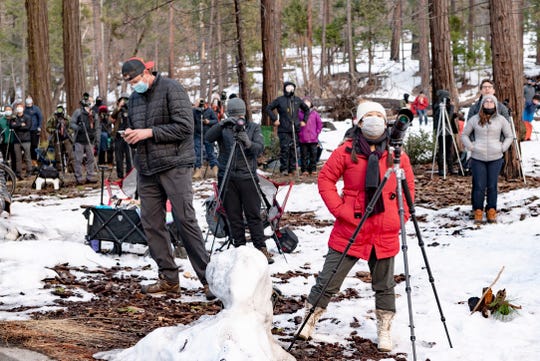 Mickie Lee of San Jose and other photographers watch the light change on Horsetail Fall in Yosemite National Park on Tuesday, February 16, 2021. Hundreds of photographers turn out for the annual phenomenon hoping to catch the fallÕs water as it passes through a narrow slit of rays from the setting sun in mid February. This was LeeÕs third attempt in as many days due to uncooperative weather. (Photo: Ron Holman / Visalia Times-Delta)

How do the reservations work?

Each day-use reservation is valid for one vehicle and its occupants. Visitors will have to show proof of their reservation and a matching photo ID at the entrance station, officials said. The permit is valid for three days of reentry, down from the typical week of reentry.

Lifetime and annual pass holders will also need a reservation. People staying at The Ahwahnee Hotel, Yosemite Valley Lodge, Wawona Hotel and other NPS-managed hotels and campgrounds will have a pass included with their lodgings.

Day-use reservations are also included for all visitors with wilderness and Half Dome permits and visitors entering the park via shuttle buses and on permitted commercial tours. 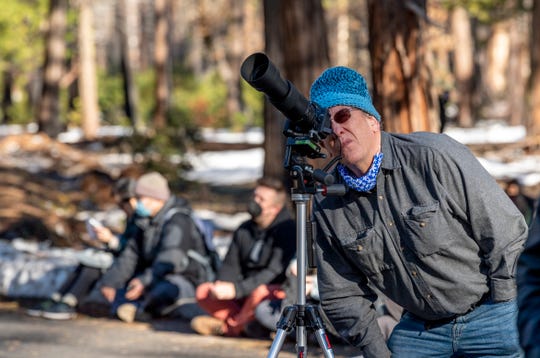 Dick Breinlinger of Dublin and other photographers begin setting up cameras hours before sunset at Horsetail Fall in Yosemite National Park on Tuesday, February 16, 2021. Hundreds of photographers turn out for the annual phenomenon hoping to catch the fall water as it passes through a narrow slit of rays from the setting sun in mid February. (Photo: Ron Holman / Visalia Times-Delta)

Joshua Yeager covers water, agriculture, parks and housing for the Visalia Times-Delta and Tulare Advance-Register newspapers. Follow him on Twitter @VTD_Joshy. Get alerts and keep up on all things Tulare County for as little as $1 a month. Subscribe today.

Fri Apr 9 , 2021
The Daily Beast A Crazed GOP Wants to Cancel Baseball, Coke and Big Business Elizabeth Brockway/The Daily BeastWhat’s left after the GOP cancels itself? You could get whiplash trying to track conservatives’ hypocritical mental gymnastics, but there is a common theme: Conservatives believe in a one-way relationship with America where […]