HAMAMATSU, Japan — Yamaha Motor, the world’s third-largest motorcycle maker, is stepping up marketing to attract new customers mainly in Asia such as Indonesia and India, its biggest markets, based on connectivity via a smartphone app.

The new business strategy is aimed at developing Yamaha into a company that not only manufactures motorcycles but also sells experiences based on custom-made functions, to provide an edge over the competition.

In February, Yamaha released the latest model of its mainline NMAX scooter in Indonesia, the biggest motorcycle market for the Japanese maker, representing its first marketing attempt in the world using an innovative smartphone app called “Yamaha Motorcycle Connect X.”

Through short-range Bluetooth wireless technology, the app collects information on the bike’s engine speed, driving range, location and other operations, which are monitored by its control unit. The information is analyzed by Yamaha’s data management platform, enabling the driver to keep track of fuel consumption and receive warnings of possible malfunctions.

Some 28% of the company’s unit sales went to Indonesia in 2019. As Southeast Asia’s most populous country is flooded with bikes, the app also helps drivers find their machine easily in a parking lot.

Based in Iwata in the central Japan prefecture of Shizuoka, Yamaha will make use of the accumulated data to analyze glitches and plan new products. It will also provide wireless software updates of bikes.

Although the additional functions Yamaha will offer have yet to be determined, it is considering a system to adjust ride comfort for each individual driver.

Yamaha plans to advance its ambitious “connected motorcycle” strategy by stages toward the final goal of offering advanced services through connection with 200 million customers by 2030.

The connected bike app will serve as a contact point between Yamaha and its customers. The company plans to initially offer more than 200,000 such bikes, or 4% of its global annual sales, by 2021. Already adopting “functions for connection” in some of its marine products, Yamaha envisions providing them in all products by 2030.

“Selling products is not the end of our business, as we wish to increase earnings opportunities by offering experimental services matching individual customers’ needs,” said Norio Yamada, executive officer heading Yamaha’s IT Center.

A program the company launched under the name of Destination Yamaha in the U.S. and Europe to introduce appealing touring spots around the world is an example of services that will provide opportunities for adventure experiences. Yamaha plans to propose custom-made tours for individual customers in the future.

While the service targets motorcycle enthusiasts, it also represents a challenge in the industry as a whole — development of customers among young people, including the so-called “digital natives” of Generation Z, born in the mid-1990s to early 2010s, who have stayed away from motorcycle shops and have shown little interest in bikes.

Yamaha started online sales of motorcycles in India in August to establish connection with potential customers via the internet. Various models are displayed on Yamaha’s virtual shop, showing each machine from all angles. Although buyers still need to visit physical shops to receive their purchases and receive maintenance services, they can make down payments and subscriptions online. 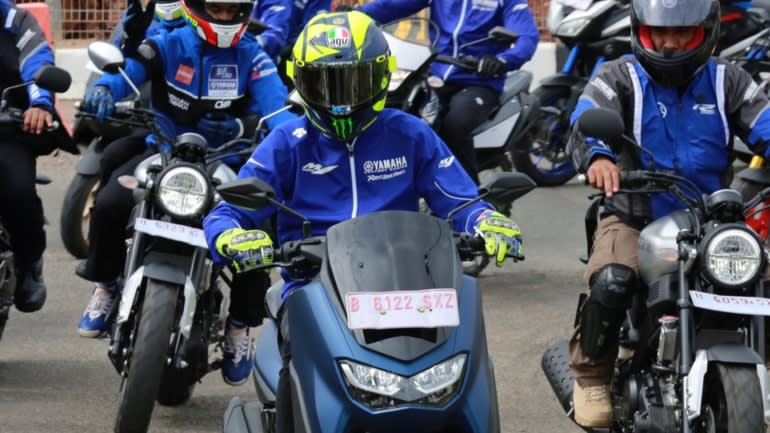 A driver test-rides the latest model of Yamaha’s NMAX in Indonesia. (Photo courtesy of Yamaha Motor)

The company is also reliant on India, with 13% of its world motorcycle sales last year. The online service was available at 300 Yamaha shops across India as of mid-October and will become possible at the remaining 200 by stages.

Yamaha will launch the online sales in earnest in Brazil in 2021. “We will also introduce the service in other regions by taking their features into account,” said Tatsumi Okawa, director and head of Yamaha’s digital and IT operations.

Yamaha is pushing ahead with operational reforms with a sense of crisis. Global sales of motorcycles totaled 53.36 million units in 2019, up 8% from a decade earlier, led by emerging markets such as Southeast Asian nations and India, according to a survey by Yamaha.

But the company incurred a 13% sales drop to 5.05 million units during the period and its market share shrank by 2.3 percentage points to 9.5%. Yamaha is affected by the maturation of markets in developed countries and is experiencing sales declines in emerging markets.

Honda Motor, with a global market share of 36.6%, is stepping up its offensive in Southeast Asia. Among the market’s strong competitors is Indian competitor Hero MotoCorp with a 12.8% global share and is the second-biggest maker in the world’s largest motorcycle market.

In the connected-car sector, American electric vehicle maker Tesla has upgraded its software to offer functions such as extending an EV’s driving range when necessary. Although connected motorcycles lag behind automobiles, they represent an opportunity to expand its business, Yamaha believes.

Unlike with car navigation systems, information available to drivers of motorcycles is limited. Apps that provide information on safety and destinations while driving would be helpful.

Value-added experience services for recreational riders, such as support for touring and connection among drivers, are among the additional offerings being considered.

Hiroyuki Yanagi, chairman of Yamaha, once said, “Motorcycles are not a business that will last eternally.”

Yamaha’s new product serves as a test for manufacturers’ attempts to shift to service-oriented operations. Promoting the “leapfrogging” strategy of introducing digital technology-based operations in emerging market, Yamaha will also accelerate the experience services business through such measures as support for domestic and overseas motorcycle tours.

Pandemic accelerates move to e-commerce for some local shops | Business

Sun Nov 15 , 2020
HUNTINGTON — COVID-19 totally changed the way The Haute Wick Social does business, according to owner Ashley Casto. “The pandemic blew up my whole business model,” Casto said. “We went from an in-person experience to an online and social media experience.” The Haute Wick Social, located in Heritage Station in […]