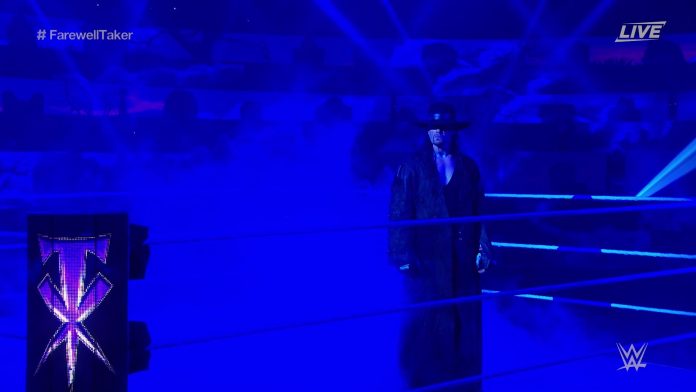 Omaze, an online fundraising platform which offers once in a lifetime opportunities while supporting causes around the world, went LIVE with a partnership with WWE Superstar Legend Undertaker and Make-A-Wish, an organization that has brought transformational wishes to more than 330,000 children and families. Enter for your chance to be flown to Orlando; meet Undertaker, tour the WWE Performance Center, create your own custom ring entrance, take photos and score signed merchandise.

More information on the campaign can be found here: omaze.com/undertaker

**Please note, your safety and peace of mind is our top priority, so this experience will be scheduled when it’s safe to travel and convenient for our partners.

YOU AND A FRIEND WILL:

-Join Undertaker for a tour of the WWE Performance Center in Orlando
-Have “The Phenom” coach you through your own custom ring entrance
-Get to know one of the greatest WWE Superstars of all time and take a photo to prove it
-Score exclusive WWE merchandise, including a WWE Championship signed by Undertaker
-Be flown out to Florida and put up in a 4-star hotel

One of WWE’s most legendary Superstars, Undertaker, is inviting you and a friend to join him at the WWE Performance Center for an unforgettable experience. You will receive an exclusive tour of the facility. Take some truly epic photos; and even step into the ring with “The Deadman” to create your own custom ring entrance! Flights, hotel and autographed WWE Championship included.

For 40 years, Make-A-Wish® has brought transformational wishes to more than 330,000 children and families. But they’re not done yet. No matter the circumstances, every child deserves a childhood. Life-changing wishes wouldn’t happen without the power of donors like you. Right now there are thousands of children whose wishes have been delayed because of COVID-19. Your support today will give these children much-needed hope for brighter days ahead.

MORE ABOUT THE COMPANY BEHIND THE ONCE IN A LIFETIME OPPORTUNITY:

Omaze is an online fundraising platform that offers once-in-a-lifetime experiences and prizes to support nonprofits around the world. Omaze campaigns connect influencers, nonprofits and donors to create lasting impact, and have raised funds and awareness for more than 350 charities with donations from over 180 countries. Omaze has raised more than $130 million for causes to date, and was named to the 2020 list of Fast Company’s Most Innovative Companies.

How to watch every Star Wars movie and TV show, from Darth Vader to Baby Yoda

Tue Nov 24 , 2020
Join me, and explore the Star Wars movies and shows for the first time. Lucasfilm Tempted by the hype around The Mandalorian season 2 but put off by the long history of Star Wars? The sci-fi saga is one of those vast long-running franchises that social media gets extremely excited […]