MENOMONIE — After months of seeing people cooped up inside to slow the spread of the coronavirus, Jake Farrah decided it was time to give residents a new option for outdoor activity.

It also was an opportunity to add a dash of fun to what otherwise promised to be a long winter amid the COVID-19 pandemic.

It has been a huge hit, with Farrah once counting 170 people on the site, which the City Council agreed to lease to his nonprofit for a small fee with the understanding that the facility would be maintained by volunteers and open to the public.

“It’s stuff to get kids and families out of the house and someplace where they don’t have to worry about this COVID stuff,” said Farrah, a native of Texas.

Mayor Randy Knaack is a big proponent of the project, calling it “a fun new thing we put together in Menomonie” that provides an outdoor recreation option for residents right in the city. The facility, which is open seven days a week, officially launched on Christmas Day.

“Winter Wonderland is fun for everybody — young, old and in between,” said Knaack, who identified the site and promoted the addition of activities beyond skating. “It’s a great place to bring your family, your neighbors or your relatives and just come down and enjoy some community camaraderie outside and away from all your electronic devices.”

Knaack added that the site is small enough that families can keep an eye on their kids but large enough that it’s easy to maintain social distancing and follow health guidelines.

The name of the project was inspired by a holiday tradition Farrah started in honor of his mother, Elzy, after her death in 2013. For the past seven years, Farrah had raised money for Christmas Miracle to help local children in need. The nonprofit holds a holiday event annually for more than 200 children where they get to see Santa Claus and receive toys, warm clothing and a Christmas feast.

With such gatherings ill-advised during the pandemic, Farrah and his fiancee, Tanya Dugan, still delivered food and gifts to the homes of several children this year, but they wanted to do more than just play what Farrah called “ding-dong Santa.”

“We wanted to do something for the community,” Farrah said. “That’s when we came up with the idea of Christmas Miracle Winter Wonderland.”

Nate Cody, another Menomonie hockey parent, said the hockey rink has indeed filled a need in the community, as his son and daughter and other youth hockey players get only limited access to indoor ice time.

Cody said his kids, usually with both hockey skates and sleds in hand, have been going to Winter Wonderland at least once or twice a week since it opened.

“It’s great. The kids love it,” Cody said. “I usually have to drag them out of there when it’s time to go.”

“Me and my daughter and my nephew went there and had an absolute blast,” Horner said. “The sledding was the best part. The hills are amazing.”

Horner also appreciated the burn barrels, where parents warmed their hands while watching their kids squeal with delight.

“Just seeing the kids out there having fun, that’s what it’s all about,” Farrah said.

Farrah is thrilled the project has received such a positive reception from the community because he knows it took a lot of work by a number of people to make it a reality, including the mayor helping to clear debris, local electric companies running power to the site and city crews adding 65 truckloads of dirt to level out the area where the ice rinks are located.

“It took the whole community to get this thing off the ground,” Farrah said, noting that he and Dugan go to the site every day for various duties, but also rely on a team of volunteers to sanitize surfaces, serve hot chocolate, help with upkeep and resurface the ice nightly. The city provides water to the site.

Several local businesses also contributed money, materials and services to the project. The hockey goals and edging around the rink are made out of exhaust pipe, adding a rustic, down-home touch to the theme park-style area.

Donations are collected on site in a box made from a trailer fender and online to help keep Winter Wonderland wonderful.

When the snow and ice melt, Farrah and other volunteers hope to transform the property into an obstacle course in the summer, complete with a BMX bike trail and a climbing wall.

Farrah said he is thankful to city officials for giving Christmas Miracle access to the land and hopeful the partnership will continue so the recreation area will become a long-term amenity for Menomonie residents.

“As long as the city keeps leasing me the land,” he said, “I’ll keep it going.” 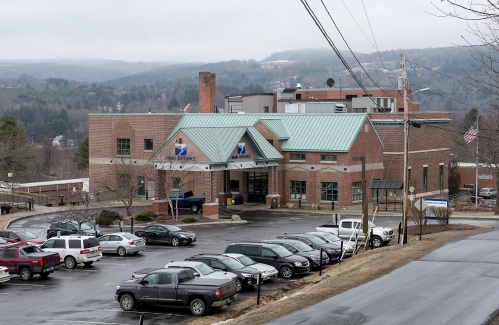