Brandy Guidry and her family chose not to evacuate their Gulf Coast hometown and instead rode out Hurricane Laura in their Louisiana ranch house surrounded by nearly a dozen apartments they rent out.

The Guidrys felt responsible for helping their tenants, but there was another reason to stay and weather the most powerful hurricane to strike the state in their lifetimes, she said Thursday: the pandemic.

“People are scared to go to high-populated areas because they have high levels of COVID,” there, said Guidry, 44.

Most of the Guidry family’s neighbors left their homes as authorities warned 580,000 Gulf Coast residents to evacuate before the hurricane. Evacuees sheltered as far as Alabama, Arkansas, Mississippi and Texas. As in California at the onset of recent wildfires, instead of opening massive shelters, many Gulf Coast officials issued vouchers for hotels in Austin and Dallas.

“Today is about saving lives, moving people out of their homes if their homes aren’t safe or habitable,” Louisiana Gov. John Bel Edwards said at an afternoon briefing.

The storm caused widespread destruction but only four deaths, none on the coast, Edwards said, normally a sign of a successful evacuation. President Trump said he would visit the Gulf Coast this weekend to tour the damage.

Officials in Louisiana and Texas who had tried to avoid traditional mass shelters because of COVID-19 were scrambling Thursday to find temporary housing for some of the 875,000 people still without power. And it wasn’t clear whether the evacuation would worsen the spread of COVID-19 in a region still struggling to recover. Edwards said he was concerned that the storm would limit coronavirus testing at a time when schools are reopening.

“The big concern would be the ability to maintain levels of social distancing during the evacuation,” said Dr. Peter Hotez, dean of Baylor College of Medicine’s National School of Tropical Medicine. “Remember this is a population that’s at risk to begin with because it’s a part of the country where there’s a very high rate of poverty so people don’t have deep resources to manage even in the best of times.”

While coronavirus-related hospitalizations and infections have decreased in Louisiana and some other southern states, Hotez said they were still high and at risk of rebounding as schools and businesses reopen and evacuees circulate. And it’s just the start of what’s expected to be an active hurricane season through November with up to a half dozen major hurricanes.

“There’s a bunch of things going on in this part of the country that could cause a resurgence of COVID-19,” Hotez said.

Charlene Lavergne, 64, didn’t want to leave her home in Sulphur, La., 10 miles outside Lake Charles. She had been quarantined there since the start of the pandemic, leaving only for medical appointments, as infections and deaths soared in Louisiana. She had sheltered at home during Hurricane Rita 15 years earlier. But urging from her five children and memories of that last deadly hurricane finally persuaded Lavergne to leave.

“I never wanted to see or hear that again,” she said Thursday from Plano, Texas, where she was sheltering at a motel with three daughters and two grandchildren.

“My family is scattered from San Angelo to Bay City to Dallas to Plano to West Houston to Atlanta right now,” she said. “My son and his family are trying to go home today and check our homes.”

Brandy Guidry works for Louisiana’s health department and was keenly aware of local COVID-19 risks. Her 14-year-old son hasn’t started high school yet. Her 21-year-old daughter had her hours working as a waitress reduced.

Louisiana has seen 4,874 of its 4.6 million residents die of COVID-19. Lake Charles and surrounding Calcasieu Parish, a working-class enclave of chemical plants with a population of about 205,000, has had 191 deaths, according to state health records.

“Calcasieu Parish, we’ve had a lot of COVID,” Guidry said as her family stood in their yard littered with fallen oak limbs Thursday.

Her husband, Chris Guidry, 51, said some local residents still refused to wear protective masks, even though they’re handed out at the doors of local Walmarts and lakefront casinos.

Now they were sheltering with neighbors and relatives. Others were returning home after evacuating, trying to make repairs and earn a living.

“Can’t make them quarantine — they’re already stuck,” said Guidry, who was hoping to get back to work in construction after the storm.

The Guidrys’ daughter’s boyfriend, Garrett Guske, 21, agreed that the coronavirus might spread as evacuees return.

“That’s just going to make COVID spike as people go back to work,” he said.

They worried about a fire that had erupted at a Lake Charles chemical plant and prompted the governor to issue a shelter-at-home order for the immediate area. Nearby, a riverboat casino that lodged under the I-10 bridge into town had temporarily closed the interstate.

They wondered aloud how they would get food. Most of the region was without power and expected to be for a couple of weeks. All of the local stores and restaurants were closed, many damaged. So were gas stations, which people relied on to run generators.

In the past, food and other supplies were distributed at shelters or emergency operation centers. But the Guidrys worried there would be long lines — a danger during the pandemic. They couldn’t order online from outside the region because their cable internet lines were down.

“We have a generator, but we can’t run that nonstop for two weeks,” Brandy Guidry said.

Across the street, neighbor Kevin Richard returned to check on his house after evacuating 75 miles east to Lafayette with his fiancee.

Richard, 59, a construction material business manager, said the couple sheltered at his brother’s house with half a dozen others, careful to stay in separate parts of the house (he and his fiancee stayed in an RV outside). They had intended to shelter at home, as he had during Hurricane Rita, but became alarmed by the forecast Wednesday as Hurricane Laura strengthened to a Category 4.

Two other neighbors, including one who had recovered from COVID-19 and another who was immunocompromised, also evacuated, he said.

His street was impassable, full of down trees, wood fences and power lines. Richard’s red brick house was relatively unscathed: Storm winds had stripped shingles, hurled parts of a magnolia tree through a window and tipped massive trees into the backyard. He wasn’t worried about COVID-19, although he expected young neighbors would return to roam the neighborhood without masks, cleaning and rebuilding.

“People walk around to help,” he said. “It’s going to take an effort.”

Neighbor Kevin Lavergne (no relation to Charlene Lavergne) evacuated even farther with his two pit bulls — to a hotel in San Antonio. He didn’t wear a mask and called the pandemic “overrated.”

Lavergne, 48, a fiberglass contractor, lost his job during the pandemic. His home wasn’t seriously damaged, but without power or a generator, he wasn’t sure he could live there.

His aunt Charlotte and uncle Glen Lavergne, who live a few doors down, stayed with their daughter up the road, but returned to find the storm had sheared off their roof. They were living in their RV, which had also been damaged by the storm.

Kevin Lavergne joined them and a couple of neighbors on their back patio Thursday afternoon, where a generator they were trying to fix hummed.

Fri Aug 28 , 2020
Hong Kong police are using the past words and deeds of government critics to bolster investigations under the city’s sweeping new security law, despite the legislation not being retroactive. The law, described by China as a “sword” hanging over the heads of its pro-democracy opponents, was imposed on the financial […] 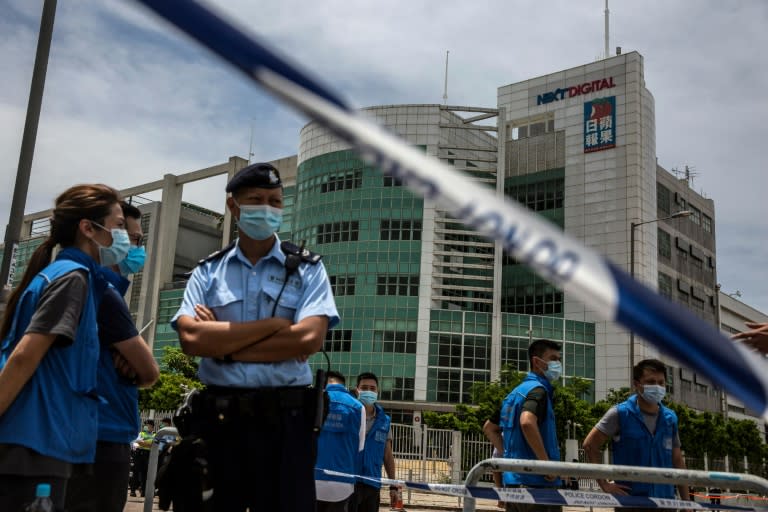