But after seeing images of voters across the country waiting in long lines to vote during this year’s primaries disrupted by the coronavirus, Taylor, 36, of Greensboro, North Carolina, has a new plan for November: working the polls.

“I just saw the videos and the pictures of the lines in Louisville and Milwaukee and in Atlanta and everywhere else,” he said. “Just hearing the stories about them not being able to have enough polling places, it made me upset to see those pictures, and so I finally said if there is something I can do about that, I want to be able to do that.”

Taylor, a college professor, is one of hundreds of thousands of Americans planning to volunteer as poll workers for the first time in hopes of mitigating a massive nationwide shortage.

While many states are expanding mail voting capacity to try to keep voters from congregating at the polls, in-person elections are still being planned, and poll workers are in even higher demand than usual.

In 2016, U.S. states and territories deployed around 1 million poll workers across more than 116,000 polling places nationwide. Recruiting these workers was already an issue — nearly half of jurisdictions told the U.S. Election Assistance Commission it was difficult or very difficult to recruit workers for the 2016 election, according a report the commission gave Congress.

The pandemic is likely to compound the issue, because 56 percent of those poll workers were over 60, an age group at higher risk for severe illness or death due to the coronavirus. Election officials and experts are warning of a serious shortage. When election officials don’t have enough volunteers, polling sites shutter and lines get longer — disenfranchising voters who cannot travel farther or wait longer to vote.

“Since I’m still sort of young — at least in a less vulnerable group — I thought this is a way I can get out there and actually help, instead of feeling helpless,” Taylor said, adding that he’s been encouraging friends and co-workers to volunteer, as well.

Now, corporations, trade groups, political organizations and even students are rallying — and sometimes paying — younger Americans to step up and volunteer at the polls.

A group of organizations, including the Civic Alliance, a nonpartisan group of businesses, and the Fair Elections Center, a nonpartisan voting rights organization, teamed up with major corporations, including ViacomCBS, Patagonia and Uber, to form Power the Polls, an initiative that set out to recruit 250,000 poll workers to staff in-person voting and is encouraging employers to pay employees who volunteer. According to the group, the goal was surpassed this month, and it is now working on recruiting 100,000 more by Election Day.

“There’s definitely going to be some vibe change, and Power the Polls is going to be part of that,” said Scott Duncombe, co-director of Power the Polls, pointing to the new recruits, many of whom are expected to be younger than the average poll worker. “This could be an opportunity for polling places to feel like a place that really belongs to us and everybody.”

Power the Polls has some big-time political and star power behind it, with social media shoutouts from a long list of recognizable names, including former President Barack Obama, musician Billie Eilish and actors Charlize Theron, Joseph Gordon-Levitt and Kerry Washington.

Promoting the cause on “The Daily Show” in July, host Trevor Noah said: “This is your chance to save Granny, protect your democracy and get paid.”

Poll workers are indeed paid by election officials — from stipends of less than $100 to hundreds of dollars — and this year, some companies are even offering to up the ante by keeping workers on payroll during their day of service.

Meanwhile, to raise awareness of the critical shortage of poll workers election officials have said they are facing during the pandemic, the Election Assistance Commission designated Sept. 1 as National Poll Worker Recruitment Day, prompting an outpouring of public service announcements online and commitments from businesses to offer incentives for volunteering.

Old Navy announced that it would pay any of its 50,000 employees to serve as poll workers, offering eight hours of pay on top of what they’ll make from their local jurisdiction. Companies including Tory Burch have offered paid time off to anyone volunteering as a poll worker.

More Than a Vote, a group of artists and athletes led by NBA star LeBron James that aims to fight voter suppression, has teamed up with the NAACP Legal Defense and Educational Fund for a multimillion-dollar push to recruit poll workers, too.

“Our grandparents, parents, aunties and uncles are being asked to risk their lives to open a polling location? No way,” the group wrote in an open letter last month, urging supporters to volunteer in the most vulnerable communities.

In an interview with NBC News’ “TODAY” show, pro basketball player Renee Montgomery, a More Than a Vote member, argued that the shortage of poll workers would create voter suppression.

“I want people to understand that you don’t need this big grand thing to make a change,” she said last week. “You can literally be a poll worker and create a lot of change.”

These efforts aren’t isolated: A group of high school and college students created the Poll Hero Project, a nationwide group that aims to recruit young people to work the polls, while officials in Nebraska and Ohio are offering continuing education credits for accountants and attorneys who volunteer as poll workers, too.

Kwame Whyte, 44, of Ashburn, Virginia, said signing up to be a poll worker gave her hope during a challenging year.

“It’s hard figuring out what you can do to stay engaged as a citizen, especially when, you know, people are unemployed and there seems to be a lot of unrest and turmoil in the country. You start to feel hopeless watching the news all the time,” Whyte said in an interview. “But that for some reason, once I filled out the application, I hit send, and I, I just felt more hopeful and optimistic. So I’m excited about it.”

Polk County, Florida Bus Drivers Say Schools Are Keeping Them in the Dark on COVID-19

Mon Sep 14 , 2020
Photo by Paul Hennessy/NurPhoto via Getty Images MIAMI—Less than three weeks after schools reopened in central Florida’s Polk County, Mark couldn’t help but notice some students riding his bus slack off when it came to coronavirus safety precautions. “The first week was fine,” said Mark, who like other bus drivers […] 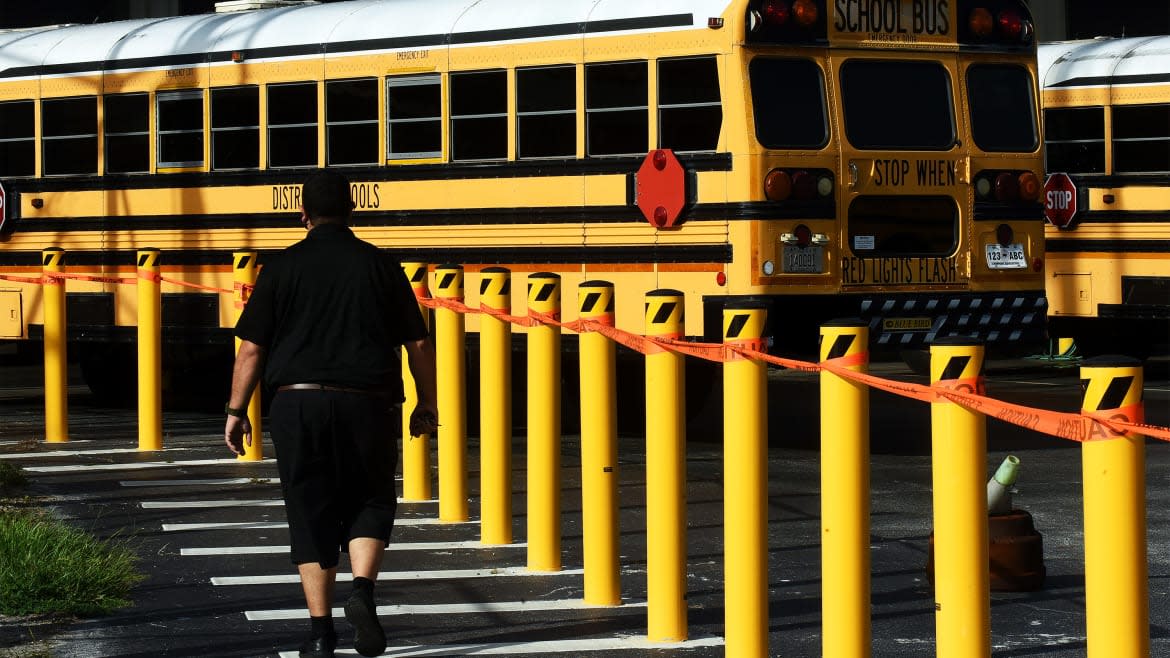