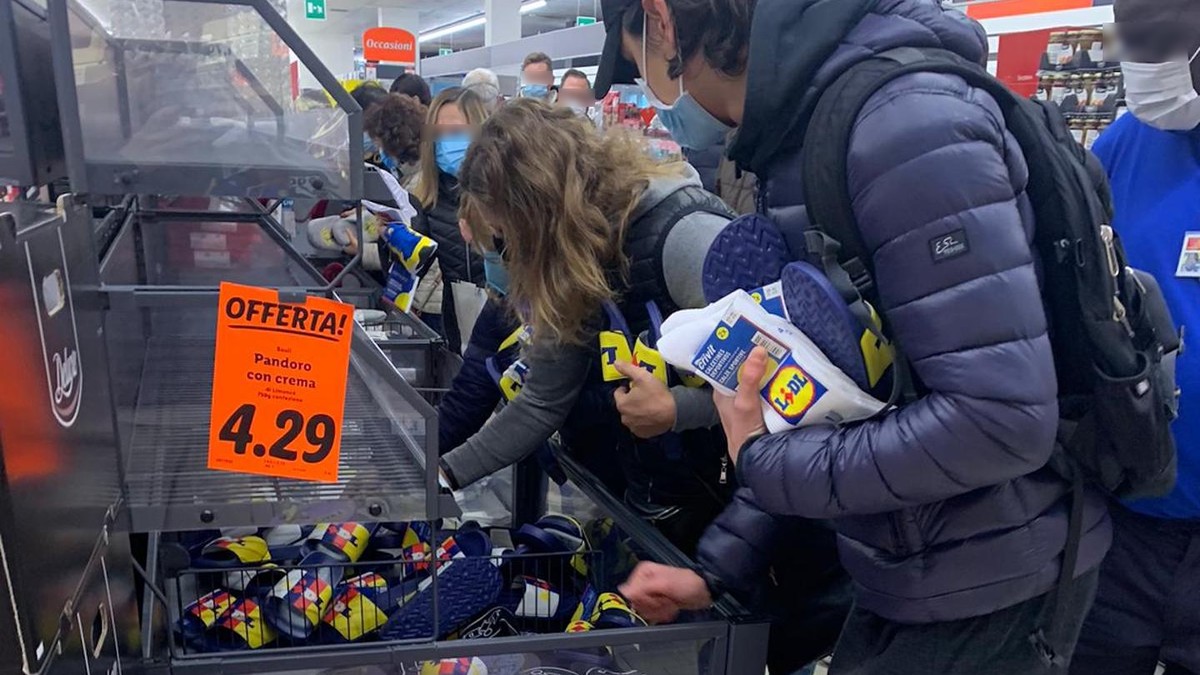 All photos courtesy of the author.

In early November, Lidl launched a limited edition, streetwear-inspired clothing line that unleashed carnage in the company’s Italian supermarkets. Some people queued to stock up on as many items as possible, while others made memes and wrote articles questioning the feverish interest in discount sliders.

The Lidl Fan Collection was launched in other European countries earlier this year, including the UK, Belgium, Germany, Finland and the Netherlands, and was all the rage abroad, too. For €12.99, you could get yourself a pair of Lidl’s trainers in its brand colours (yellow, red and blue). For €4.99 you got the women’s sliders in the same colour-way, or a men’s version in black and white. Thick socks featuring Lidl’s logo went for €2.99, T-shirts for €4.99.

The super-hyped products were then resold, often at a much higher price. We asked a few customers who jumped on the bandwagon how it went for them.

Giacomo, 23, from Faenza (near Bologna)

VICE: Why did you want to buy these items?
Giacomo: I first noticed them this summer, when they came out abroad. I was crazy about the flip-flops and I was told in advance they’d be coming to Italy, too. In my local supermarket, they let people buy only two of each per person, so I took a couple of friends with me and went in twice. In total, I bought five pairs of shoes, six pairs of socks, six pairs of flip-flops and three T-shirts.

Did you put all of it on sale?
Only the items I decided not to keep. I listed them on Depop and eBay, because they’re used by a wide range of people. I’ve sold almost everything. The shoes sold for €50, the socks for €10 and the slippers for €25.

Have you done this before?
I’ve been part of a few different [reselling] communities for about five years, and I buy and resell when I want. When I sell shoes, it’s because I don’t want them anymore, or to buy something else.

Do you like these shoes?
I don’t like the shoes at all – the colours are too gaudy. I think they generally wouldn’t appeal to people my age. It’s clearly a take on Nike’s iconic Huarache model… but I was crazy about the socks and the flip-flops.

Queues outside a Lidl supermarket on the day of the launch.

VICE: Why did you buy these items?
Stefano: We love a bargain in my family, and Lidl is one of our favourite supermarkets. Every night, my dad comes home with something he bought just because it was on offer. Plus, Lidl was the first supermarket [in Italy] to launch a clothing brand. That’s why I decided to invest in it.

My dad and I went to two different Lidls and came back with €300 worth of things. We’ll keep what we want and resell the rest.

How are you reselling them?
I put a few on Facebook Marketplace. After two days I had 2,500 views and messages from 600 to 700 people. I also used Subito.it [an Italian online marketplace] and posted on social media, where I have a lot of followers. A lot of people on TikTok reacted negatively to my video about the Lidl collection, but I thought they were overreacting.

Have you managed to sell anything yet?
I’m negotiating with lots of people at the moment. I sold four pairs of socks for €40 [each] right away. Now, I have people asking me to sell in combos.

Who are the buyers?
When I went to Lidl, I didn’t expect to see so many people. Most of them were older. A 60-year-old man even threatened to kill me just because I bought five pairs of shoes.

A lot of the people who messaged me are young, but I’ve mostly sold to parents looking for items for their children. Other people ask me how to resell the items, and some are getting them as Christmas presents. At the end of the day, they’re a nice gift and they’ll make you laugh.

Do you like these shoes?
I define them as “cringe”, but I think that’s what makes them so sought after. I hope they make more clothes, maybe hoodies and trousers.

VICE: What made you buy these Lidl clothes?
Alessandro: I already knew they’d been very successful abroad. I live in a red zone [an area under total lockdown] and I was really looking forward to my weekly shopping so I could get hold of a few pairs [of shoes].

Which sites have you used to list them?
I have two listings, one on Depop – which I generally use to sell shoes – and one on Facebook.

I bought four pairs of shoes, three pairs of flip-flops in different colours and two pairs of socks, which I want to keep as a souvenir of this “adventure”. I sold pretty much everything, mostly to people over 30. Many of them were hoping to resell them at a higher price after buying them from me.

How much did you make?
I sold the shoes for about €50 and the flip-flops for about €40. There have definitely been negative reactions on social media. I’m still baffled by the rudeness of people who don’t understand reselling and send hateful messages. It’s OK to think that it’s crazy to buy products at resale prices, but no need to threaten and insult.