Who Is ‘RHOD’s Tiffany Moon? Why a Doctor Joined ‘Real Housewives’ and What She Brings to Season 5 (Exclusive)

It’s not every day an MD becomes an RH — a Real Housewife — but Tiffany Moon… er, make that Dr. Tiffany Moon’s day has come. The 36-year-old anesthesiologist joins the cast of The Real Housewives of Dallas for season 5, an adventure that was even unexpected for the doctor herself.

“I took a leap of faith and I’m here for it,” Tiffany tells ET over video chat, from inside her boutique-like closet at her Dallas home. “This is something out of my comfort zone. It was an opportunity that was offered to me that I really wanted to take advantage of, because I think that young girls need to see more doctors on reality TV because we are real women. You will see me struggle with balancing working as a physician and having young children at home. I think people need to see more of that on TV instead of things that are, you know, make-believe and not at all like most people’s normal lives.”

Tiffany is mom to 6-year-old twins, Chloe and Madison, whom she shares with her husband, Daniel, the son of prominent Dallas entrepreneur Sam Moon. She says she got her family’s full sign-off before signing onto the show, though she didn’t know how much of a challenge she was in for. Tiffany juggled a demanding full-time job, the demands of motherhood and a demanding filming schedule of Housewives, all amid the coronavirus pandemic — definitely not the norm for a rookie season.

“I felt like [I was at a breaking point] many times,” Tiffany admits. “There will be a few tears. You know, it’s hard enough being a physician mom, and then you throw in the pandemic — which of course none of us saw that coming — and there were a few days that I just thought, like, I can’t go on anymore. I don’t have enough battery left in me to do this, and I talk about the struggles on the show.”

She did make it through, though, and judging by the trailer, Tiffany delivers a pretty standout first season. Even she was surprised by how much of the season 5 first look focused on her — “I was like, oh…. OK!” — but she stands by everything she brought to the show, sometimes even shocking herself.

“I am not a vulnerable person,” Tiffany confesses. “I always tell people that I’m doing fine. I could be having the worst day and you’ll be like, ‘Hey girl. How are you?’ And I’ll be like, ‘Oh, I’m fine.’ Like, I just… I don’t really open up, and when I decided to do this I said, I’m going to do it. I’m going to do it all the way. … I’m gonna let the gates open, they’re gonna open — and they did, and here came the rush of water just flooding in.”

“I even surprise myself with my vulnerability,” she adds. “I was like, oh my god, I can’t believe I just said that. Like, I’ve never told anybody that. Probably my two closest friends know that and now, like, I don’t know? [Millions of] people are going to know it.”

One of those vulnerable moments will be Tiffany confiding in her husband that she wants to provide a better childhood than she had for their daughters. Tiffany immigrated to the United States from China at six years old, to less-than-ideal circumstances.

“I had nothing when I moved to America,” she admits. “I lived in a one-bedroom apartment in a not great area of town and I didn’t even have a bed. I slept on a twin mattress on the floor, like it was just a mattress with a blanket. My parents barely knew English. They were trying to make things work, and brought me to America to give me a better life versus my children who live in this 12,000 square-foot house.”

“I mean, it’s not just material things,” she continues. “I want my children to grow up feeling like Mommy loves them no matter, which I will tell you, unfortunately, that’s not the way I felt when I was a child. I always felt that the love my parents had for me was predicated on my performance largely as a student at school and I just want to let my children know that, no matter what — I mean, as long as they’re good people — that I love them.”

Tiffany is arguably the embodiment of the “American dream,” graduating with her undergraduate degree from Cornell University at just 19. Four years later, she completed medical school. It’s a story she’s very excited to share with viewers, because it’s one she would have liked to have seen herself.

“I will tell you when I moved to the United States in the early ’90s and I got to watch TV as a treat, there was no one that looked like me,” she recalls. “I thought that I was… not ugly, but just not special, or that anyone who looked like me could never be on TV and I just think it’s so important for little girls to have role models that they can look up to that looked like that. I mean, I think that representation really does matter.”

Tiffany comes to RHOD by way of D’Andra Simmons and her mother, “Momma” Dee Simmons, who both helped Tiffany acclimate to the group. Tiffany made “cameo” appearances on prior seasons, a guest at some of D’Andra’s events, but that was the extent of her Housewives experience before officially joining the show. She was not a fan of the franchise (she claims she doesn’t watch much TV), so she entered the group with no expectations on what to expect, or what to deliver.

That fighting comes courtesy of Kary Brittingham. The season 4 newbie seemingly did not bring the welcome wagon around for the season 5 new girl.

“What would you mean by ‘not welcoming?’ Pushing someone into a swimming pool?” Tiffany asks, referencing a quick moment from the trailer in which Kary shoves the RHOD freshman into the deep end, literally. The trailer hints at clash after clash for the pair, with Kary calling Tiffany “two-faced” and complaining about her bossy behavior.

“‘Bossy’ is a loaded word, because we never call men bossy,” Tiffany fires back. “When my supervisor, or when one of the male anesthesiologists or surgeons, does something or takes control of the room, we never call him bossy. We only call women bossy, and it almost has a negative connotation to it, like you were telling people what to do. Yeah, I mean, if that’s the definition of bossy, then I am bossy. Because sometimes I’ll tell people what to do. I’ll tell people what to do at work, in order to save patients’ lives. I’ll tell people how to act when they’re in my home, at a party that I’m serving them, and I’ll tell my husband and kids what to do sometimes. So if she wants to call me bossy, that’s just fine with me.”

With that said, Tiffany does admit that season 5 is less about “big drama” or fights, and more about personal stories and connection.

“It’s like, when all the noise dies down and there’s no more parties and no more charity galas and you have to sit with yourself and you have a quiet moment of reflection, that’s when you actually can do your self-work,” she teases.

RHOD OG Brandi Redmond entered season 5 in the middle of some self-work, as she lived with the aftermath of an offensive video she uploaded to Instagram in the early days of the show. The years-old clip, in which Brandi does a racist impression of Asian people, resurfaced between seasons 4 and 5, after Brandi held now-former co-star LeeAnne Locken’s feet to the fire over racial comments LeeAnne made about Kary’s Mexican heritage on the show. The discourse online surrounding the video sent Brandi’s world into a tailspin. She entered mental health treatment ahead of filming season 5, as she battled suicidal thoughts over the incident.

The premiere episode sees Brandi sharing that story, as well as an emotional conversation between the former Dallas Cowboys cheerleader and Tiffany about the video and why it was so offensive.

“I have no idea where [the video] came from, [and] my being on the show has nothing to do with that video,” Tiffany notes. “I do address it because I think it’s important to make it sort of a teachable moment for her. But I think she knows that what she did was wrong and she has, I guess, repented and gone through a very personal journey, which we’ll see unfold during the season.”

“I am just hoping that people see us, like, see the true us,” Tiffany adds of what she wants viewers to take away from this very different season. “See that we all have different backgrounds, different histories, different values, different stories, and that they see us as people who may be able to inspire them.”

“And I hope that we can make people laugh,” she says, “because it has been a tough year. I cried more tears in 2020, I swear, than the past five years combined. So, I want to laugh and I want to make other people laugh. So, if you watch the show and you chuckle and giggle and, you know, get some good one-liners, then my job is done.”

The Real Housewives of Dallas airs Tuesdays at 9 p.m. ET/PT on Bravo.

Free soccer this Spring in Colorado Springs for 600 children

Wed Jan 6 , 2021
COLORADO SPRINGS — 600 children from pre-kindergarten through second grade across Colorado Springs are able to play soccer this Spring for free, thanks to a grant from Comcast NBCUniversal and supporting funds from Children’s Hospital Colorado. The first 300 local children to register in each of the designated age group […] 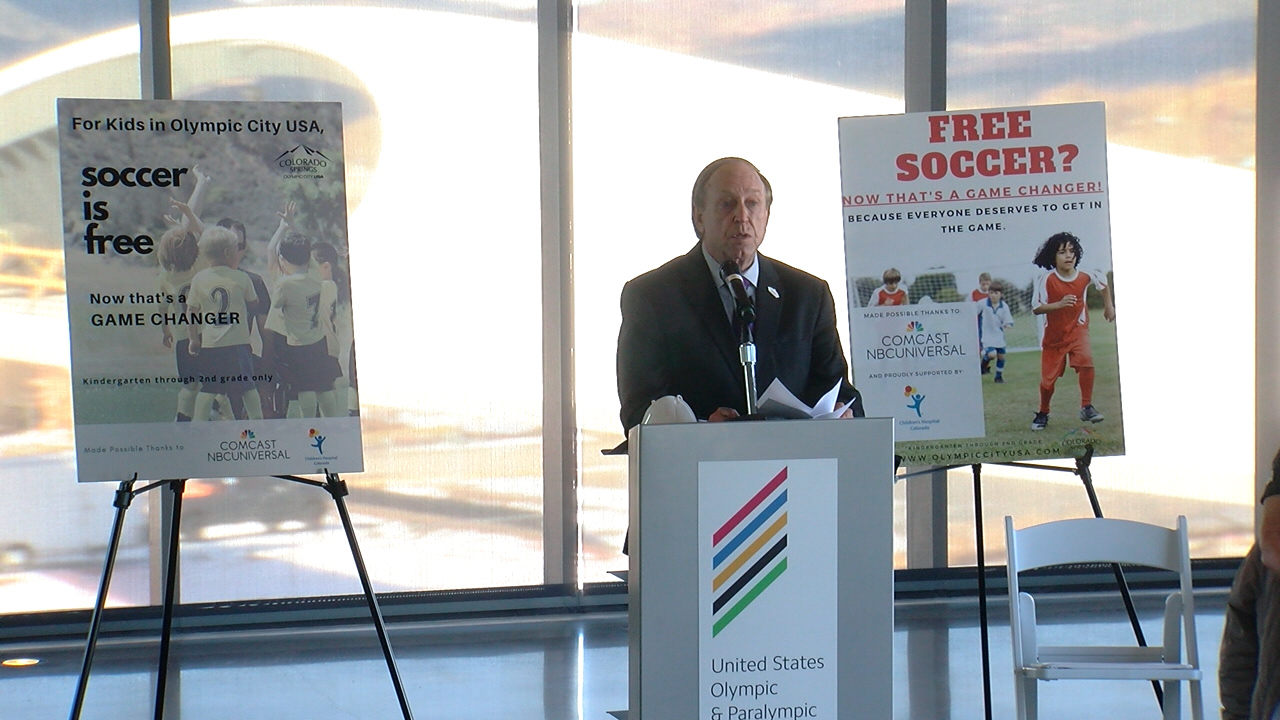