Two new studies suggest that a Covid-19 variant first discovered in California has been spreading rapidly through the state.

The findings come as the US ramps up its efforts to track and catalogue various forms of the mutating virus, and raise fresh questions about the circulation of the coronavirus in the country.

Here’s what we know so far:

What is the California variant?

The variant, which is called B.1.427/B.1.429, first caught the attention of scientists in November 2020 and belongs to a lineage – a branch of the coronavirus family tree carrying similar mutations – that is thought to have emerged in May.

The variant has been detected in 19 countries, and all across the US, though limited surveillance has found it concentrated in California.

The variant has three mutations that alter the shape of a protein, called spike, on the surface of the coronavirus. Other variants, including the ones first discovered in the UK, South Africa, and Brazil, also have mutations on their spike proteins. Researchers are concerned that these changes could make it harder for the immune system to quickly recognize and block the virus.

Why are we talking about it now?

Scientists around the world have been tracking Covid-19 variants by scanning samples taken from people infected with the virus. The US has been lagging behind other countries in doing this kind of monitoring – and still is. But some labs, including at the University of California, San Francisco (UCSF), have recently redoubled efforts to figure out which variants are most common in the state.

While looking through samples from positive coronavirus tests to see if B.1.1.7 – the variant first detected in the UK – was circulating in the state, the USCF researchers realized that a different, homegrown variant actually accounted for a growing proportion of infections. Another team in Los Angeles found that that variant was spreading there as well.

What does the research show so far?

There have been two studies this week, both from teams at UCSF. Neither has been peer-reviewed or published in a scientific journal. Researchers said that pre-prints of their work would be posted online in the coming days.

The first one found that in late November, the B.1.427/B.1.429 variant accounted for 16% of the samples sequenced in San Francisco’s Mission district, a low-income, Latino community in a city where many residents are also essential workers. By January, the variant accounted for 53% of cases sampled.

The researchers found that, after tracking 326 households, people in the same household as someone with the B.1.427/B.1.429 variant had a 35% chance of getting infected. People living with someone infected with any other variant had a 26% chance of catching the virus.

“I would call that a very modest increase,” said Joe DeRisi, the co-president of the Chan Zuckerberg Biohub, who has been investigating the variant’s spread in San Francisco, about the rates of transmission the study found.

DeRisi’s team also found that the B.1.427/B.1.429 variant was not correlated with more severe infections, or a higher “viral load” – the amount of virus that builds up in the body.

The study’s findings are limited – just 630 samples were sequenced in January, and 191 in November, all collected from one neighborhood.

The second study was more pessimistic. It sequenced 2,172 samples from 44 California counties, and found that the B.1.427/B.1.429 variant accounted for 0% of cases back in September, and accounted for about 50% of cases by the end of January.

Charles Chiu, the infectious diseases researcher and physician at UCSF who led the research, warned that the findings were a warning. “The devil is already here,” he told the Los Angeles Times, and he and his team suggested that the Centers for Disease Control and Prevention (CDC) should recognize B.1.427/B.1.429 as a “variant of concern” – as the variants first discovered in the UK and South Africa have been labelled.

But that study, too, comes with caveats. The statistics suggesting that patients carrying B.1.427/B.1.429 variants were more likely to die was based on the charts of 69 patients who were admitted to the hospital in the first place because they had very severe Covid-19.

“If you only look at the sickest people you’re gonna see something different than if you look at the population as a whole,” said DeRisi, who was not involved in his colleagues’ study.

Chiu did not respond to multiple requests from the Guardian for comment.

How worried should we be about this variant?

Neither study tells us exactly why transmission rates are higher. The virus could be becoming more common by some fluke, or because it is slightly more transmissible.

“I don’t think there’s any question that this lineage is becoming more common in California,” said William Hanage, an epidemiologist at the Harvard TH Chan School of Public Health. “But I think the amount of sampling in California is not sufficient to fully define why. And I think that we should be wary, before we categorize every locally emerging hopeful monster as a ‘variant of concern’.”

He noted that although the California variant has now become more common in the state, researchers think it has most likely been around since at least May. “You’ve got to ask yourself why it’s been around for so long and hasn’t taken the world by storm,” he said.

“I am not panicked, and you shouldn’t be either,” said Monica Gandhi, an infectious disease expert at UCSF.

“It’s not unexpected that we’re seeing more variants,” she continued. “Viruses mutate, and often, these mutations will allow them to become more transmissible.” That’s the modus operandi of a pandemic-causing virus. And it’s scientists’ job to keep track of them, and test whether new variants can better evade our immune systems and vaccines.

But for now, Gandhi said she’s not particularly worried about B.1.427/B.1.429, or the variant that researchers this week flagged in New York. In both states daily deaths and hospitalizations are going down despite these new variants being in circulation, she noted. “So far, none of these variants have evolved to the point where they can completely get through masks, or they can overcome social distancing, or any of the other public health measures we’ve implemented.”

“These emerging variants tell us we need to be vigilant, that maybe we shouldn’t be making summer vacation plans today,” said Waleed Javaid, an epidemiologist and the director of infection prevention and control at Mount Sinai hospital in New York. “But let’s wait and see before we worry too much.”

Will the vaccine protect people against these various variants?

Researchers have found that vaccines may be slightly less effective against the variants first found in South Africa because mutations on the surface spike proteins make that variant less recognizable to the some antibodies the immune system produces to find the intruding virus. Drug developers are now working to adapt vaccines to make them even more effective against these new, emerging variants.

But all evidence indicates that the ones currently approved in the US have been, and will continue to protect people against the California variant.

“Experiments need to be done to test the effectiveness of the antibody response elicited by the vaccines against the B.1.427/B.1.429 variants,” said Christopher Barnes, a biochemist at Caltech who has been studying how vaccines respond to variants. But, he added, “reduced responses are still effective because of the powerful immune response produced by the vaccines”.

That’s because the Covid-19 vaccines push the immune system to develop a range of defenses against the virus. Vaccines trigger the body to create antibodies that attack the virus, but they also alert helper t-cells, which can raise alarm about the invading infection and galvanize other cells to help fight it, and killer t-cells – which seek out and destroy the virus. In addition, special cells called memory b-cells and memory t-cells retain information about the invading virus for months or years.

Thu Mar 4 , 2021
As part of Insider’s wedding series, “The One,” Bijon Vaughn shared how she found her dream dress. The bride wore a Galia Lahav gown for her destination wedding in Mexico. The $7,500 gown featured an intricate bodice, detachable sleeves, and sheer cutouts. Visit Insider’s homepage for more stories. Bijon and […] 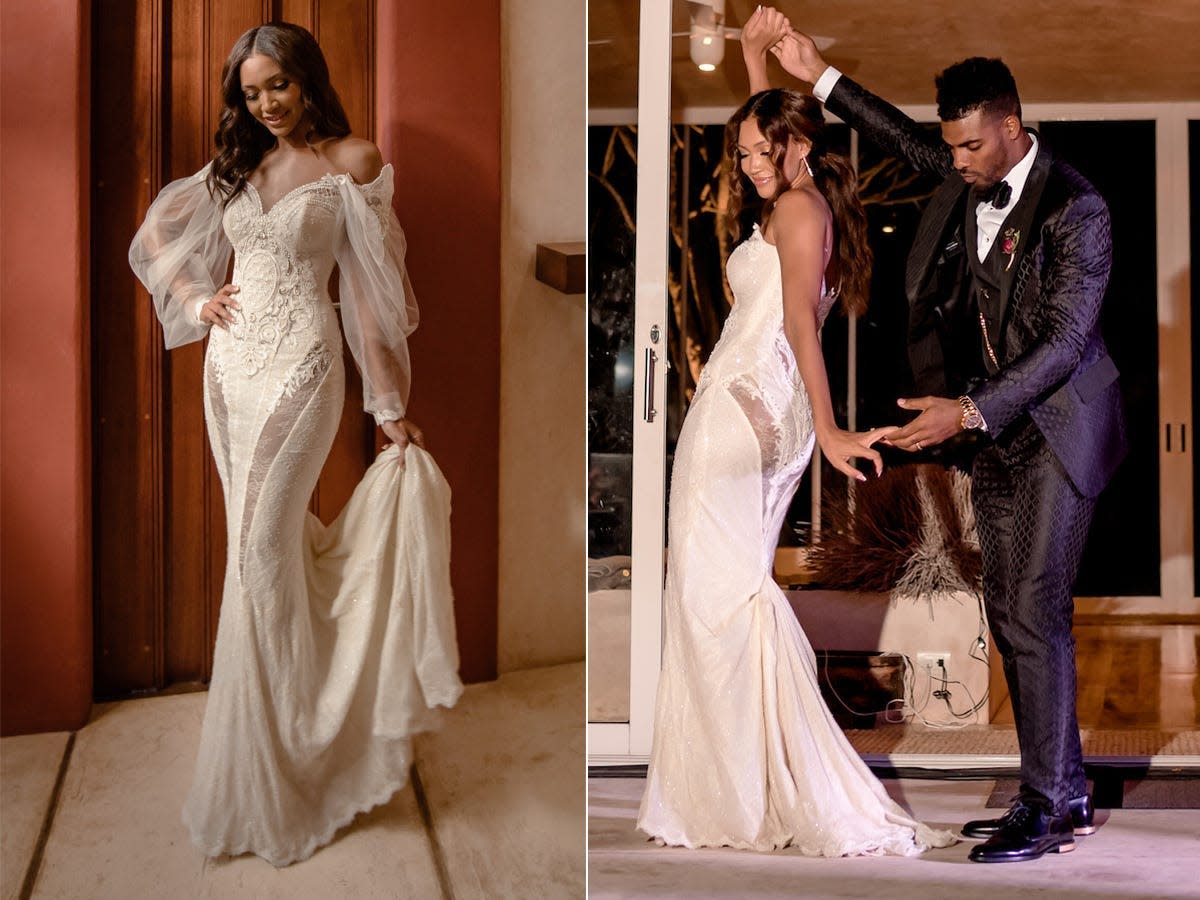