Through the Chinese everything app, the 24-year-old shops for clothing and sends photos and audio messages to her grandma and uncle in Guangzhou. It’s how she schedules appointments with her hairstylist and where she found her bao supplier — a local woman who sells the steamed buns out of her car.

For millions of people around the globe, and in swaths of the United States with concentrated Chinese populations — including Southern California communities in the San Gabriel Valley and Irvine, where Wang lives — WeChat is a way of life.

“We always use WeChat because everyone else uses it,” Wang said. “It’s like Facebook messenger but ten times better, ten times more sophisticated.”

But with the Trump administration targeting the app, she worries that soon she and her parents will be cut off from their cultural community in the U.S. and lose the last line of communication they have with the rest of their family thousands of miles away.

While the dictate was vague and its impact remains unclear, experts say the order could cause the WeChat app to be pulled from Apple and Google online stores when it goes into effect in fewer than 45 days. Without the ability to download updates, users of the app would become more vulnerable to security breaches and miss out on tweaks that keep it functioning smoothly, decreasing the app’s utility over time.

In his rhetoric, Trump has kept the focus on TikTok, haranguing and threatening the company for months, but WeChat users may feel the effects of his actions more acutely. That’s because TikTok has an out: Microsoft has publicly acknowledged it is in talks with the app’s Chinese parent company, ByteDance, to take control of operations in the U.S., Canada, New Zealand and Australia. If the sale goes through, consumers aren’t likely to face the disappearance of the app anytime soon.

No such fallback plan exists for WeChat, often described as the Swiss army knife of apps — a messaging service, payments platform and social network all in one. With China’s patchwork of internet firewalls, filters and censors locking out most outside technology, WeChat is one of the few bridges left between China and the rest of the digital world.

News of the federal government’s WeChat crackdown sent Southland communities and Chinese enclaves nationwide into a panic, with people scanning news, posting angry and fearful rebukes of the move online and messaging friends and relatives to parse what the decision could mean for them, their families and their businesses.

A White House petition “WeChat Should Not Be Banned” blew up on local WeChat feeds Friday. Started July 14, after White House trade advisor Peter Navarro threatened to take action against WeChat, the petition has accumulated more than 60,000 signatures.

Several WeChat users in Southern California said their friends had begun to sign up for accounts on Line, a Korean-owned messaging app popular in Japan, and Facebook-owned WhatsApp, in the hours after the ban was announced, desperately searching for WeChat alternatives — although both of these apps are blocked in China.

“There’s definitely a lot of fear. This is an essential platform for Chinese immigrants in the United States,” said Sunny Shao, a researcher at AAPI Data and Ph.D candidate at UC Riverside studying political participation on WeChat.

WeChat, known as Weixin in China, began as a project in parent company Tencent’s research center in Guangzhou in 2010, and gained traction as a mobile messaging service after its launch in early 2011.

But WeChat wanted to be more than a social network. Ahead of the Lunar New Year in 2014, WeChat developed its “red packet” tool— a digital way to send small amounts of money to other users, emulating “hongbao,” the red envelopes gifted during holidays and celebrations. The tool was an overnight sensation, according to the South China Morning Post.

Combining the functionality of Facebook, Whatsapp, Venmo and more, WeChat is woven into almost every aspect of life in China. People use it for hailing taxis, paying for food and buying plane tickets. Since February, a nationwide health-clearance system embedded within the app has been used to regulate travel and enforce quarantine.

It’s China’s most popular mobile app, with over 1.2 billion monthly users worldwide. In the U.S., the platform has 19 million daily active users, according to data firm Apptopia.

In the San Gabriel Valley, where at least nine cities have majority Asian populations, and Asian Americans and Latinos make up 74% of the population, some local authorities have used WeChat for official outreach to constituents.

Alhambra Police Department in 2015 became the first in the country to adopt WeChat, using the app to inform residents about law enforcement activities. The city of San Gabriel has a part-time worker who translates its regular communications into Chinese and posts them on the city’s WeChat and Weibo (another Chinese social network) accounts, according to city councilman Jason Pu, who has lobbied the city to increase engagement to the Chinese-speaking population since he was first elected in 2013. Arcadia, too, has an official WeChat account.

It’s hard to overstate how much of life for California’s Chinese diaspora unfolds on WeChat. Local eateries and grocery stores like 99 Ranch Market use it as a payment method to cater to tourists and students with Chinese bank accounts. People shop, read news and organize donation drives and political actions there. Restaurants can integrate their menus directly into the interface. Real estate agents list properties on the platform. There are whole publications that exist exclusively on WeChat.

Across California, WeChat has helped spark political participation among Asian immigrant populations. Community organizers used it to drive protests against affirmative action initiatives such as Senate Constitutional Amendment 5 (later shelved) and Proposition 16, which would erase the state’s ban on affirmative action from the California Constitution should voters approve it this fall.

Beyond tamping down civic engagement, the WeChat crackdown could have vast implications for both regional and cross-border commerce. WeChat supports Southern California’s underground cottage industry of home-cooked Chinese cuisine — marinated duck wings, stewed pork knuckles and those baos Wang buys from her neighborhood vendor, for example.

Amy Duan, who built a following for her Chinese-language food website Chihuo on WeChat, said the ban is cruel to the Chinese community.

Chihuo — which publishes dining recommendations and other content about the food scene in some 15 metropolitan areas — has more than 1 million subscribers on WeChat. Duan said the company largely neglected other social media platforms until earlier this year, when Chihuo was featured on Padma Lakshmi’s Hulu show “Taste the Nation,” and Chihuo gained a broader following. Still, the company is reliant on the platform.

“If WeChat is really banned, we might have to find some new business models and we will have a lot of struggles,” Duan said. “We will prepare for the worst and hope for the best.”

More than her own business however, Duan worries about struggling San Gabriel Valley restaurants Chihuo has built partnerships with. Since the start of the pandemic, more restaurant owners have created WeChat groups and communities, posting their hours and delivery schedules. Duan makes it a point to order via WeChat rather than delivery apps such as Doordash and Postmates, which charge restaurants fees.

For those conducting business between the U.S. and China, WeChat is an essential communication tool with no ready substitutes, said Geoffrey Gertz, a fellow with the Global Economy and Development program at the Brookings Institution. “Almost everybody in China is on this one app. Everyone trying to find a new workaround is really going to be a hassle and a pain,” Gertz said.

Along with small businesses, Gertz said some of the biggest American companies could suffer as well. Those include Apple, which manufactures its products in China and last year made $44 billion there. If Apple can’t sell phones able to operate WeChat, or if the Chinese government targets it in retaliation, its business could be devastated, he said.

Tony Chen, who owns freight forwarding company TSJ Logistics, based in Cerritos, Calif., has an agency network that stretches through China, as far north as Dalian and south to Shenzhen. Virtually all of the company’s communications happen through WeChat.

During the day Chen uses the app to order dumplings and bento boxes and to chat with friends. At dusk, Chinese truck drivers and warehouse managers message Chen with updates on pickup times and routes. Money is collected, and drivers are paid through WeChat. “I’m constantly on the app,” he said.

Although the ban will be a huge nuisance for his business, Chen said he believes it should have happened long ago.

There is a common understanding that talking about sensitive topics like Hong Kong or Taiwanese democracy movements over WeChat is a no-no, Chen said. His family is Taiwanese, and for security reasons usually uses the Korean-owned Line to communicate.

While security concerns about TikTok are largely speculative, surveillance of WeChat conversations and propaganda-pushing by the Chinese government has been documented by cyber researchers at the Citizen Lab in Toronto and open-source data security collective GDI Foundation, who say messages are blocked and stored in a database connected to public security agencies in China.

Still, others say the app is too important a bridge to China to do away with completely.

San Francisco marketing agency owner Charlie Gu spent Friday morning fielding calls from panicked clients asking what the Trump administration’s targeting of WeChat would mean for them. His firm helps American brands sell themselves to Chinese consumers. A big part of his work is helping businesses, such as the Beverly Center on La Cienega Boulevard, develop a presence on WeChat.

Gu tells his clients he has only as much information as they do. “It’s new and fresh and we’re waking up to it — trying to understand what it means,” Gu said. “The lack of clarity is creating uncertainty for a lot of business.”

It also threatens to disrupt his bond with those closest to him. Gu, his husband, his parents and extended family are all in the same WeChat group, where they share stories and plan trips. Gu’s husband doesn’t speak Chinese. But WeChat has built-in text translation tools that make it easy for him to communicate with his in-laws over the app.

On Friday, Gu bought a year-long subscription to a virtual private network service of the type internet users in China use to access blocked websites, as a precautionary measure.

“It does feel sad that we live in this world where this decoupling is happening. It’s really sad for me,” he said. “We’re kind of caught in the middle of this escalation.”

8 unmissable things to do in sunkissed Santa Barbara

Wed Aug 12 , 2020
Santa Barbara’s sunsets are a sight to behold: Getty Images/iStockphoto Santa Barbara is a picture-perfect coastal city within easy reach of Los Angeles. Temperatures here rarely dip below the mythical Southern Californian “70 degrees” (21 Celsius). The downtown area is small, and easily walkable – which is rare in these […] 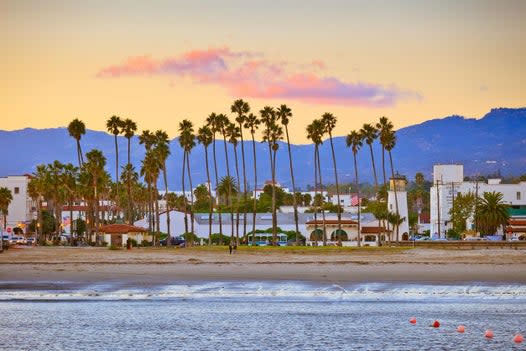