Joe Biden will accept the Democratic Party’s nomination from Delaware rather than risk traveling to Milwaukee. Chicago, the country’s third-largest school district, will have remote learning for public schools when classes resume next month.

Johnson & Johnson will supply 100 million doses of its experimental Covid-19 vaccine to the U.S. The U.K. agreed to invest $18 million in a Scottish vaccine-manufacturing plant, while Moderna Inc. said it has received $400 million of deposits for its potential Covid-19 shot.

There were 8,706 new cases detected, bringing the Lone Star state’s total to 459,887, the data showed. Fatalities rose by 235 to 7,497, though it was not immediately disclosed how many of those were from previous days or weeks.

North Carolina will remain in Phase 2 of its reopening plan for another five weeks, Governor Roy Cooper said in a tweet. The order keeps businesses including bars, movie theaters and bowling alleys closed, while limiting gatherings to 10 people indoors and 25 people outside.

“Other states that lifted restrictions quickly have had to go backward as their hospital capacity ran dangerously low and their cases jumped higher,” said Cooper, a Democrat. “We won’t make that mistake in North Carolina.”

Coronavirus cases in the U.S. increased 1.1% as compared to the same time yesterday to 4.79 million, according to data collected by Johns Hopkins University and Bloomberg News. That was below the past week’s average daily increase of 1.3%. Deaths rose 0.8% to 157,416.

Arizona reported 1,698 new cases, an increase of 0.9% from the day before. The seven-day average of new cases eased to 1.1%. The state Department of Health Services also reported 87 deaths, bringing the total to 3,932.Florida recorded 502,739 cases, up 1.1% from a day earlier, compared with the past week’s average increase of 1.7%. Deaths reached 7,627, an increase of 225, or 3%.Hawaii experienced a 5.8% increase in cases, bringing the total to 2,591, according to the data from Johns Hopkins and Bloomberg News.

California reported 202 new virus deaths, marking its second-deadliest day of the pandemic. The state has had 9,703 Covid fatalities.

Confirmed cases rose by 1%, or 5,295, to a total of 524,722. That was less than the 14-day average of 7,939 daily new infections, extending what Governor Gavin Newsom described earlier this week as an “encouraging” trend. Still, the data may be incomplete. The state has found some discrepancies in its health systems that have led to cases being underreported, Health Secretary Mark Ghaly said in a briefing Tuesday.

The data problems may also have affected the test positivity rate, which on Wednesday fell to 6.4% on a 14-day basis, the lowest in a month. But there are more concrete signs of improvement in California’s outbreak: Hospitalizations, unaffected by the reporting issues, have dropped 14% from a peak two weeks ago.

The National Collegiate Athletic Association Board of Governors required U.S. schools and conferences to allow student-athletes to opt out of participating because of concerns about contracting the coronavirus if they want to conduct fall sports amid the pandemic.

If an athlete does so, his or her athletics scholarship must be honored by the school, the NCAA said Wednesday in a statement. Divisions must decide by Aug. 21 if their fall sports seasons and NCAA championships should occur this year, according to the board.

“Student-athletes should never feel pressured into playing their sport if they do not believe it is safe to do so,” NCAA President Mark Emmert said in the statement. “These policies ensure they can make thoughtful, informed decisions about playing this fall.”

Houston-area virus hospitalizations dropped to the lowest since June 28 and are on track to continue declining through at least Aug. 18, the Texas Medical Center said .

A broader, regional census of hospitals in Houston and eight surrounding counties tallied a 2.9% decline in intensive-care virus patients in the 24-hour period ended Tuesday night. Earlier this week, the figure touched the lowest since June 30, according to the SouthEast Texas Regional Advisory Council.

A rash of poisonings and four deaths in May and June were tied to drinking hand sanitizer that contained methanol in Arizona and New Mexico, the Centers for Disease Control and Prevention reported. The incidents happened after President Donald Trump mused on ingesting disinfectants to treat the novel coronavirus.

The agency detailed 15 cases of methanol poisoning in its weekly report, including four patients who remain hospitalized and three who were released with permanent visual impairment. Just four of the 15 fully recovered, the agency said Wednesday.

The CDC’s report focused on products that contain methanol, which isn’t considered an acceptable ingredient in hand sanitizer because of its risks. The U.S. Food and Drug Administration has identified 67 alcohol-based hand sanitizers that contain methanol and are now being recalled. Both agencies advise consumers to check products to ensure they don’t include methanol.

Joe Biden won’t travel to Milwaukee this month to accept the Democratic nomination for president at the party’s convention due to concerns about the coronavirus and will deliver his acceptance speech from his home state of Delaware, where he’s done most of his campaigning since mid-March.

The Democratic National Convention Committee announced Wednesday that no speakers will travel to Milwaukee for the convention on the advice of health officials. Biden had been expected to attend the convention in person and deliver his acceptance speech on Aug. 20, the last night.

Most of the speeches were already slated to be virtual and Biden would have been one of the only people to deliver an in-person speech. Delegates to the convention had already been told not to travel, and the official party business was moved online.

Arizona testing numbers almost doubled in the state, and the positivity rate fell to 13% from 14.8% on Tuesday. In Maricopa County, the state’s most populous, health officials reported 14.8% positive tests, below the 16.3% rate from the previous day.

Chicago Public Schools, the third-largest school system in the U.S., will begin the 2020-2021 academic year with full remote learning amid an increase in the city’s coronavirus cases. The district will work with the Chicago Department of Public Health to assess if it’s safe to open to hybrid learning in the second quarter on Nov. 9.

The decision is based on public health data and survey results from parents that indicate a large portion are “not yet comfortable sending their children to school,” according to an emailed statement from the city Wednesday. Classes are set to start Sept. 8.

The rate of Floridians testing positive for the first time was steady at 10.9%, but new hospitalizations hit 621, the highest on record. But another gauge of the number of Covid-19 patients currently in Florida’s hospitals has shown the numbers ticking down in recent days.

New York City Mayor Bill de Blasio said travelers who have visited 35 states or territories with high Covid-19 transmission rates are required to complete the state’s traveler form as they pass through checkpoints at key entry points into the city.

The travelers are required quarantine for 14 days upon arrival. The Sheriff’s Office, in coordination with other law enforcement agencies, will operate registration checkpoints at major bridge and tunnel crossings into New York City to ensure people coming from these states complete health forms to support contact-tracing efforts.

The rapid speed at which researchers are developing coronavirus vaccines doesn’t mean that safety is being sacrificed, said Anthony Fauci, the U.S. government’s top infectious-disease expert.

“The rapidity with which we are moving relates more to technological advances with how you can make a vaccine even before you start testing it,” Fauci, the head of the National Institute of Allergy and Infectious Diseases and one of the top U.S. health officials, said on Wednesday in an interview with Bloomberg Television.

The Trump administration is spearheading the vaccine push out of a program it created called Operation Warp Speed, a name Fauci has criticized for giving the impression that development is being rushed. The Food and Drug Administration has said a vaccine must work in at least 50% of patients before it will approve the shot.

Sweden’s finance minister says the country’s light-touch lockdown may have contributed to a less severe contraction in the economy. Finance Minister Magdalena Andersson said in an interview in Stockholm that the decline in second-quarter GDP was “slightly less than we expected in June and it’s less than in many other countries.”

But the controversial virus strategy has also coincided with one of the world’s highest death rates, relative to population, and the government has admitted more should have been done at the outset to test people and protect the elderly.

The University of Connecticut has canceled its football season as the safety challenges created by virus placed the athletes at “an unacceptable level of risk,” David Benedict, the director of athletics, said Wednesday.

The football team has been on campus since early July and no student-athletes tested positive for the virus.

Large sporting matches and music festivals pose special dangers due to the crowds involved and only countries that have the virus under control should allow them, but they need to do so gradually and limit the number of spectators, said Mike Ryan, head of the World Health Organization’s Health Emergencies Program.

“We all want sport back, we all want our festivals back,” he said Wednesday. “But it’s very unrealistic in countries with community transmission that we’re going to see large gatherings like that this year.”

People need to consider all social events’ risks, said Maria Van Kerkhove, the WHO’s top epidemiologist on Covid-19. “It’s not only the football matches,” she said. “This should be considered about birthday parties, about sleepovers.”

Countries experiencing intense transmission throughout the population need to be careful about schools, Ryan said. “We have to do everything possible to bring our children back to school, and the most effective thing that we can do is to stop the disease in the community.”

“This shows what can happen if we let our guard drop and it should serve as a warning to all of us,” the Scottish leader said. “The risk of an even more significant outbreak is very real, which is why we have to take the decisive action we’ve announced today.”

Moderna Inc. said it has received $400 million of deposits so far for potential supply of its Covid-19 vaccine, as part of discussions with several countries.

Investors are waiting to see if Moderna strikes a deal to sell a big supply of its vaccine to the U.S. Its competitor Pfizer Inc. already has such a deal, at just under $40 for a two-shot regimen.

Vietnam reported 41 new coronavirus cases, with 40 tied to the coastal city of Danang and one returning from Russia, bringing the country’s total infections to 713, according to the health ministry.

Since the Danang outbreak started July 25, authorities have placed 20,645 people in quarantine centers, isolated 1,565 people in hospitals and ordered 97,831 others to stay home.

Wed Aug 5 , 2020
When the state issued its stay-at-home order in March, Gina LaMonica, 39, a partner with Chicago law firm Perkins Coie, had just returned from a work trip. Overnight, the COVID-19 pandemic turned her Park Ridge home into an office and a school as she and her husband juggled their careers […] 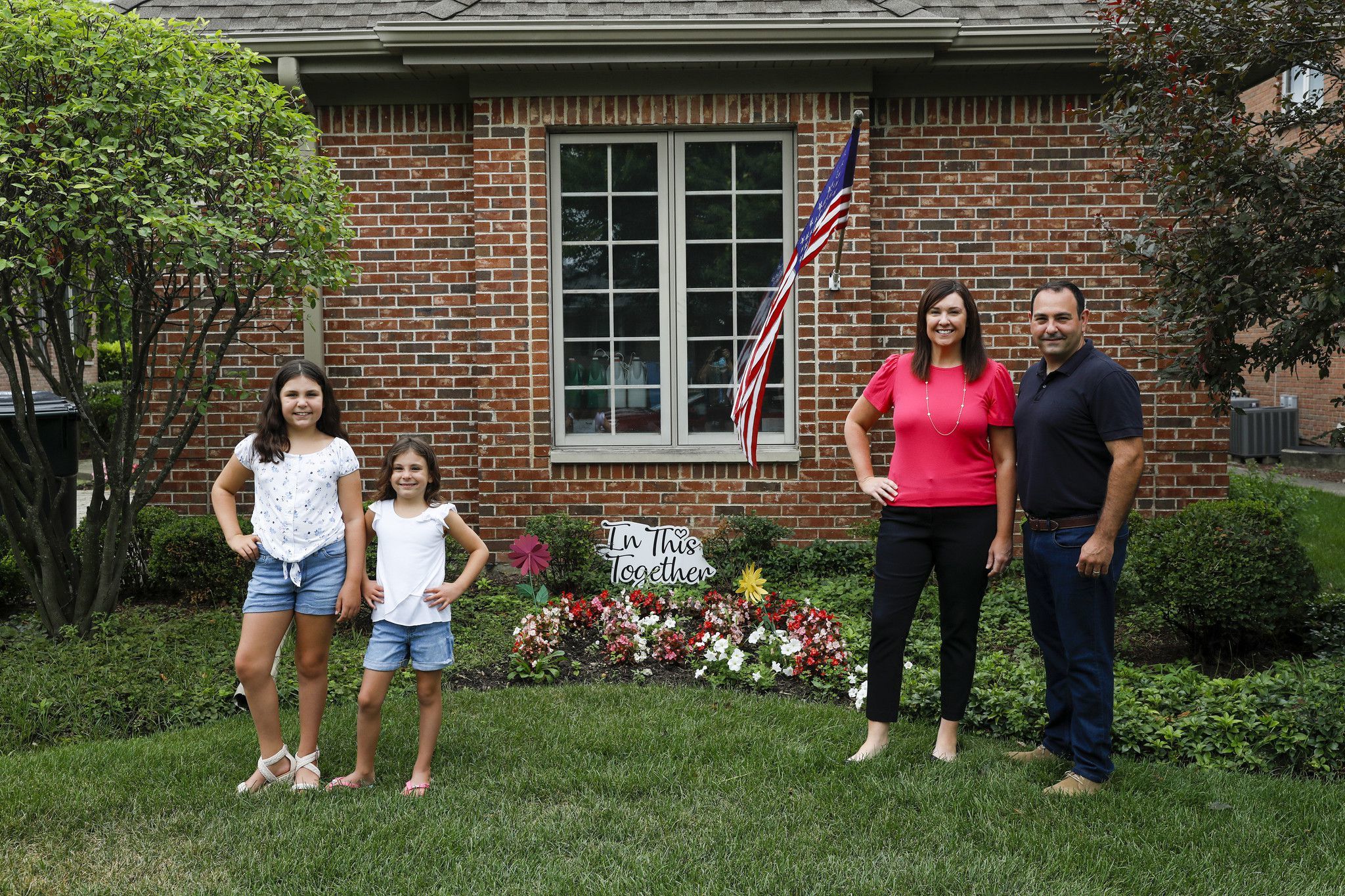