President Donald Trump has been on a rampage against public schools and colleges all week, threatening to use the power of the federal government to strong-arm officials into reopening classrooms.

But his effort is now creating a backlash: An overwhelming alignment of state and even Republican-aligned organizations oppose the rush to reopen schools. The nation’s leading pediatricians, Republican state school chiefs, Christian colleges and even the U.S. Chamber of Commerce have all challenged parts of Trump’s pressure campaign.

“Threats are not helpful,” Joy Hofmeister, the Republican state superintendent of public instruction in Oklahoma, told POLITICO on Friday. “We do not need to be schooled on why it’s important to reopen.”

Both Trump and Education Secretary Betsy DeVos have issued federal funding threats to schools that don’t fully reopen. On Friday, Trump went a step further in blasting online learning — which many school districts and colleges are planning to use this fall as an alternative or supplement to in-person instruction.

The American Academy of Pediatrics, whose prominent study on the importance of reopening schools was repeatedly touted by administration officials this week, criticized Trump’s threats to withhold money from schools as a “misguided approach” in a new statement on Friday.

The pediatricians, in a statement with teachers unions and school superintendents, also pushed back on Trump’s focus on schools providing in-person instruction, seemingly without any regard to the intensity of the pandemic in a community. Schools in areas with high levels of Covid-19 community spread, they wrote, “should not be compelled to reopen” against local experts’ judgment.

State school chiefs like Hofmeister are wary as well.

“Educating our kids shouldn’t be about politics — it’s about focusing on what’s needed,” she said, adding that schools are in need of federal support to help purchase things like safety supplies and internet hot spots to make sure vulnerable students have access to digital learning.

“We’re encouraging our schools to get past some of their concerns about, for example, wearing a mask or not wearing a mask,” she said. “Just wear a mask. That’s going to help us stay open.”

In Indiana, the home state of Vice President Mike Pence, the Republican state schools chief also responded to threats to cut funding to schools amid the pandemic in a tweet on Friday. “Students deserve an unprecedented federal investment in resources not cuts or diversion of funds,” said Jennifer McCormick.

Other school leaders have been similarly critical. “The bullish position of ‘open your doors or don’t get money’ is ill timed, misinformed and doesn’t reflect the nuanced work that goes into the decisions state and local leaders have to weigh,” said Noelle Ellerson Ng, of AASA, The School Superintendents Association.

But Trump’s drive to reopen schools has found support, certainly among congressional Republicans, and some state leaders.

Elsie Arntzen, the Republican superintendent of public instruction in Montana, said in an interview on Friday that she supported the Trump administration’s approach. She said that she didn’t view Trump’s comments about school funding as a threat to take away money.

“For a president to say that schools are connected to the economy, I embrace that,” she said. “I believe that we need to have our state open and it needs to be done very safely.”

Arntzen said she believes in local control of schools and would support a local superintendent’s decision to either close or reopen classrooms. But she praised the Trump administration’s focus on reopening physical school buildings as a way to return to normalcy.

As the administration continues to push its viewpoint, DeVos will be deployed for interviews Sunday on “Fox News Sunday” and CNN’s “State of the Union.”

And the Trump administration is planning to continue its reopening offensive into next week. Pence plans to travel to Louisiana State University on Tuesday to discuss “fall reopening plans and university sports programs” with education leaders and Democratic Gov. John Bel Edwards, his office said.

Schools that provide “a full school year of learning” and that are “fully operational” aren’t at risk of losing funding, said Education Department spokesperson Liz Hill in a statement. “But should a school choose to neglect its responsibility to educate students, they should not receive taxpayer money for a job that’s not being done.”

Congressional Democrats say the administration doesn’t have the authority to yank schools’ funding. And the Education Department has not given any public indication that it’s actually planning to make good on Trump’s threat with a plan to withholding existing funding.

But Trump’s criticism of schools went beyond a funding threat this week. He also targeted the online learning that many schools and colleges are planning to rely on this fall.

In Oklahoma, Hofmeister said “it’s perplexing” why the Trump administration would be so critical of virtual learning as an option — especially since much of the emergency relief funding passed earlier this spring was about helping schools transition to virtual instruction.

Indeed, as DeVos distributed the money, she recommended that school leaders use the funding for things like technology and training “that will help all students continue to learn through some form of remote learning.”

Hofmeister said that she had twice spoken to DeVos during the pandemic and had discussed the state’s investment in online tools to develop individualized learning. “That was applauded,” she said of her conversation with DeVos.

Higher education also has also been roiled over the past week by the Trump administration’s effort to oust international students from U.S. campuses unless colleges agree to physically hold classes this fall.

The proposed policy — which a top official said is meant to prod campuses to reopen — marks an abrupt reversal for the Trump administration, which set out different standards just a few months ago during the pandemic’s springtime peak.

“Anything short of 100 percent online is the direction that we’re headed,” Cuccinelli said. “This is now setting the rules for one semester, which we’ll finalize later this month that will, again, encourage schools to reopen.”

The U.S. Chamber of Commerce blasted the plan as “ill-conceived” and harmful to businesses. On Friday, a coalition of Christian groups, including the Council for Christian Colleges and Universities, the National Association of Evangelicals and Bethany Christian Services, said that international students shouldn’t be expelled from U.S. campuses during the pandemic.

“We believe the proposed temporary student visa rule violates tenets of our faith to ‘not mistreat the foreigner’ (Lev. 19:33) but to love these neighbors as ourselves (Lev. 19:34, Matt. 22:39),” the group led by the InterVarsity Christian Fellowship wrote in a letter to the Department of Homeland Security.

Harvard and MIT sued this week to halt the policy from taking effect, and a federal judge could determine if that occurs as early as Tuesday. Johns Hopkins University and California Attorney General Xavier Becerra have filed separate suits.

Taking one more punch at higher education, Trump tweeted Friday that he instructed the Treasury Department to review the tax-exempt status of U.S. schools, colleges and universities.

“Too many Universities and School Systems are about Radical Left Indoctrination, not Education,” Trump tweeted.

“Therefore, I am telling the Treasury Department to re-examine their Tax-Exempt Status…… and/or Funding, which will be taken away if this Propaganda or Act Against Public Policy continues. Our children must be Educated, not Indoctrinated!”

The Treasury Department did not respond to a request for comment on Friday.

The administration says returning to school is in the best interest of kids’ social and emotional development but also economic revival, considered essential to Trump’s reelection prospects in November.

Trump needs support from women and suburban voters in his reelection bid against Joe Biden, the presumptive Democratic nominee. Larry Kudlow, director of the National Economic Council, spoke on Fox News Friday about the bind that parents are in as they try to balance work and kids at home.

“You talk to a single working mom, she’s got to send her kid to school, the kids at home, she can’t go to work, she may not be able to afford help,” he said. “It’s also true with working folks who are two-person families and I think that’s an important part of this.”

But teachers unions, parents and other education leaders have said they need more funding to reopen safely and that Trump’s political priorities will put children and educators in harm’s way. “Public health agencies must make recommendations based on evidence, not politics,” said Friday’s statement from the pediatricians, teachers unions and superintendents.

Sat Jul 11 , 2020
An 84-year-old World War II veteran named Daniel Daley broke his neck outside a Florida bar after being slammed to the ground by an Orlando police officer young enough to be his grandson. It happened in 2010, after Daley left his car in the wrong parking lot. He came out […] 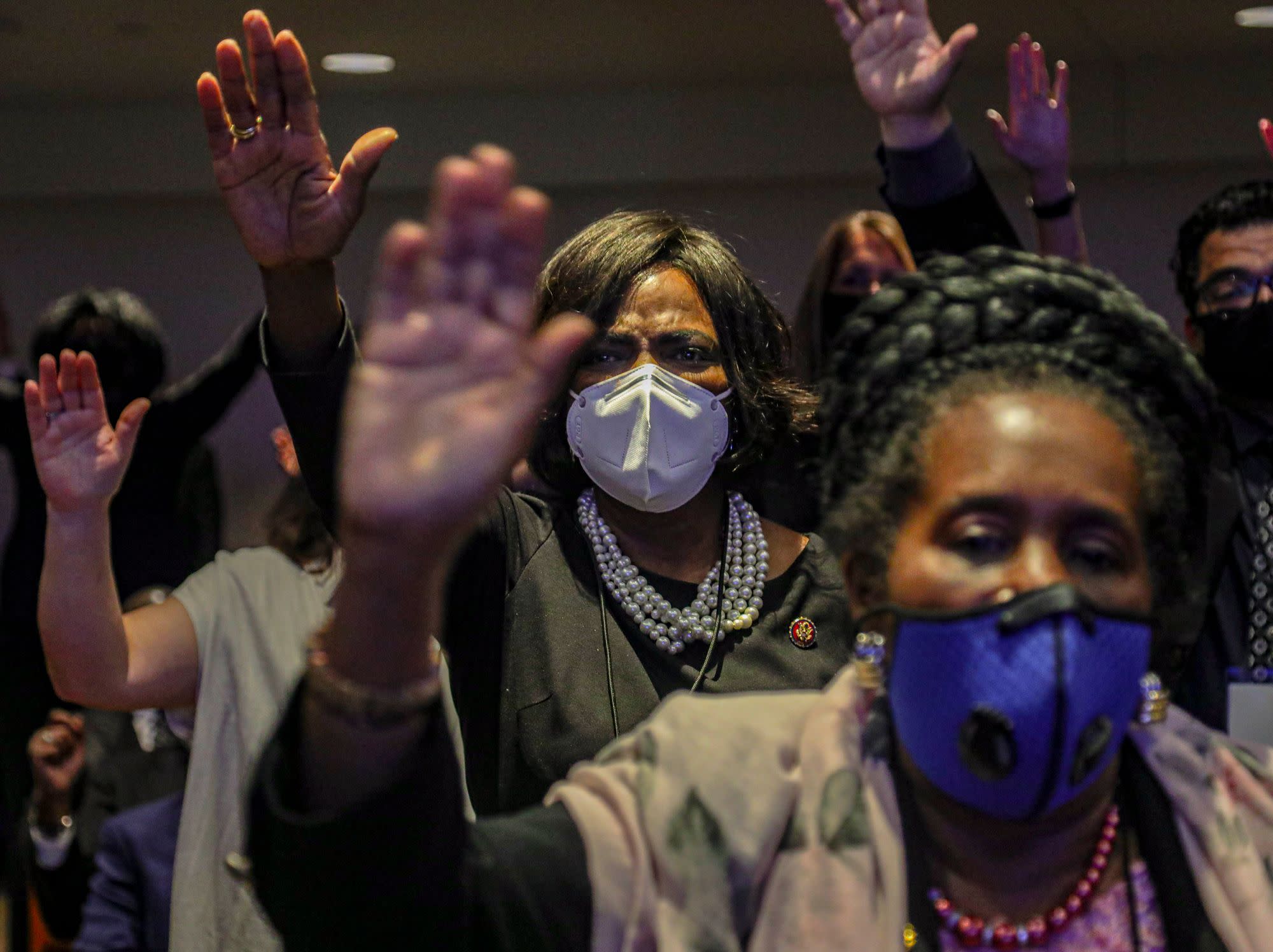