Patricia Reber walked out of the vaccine clinic at L.A.’s Lincoln Park pumping her arms overhead like a champion. A friend told the 80-year-old she had waited four hours for a shot at Dodger Stadium, but Reber was in and out within 30 minutes.

“This was wonderful,” Reber said from beneath a Kobe Bryant face mask. “I think they’ve done the best they can with the lack of federal help.”

But in the chaotic rollout of the COVID-19 vaccine, the triumphs were matched by heartbreaking disappointments and confusion as older residents struggled with appointment websites that crashed because of huge demand while workers waited for official information that never came.

Aria Shafiee, 53, was almost in tears because her attempt to enter the vaccination site at Crenshaw Christian Center in South L.A. had been flatly denied. Shafiee knew she was younger than the 65-year minimum for vaccination under California’s rules but hoped she could get an exception due to her health.

“I have preexisting conditions,” she said. “I have diabetes, and my daughter is a resident at UCLA and she lives with us, and they still wouldn’t let me in.”

In the days since California opened up the vaccine beyond healthcare workers and first responders, there has been a deluge of people trying to get their shots that has overwhelmed supplies and left officials warning they could run out soon.

Health leaders in counties across the state say they are getting only a fraction of the vaccines they are requesting from the federal government, and that is going to leave those eager to get inoculated disappointed.

Los Angeles County, for example, needs more than 4 million doses to provide the two-dose vaccine protocol to all healthcare workers and residents 65 and older, but to date has received only 853,650 doses. San Francisco feared it could run out Thursday but was able to keep going at least for now.

Some areas are doing better than others.

The city of Long Beach was among the first to allow vaccinations of older people last week, and is now expanding its distribution to food workers.

Long Beach Mayor Robert Garcia said a key decision made early on was not to plan out multiple days of vaccine distribution, but instead to vaccinate as many people as possible with the doses on hand. He acknowledged it is a riskier strategy because it can lead to the supply drying up.

“I said, ‘If we run out, that’s a good problem to have. Don’t be worried about running out. Be focused on getting as many doses out as possible,’” Garcia said. “I’ve been hearing about a lot of the horror stories in other places. That is not happening in Long Beach.”

Things have been less smooth in Los Angeles. On Thursday, the city became so overloaded that its vaccination registration website briefly shut down to new appointments.

Part of the confusion in Los Angeles began when the county said it could not move to residents 65 and older because it had not yet finished vaccinating some 500,000 healthcare workers who remain at the top of the priority list. After pushback, L.A. County Supervisor Hilda Solis issued an executive order late Monday directing officials to move ahead with expansion.

California has 61 local health departments, all with different operations that are currently tracking vaccine data differently. The state is working on a data tracking system, but so far, without a comprehensive assessment of how many doses each county has been allocated, how many each has received and how many each has administered, it has been difficult to compare the progress at a county-by-county level.

According to the California Department of Public Health, providers reported administering nearly 1.6 million doses statewide as of Tuesday (reporting is delayed, the department said). More than 4.2 million doses had been shipped to local health departments and healthcare systems that have facilities in multiple counties.

San Francisco issued a new health order this week requiring providers to report how much vaccine they receive and administer. Local health officials throughout the state have complained they had no way of knowing how well their communities were being vaccinated because they lacked information from the providers.

The confusion led some, like 34-year-old Art Gamboa, to give up on official sources of information altogether and rely on word of mouth.

One of about a hundred people in a quickly moving line at Lincoln Park on Thursday, Gamboa, an in-home healthcare provider, said he first learned from a friend that he was eligible for the vaccine. He navigated a “not very well-made interface” online but was ultimately able to secure a next-day appointment, he said.

“It looks like a mess from the outside, but it’s actually moving pretty fast,” he said as more and more people queued up under the palm trees.

A few paces behind him, Joe Ford, 59, said that his employer told him he was eligible for the vaccine about three weeks ago, but that it took him a good deal of time to navigate the system and secure an appointment. Several locations in the appointment portal showed no availability until March.

A child and family services worker, Ford said he was “fortunate enough and privileged enough to have access to the web” to even make his appointment.

“I’m thinking about people here across the street who don’t even have a cellphone,” he said, motioning toward homeless encampments near the outskirts of the park. “It’s another area of our society that just points out the disadvantages for the marginalized folks in our community.”

Others, like Holo Au, took Gov. Gavin Newsom at his word when he announced that Californians 65 and older could get the vaccine. A retired postal worker, Au, 71, was wearing gloves, mask and shield for protection, and although he had a medical walker with a seat, the Lincoln Park line moved so quickly that he couldn’t rest for more than a few seconds at a time.

It took him about two days to get an appointment online, he said, and he was eager to do so.

“I want to protect myself,” Au said. “All year I stay home. I have nothing to do.”

Although Los Angeles is still technically working its way through seniors and healthcare workers, few in line at the Crenshaw Christian Center seemed to work in hospitals: chiropractors, in-home caregivers and nursing students were among those waiting for their shot.

Many said they had just learned they were eligible and came to the site at the first opportunity.

“I’ve just been waiting for my chance,” said Silvia Vasquez, 49, as she exited the outdoor lot with a bandage on her arm. Vasquez works as an in-home caregiver, she said, so she couldn’t rely on a hospital system employer to administer her vaccine.

A group of four chiropractors who work together were among those waiting. Beth Mulhall, 38, said it’s been a difficult year for their practice and their patients, particularly since they’ve had to reduce capacity and gauge who needs care most urgently.

Mulhall said that their boss was the one who notified them they were eligible for the vaccine, and that he championed them as “groundbreakers” for being among the first in L.A. to get it.

Her co-worker, Fabian Martin, said they were “more like guinea pigs.”

“The biggest fear is that it’s new,” Martin said, noting that while concerns about the vaccine’s safety crossed his mind several times, he ultimately decided to go through with it.

“However inconvenient it is to get here,” Mulhall chimed in, “it’s less inconvenient than being in a hospital dying.”

But several in line Wednesday weren’t healthcare workers at all. Two nannies, a teacher and even a marketing associate came to Crenshaw Christian Center because they had heard they might be able to get a vaccine if there were leftovers at the end of the day.

Max Costello, a 42-year-old house flipper, has multiple construction projects in the area and decided to try his luck. Several of his crew members have had COVID-19, he said, and it’s challenging to maintain social distancing at a construction site without keeping teams small. He found a place in the hot sun where he could wait it out and see.

But despite the abundance of “leftover shot” rumors floating around, guards at the site said they couldn’t confirm them. David Ortiz, a spokesman for the LAFD, said via phone that he didn’t think there would be any leftover vaccines, and that if there were, they would be taken to Dodger Stadium.

Still, the rumors were enough to bring Shafiee, the 53-year-old on the verge of tears, to the site. After her request for entry was denied, Shafiee said she wasn’t sure what to do next. Out of work for more than a year because of the pandemic, she had been hoping that receiving the vaccine would be the marker of better days to come.

As it stands, she and her husband have to wear face masks inside their Redondo Beach home whenever their daughter comes in from her job at the hospital.

“I’m very angry,” she said, wiping her eyes above her mask. “It’s an awful situation. … It has been a tough year.”

Residents 65 and older can sign up for an appointment at the county public health department’s website, vaccinatelacounty.com. Residents without computer access can call (833) 540-0473 between 8 a.m. and 8:30 p.m. for assistance with reservations.

The city of Los Angeles is also offering the vaccine to anyone in Los Angeles County who is 65 or older, through a different online portal. That website connects patients to sites including Dodger Stadium, San Fernando Recreation Park, Lincoln Park, Hansen Dam and Crenshaw Christian Center.

‘Did you come to be entertained?’ asks ‘The Cube,’ that rare chance to see live theater amid a pandemic

Fri Jan 22 , 2021
The title character in The Cube, a daring new piece of meta-theater inside the Latino Cultural Center, wonders why human beings need to examine their existence and long for connection to other people, unlike other members of the animal kingdom. “Did you come to be entertained? Were you expecting music […] 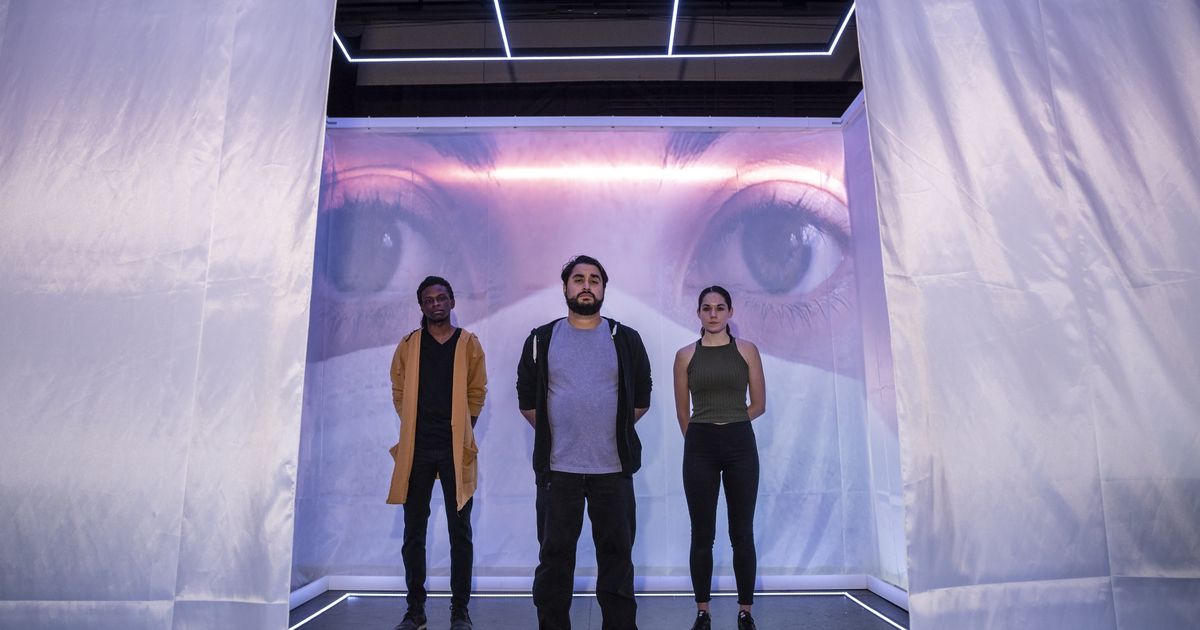