The task of naming the network of trails stretching from Pittsburgh to Cumberland, Md., was brought up at an initial planning meeting in the mid-1990s.

Ideas were thrown out. But naming something that didn’t yet exist took a backseat to the actual work, Linda McKenna Boxx said.

“Let’s see if we can actually build the trail and see if the name appears,” she said.

Well, they built it. And back came that pesky missing piece.

In 2001 at the Confluence Community Center in Somerset County, dozens of volunteers gathered to finally settle on a name.

Boxx, who was leading the effort, said there were 40 or 50 potential monikers for the former rail line turned trail system. Many had the word “Allegheny” in them.

Bob McKinley, who was trail manager for the Regional Trail Corp. at the time, suggested the name have the word “passage” in it.

“Passage really had a strong resonance with everybody,” Boxx recalled.

Another volunteer, Bill Metzger, proposed adding the word “great,” which he thought would make a nice acronym and logo, she said.

There it was — the Great Allegheny Passage. The decision 20 years ago still stands for a hardworking group of volunteers then and now, as well as the millions who use the trail system for short jaunts or long-haul trips.

“We’ve gotten a lot of great compliments on the name because it makes people want to do it. It’s like an adventure,” Boxx said.

It certainly has been an adventure, of the good kind, for many of the small towns along the 150-mile former railroad which runs through Allegheny, Westmoreland, Fayette and Somerset counties. The economic impact it has bestowed has been huge, said Bryan Perry, director of the Great Allegheny Passage Conservancy, a nonprofit that supports and coordinates work among all the trail volunteer groups.

While having the trail run through a town is a great asset for locals, it also means tourists are looking for places to eat and stay and help with booking and travel planning, he said.

“All of those businesses began, either they were launched or they’ve pivoted to target trail travelers, in the last 20 years,” he said.

That was the case for Mary Lou Rendulic, owner of Bright Morning Bed & Breakfast in West Newton, mile marker 113. She originally purchased a home there in 2001. When friends started asking to stay overnight so they could hit the trail early, she realized she had a potential moneymaker.

The Great Allegheny Passage has brought the small Youghiogheny River town a sense of pride and new businesses to attract trail users.

“It changed things up in town,” she said.

Rendulic owns three neighboring homes and manages a fourth with 13 guest rooms in all. The majority of overnight stays are trail users, some from as far away as Brazil, Japan and Germany, Rendulic said.

A 2008 economic impact study conducted by the Great Allegheny Passage Conservancy, then known as the Allegheny Trail Alliance, showed tourist spending tallied about $40 million between McKeesport and Cumberland, Md., Perry said. An updated analysis, including Pittsburgh, is expected to be completed in the next couple of months.

A study from 2014-15 showed the average amount spent on overnight stays was about $124. The majority of businesses surveyed had been established within the previous 10 years, and many said they planned to expand because of trail activity.

Perry said a lot of growth has been seen in Confluence, which is, just as its name suggests, at the confluence of the Youghiogheny and Casselman rivers and Laurel Hill Creek in Somerset County, not far from Ohiopyle. Twenty years ago, the small town at mile marker 62 had one restaurant and four places to stay. Now, there are four restaurants and 20 places to stay, he said.

“That’s a community that has really taken advantage,” he said.

Golden Triangle Bike Rental in Pittsburgh, in its 15th year of operation, also took advantage of a burgeoning need. After the passage became a reality, they began getting phone calls from bicyclists looking to rent equipment for multi-day trips, owner Tom Demagall said. Now, most of their business comes from Great Allegheny Passage users.

“That part of the business was developed on people just coming to us,” he said. “We built our services around them and the trail.”

Golden Triangle Bike Rental also helps with trip planning and itineraries for travelers from elsewhere in the country and world.

“It’s so accessible that it’s one of these trips that you could do without a tour group,” Demagall said.

In the 1800s, Western Maryland Railway and Pittsburgh and Lake Erie Railroad built the passages to transport coal, coke and freight. The lines cut out a path along the Youghiogheny River and through the Laurel Highlands between Pittsburgh and Cumberland. By the 1960s, the future of railroads was in jeopardy and the lines were abandoned.

Empty train stations and evidence of a once-bustling industry were left behind. In May 1975, a passenger train departed from Pittsburgh destined for Maryland for the last time.

That year, the Western Pennsylvania Conservancy bought 27 miles of the rail line between Connellsville and Confluence, including the section that passes through Ohiopyle. By the time 9 miles of trail were completed several years later, smaller volunteer groups cropped up elsewhere along the line with hopes of transforming their own sections.

Federal and state funding was directed to the project, and fundraising got underway. Boxx said donors were receptive to the endeavor, which ultimately cost about $80 million to complete.

The Allegheny Trail Alliance formed in 1995, including numerous smaller groups working on their own sections. Boxx, already a board member with the Regional Trail Corp., became president of the ATA, both of which were volunteer positions. While work continued behind the scenes, more of the former rail line was purchased, and sections of trail were completed.

In March 2001, the name was selected and the marketing of one continuous passageway began. That same year, 100 continuous miles between McKeesport and Meyersdale were finished, Boxx said.

But the work wasn’t done. More sections were completed in the next 12 years, with the entire passage being finished in 2013. In Cumberland, it connects to the C&O Canal National Historical Park, which takes riders 185 miles to Washington, D.C.

The Great Allegheny Passage is mostly level and is used year-round by bicyclists, walkers, runners and others.

Smithton Mayor Christine Tutena said she hopes the borough along the Yough River between West Newton and Connellsville, mile marker 88, can attract trail users the same way neighboring communities have.

She runs Adele’s Bed & Breakfast, not far from the trail in a quaint former restaurant and hotel built in the late 1800s that has been in her family for decades. Named after her grandmother, the establishment opened during the 2017 season, Tutena said.

“The GAP sort of started us out, and we’ve been really trying to play up on that,” she said. “We wouldn’t have a business without the GAP. This would just be an empty building.”

Tutena hopes attracting trail users into town will help other entrepreneurs see Smithton as a potential place to start a business aimed at the Great Allegheny Passage.

“There’s some empty properties we would just love people to take a chance on,” she said.

In 2020, the Great Allegheny Passage was visited by about 1.4 million people, up about 50% compared to 2019. An estimated 117,000 users were considered “thru-riders,” or those who traveled multiple days on the passage. The conservancy tracks trail usage between March and November with infrared counters interspersed along the passage and volunteers doing synchronized counts.

Volunteers are a huge part of the passage. Many of those original groups organized decades ago still exist and provide the upkeep for their respective sections. It is a lot of work, Perry said.

“The entire trail … is maintained by local folks, and 95% of them are volunteers,” he said. “When you see people out there with weed whackers and mowers and chainsaws at 4 a.m. after a storm,” they’re all donating their time.

Drainage is a huge issue that can wreak havoc on a trail.

“Our primary concern at the conservancy is figuring out how to raise maintenance dollars to support all these volunteer groups,” he said.

In the meantime, new interpretive signage will be installed soon in the Steel Valley section, and the Big Savage Tunnel in Somerset County will reopen April 9 after being shuttered for the winter. While the passage is complete, new trails are being constructed by other groups to connect to the system, Perry said. Towns along the passage are seeing an increase in visitation, and users are getting younger.

“I’m hopeful first-timers will come back,” he said.

GAP, by the numbers

Miles from Pittsburgh to Cumberland, Md., that goes through Allegheny, Westmoreland, Fayette and Somerset counties

Mountain Dew Will Reimburse Your Pass For Hunting, Fishing, Skiing And More With ‘Outdoor Stimulus’

Sat Apr 3 , 2021
Man powder skiing, Alps, Zauchensee, Austria getty In 2020, to help combat the isolation and immobility of staying at home during Covid-19, MTN DEW announced an “Outdoor Stimulus” program to reimburse outdoor enthusiasts’ hunting and fishing licenses or passes. Winners of the contest, originally the first 5,000 applicants, received a […] 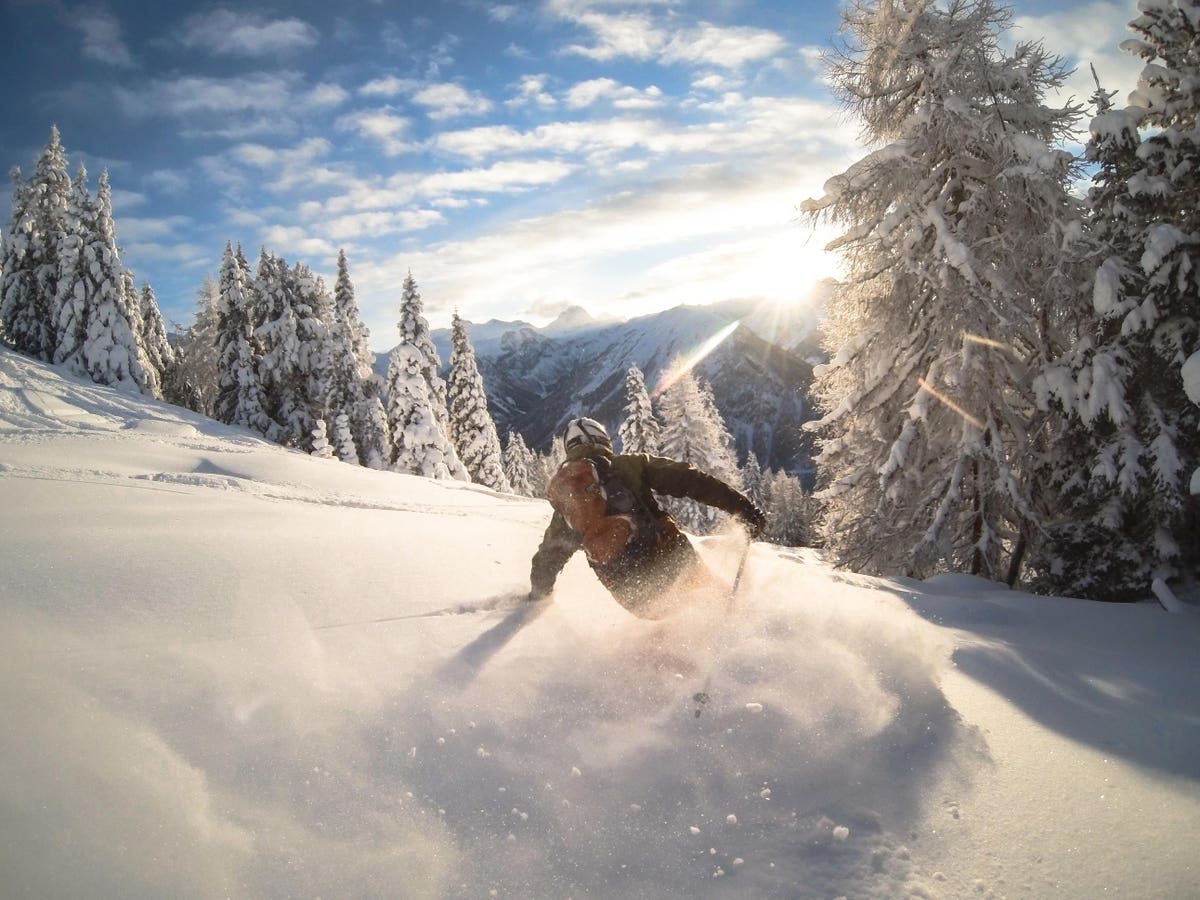