President-elect Joe Biden has laid out a proposal to address the COVID-19 pandemic and its devastating economic fallout.

In a speech to the nation Thursday night, Biden called for quick congressional action on the sweeping package, which will include steps to speed production and distribution of vaccines, an additional $1,400 in direct payments to individuals, an increased minimum wage, expanded unemployment benefits, aid to state and local governments and an expansion of aid to families with children.

Biden cast the plan as an immediate response to a continuing pandemic and an economic crisis that is worsening, as already high unemployment rates have once again started to rise after months of declines from record levels in the spring. Officials referred to it as a “rescue” package designed to address the most urgent needs, to be followed next month by a “recovery” plan that will address his more ambitious goals beyond getting back to “normal.”

Many of the proposals, however, also serve as down payments toward longer-run Democratic goals, including a one-year expansion of aid to families with children, which Biden said would “cut child poverty in half” over the next year.

The effort comes with a big price tag, which will make it a tough sell in a narrowly divided Senate where Republicans have tremendous power — even though they ignored a run-up of deficits under President Trump.

The Insurrectionist Next Door

Early images of the U.S. Capitol siege captured the extremism of intruders as the insurrection was broadcast live. There was a bare-chested man in a furry headdress, another wearing an anti-Semitic sweatshirt, a third carrying a Confederate flag.

But the reality of the Jan. 6 attack, captured in affidavits and court filings in dozens of criminal cases, is that the crowd included not just fringe radicals but also a broad cross-section of President Trump’s supporters — people with office jobs, kids and mortgages, and otherwise respectable public reputations.

Among those identified and charged with crimes by law enforcement as participating in the insurrection were municipal employees, former members of the military, social media influencers, police officers and a school therapist. Also charged were a data analytics company CEO and a two-time Olympic gold-medalist swimmer from USC.

Current and former law enforcement officials said a large chunk of Trump supporters so fervently believe the election was stolen that they are likely to prove to be security risks for months to come.

— The number of National Guard troops coming to Washington to assist with security has so far grown to about 21,000, Army Gen. Daniel Hokanson, chief of the National Guard Bureau, told Vice President Mike Pence at a briefing. Officials have said the number could grow as law enforcement agencies review the ongoing threats.

— A mere 60 minutes after Biden is sworn in Wednesday, Trump is slated to stand trial in the Senate on a charge of inciting a riot in the same building. But a conviction might not be the only way to bar Trump from holding federal office again.

— Some who stormed the Capitol, including a Proud Boys leader, claim they were citizen journalists. That raises the question: Who should be considered a journalist?

The hoped-for rollout of the COVID-19 vaccine for people 65 years and older in Los Angeles County was met with chaos and confusion, with the county saying it could be weeks before that group will be able to receive their shots.

Thursday was filled with frustration for seniors trying to make appointments. Some were able to schedule them at retailers, but it’s unclear whether those appointments will be honored. Calls and emails poured into doctors’ offices and pharmacies, and appointment websites run by retail pharmacies reportedly crashed under the flood of requests.

County health offices fielded flurries of phone calls from residents confused by the mixed messages from state and local officials. Gov. Gavin Newsom, in his announcement Wednesday, said people 65 and older could get vaccinated, but local health officials followed with public statements soon after, saying the opposite.

But in Orange County, more than 10,000 people signed up on the first day. What to do in L.A.? Here’s how to sign up to find out when it’s your turn to get the vaccine.

— One in three L.A. County residents have been infected with the coronavirus, according to new estimates by county scientists, an astonishing sign of how rapidly the virus is spreading.

— Poor neighborhoods and the region’s Latino and Black communities continue to bear the brunt of illness and death. New data show deaths among Latinos are rising at astonishing levels.

For more, sign up for Coronavirus Today, a special edition of The Times’ Health and Science newsletter.

Global warming pushed temperatures into record territory in 2020, in effect tying 2016 as the hottest year on record, according to data released by U.S. science agencies. But unlike in 2016, researchers said, there was no powerful El Niño in the Pacific Ocean to boost temperatures; instead, it was an unmistakable signal of human-caused greenhouse gas emissions.

Last year’s average global surface temperature was 2.2 degrees Fahrenheit above the late 19th century average, according to NASA. It was the fifth consecutive year of more than 2 degrees above that base line.

Monday is Martin Luther King Jr. Day. In his years as a civil rights activist, King made several visits to Southern California.

In 1965, he clashed with city officials and law enforcement after the Watts Riots. On other occasions, he gave speeches that drew media and thousands of people. When he was assassinated in 1968, The Times reported that 20,000 people attended a memorial service at the Los Angeles Coliseum.

— Practice deep listening and get more out your music with tools and tricks.

— Looking for new takeout options? Here are 14 exceptional new restaurants for a better 2021. You can even order konbini-style egg salad sandwiches via Instagram.

— Even under California’s pandemic restrictions, campgrounds, trails and more are still open this holiday weekend.

Due to the holiday, there will be no Today’s Headlines newsletter on Monday. Expect the next edition in your inbox on Tuesday.

— Newsom activated 1,000 members of the California National Guard to help protect the state Capitol, adding to an already robust response by law enforcement after FBI warnings that armed demonstrators might target statehouses in events similar to last week’s attack on the U.S. Capitol.

— A California man who allegedly smashed a window at the U.S. Capitol last week was arrested by FBI agents at his family’s home in Glendora, authorities said.

— It was the first blockbuster case to surface in the federal corruption probe of L.A. City Hall: former Councilman Mitchell Englander pleaded guilty to a single count of scheming to falsify material facts to the FBI. Now probation officials say he deserves no prison time.

— Justice Department leaders under President Trump knew their 2018 “zero tolerance” border policy would result in family separations but pressed on with prosecutions even as other agencies became overwhelmed with migrants, according to a government watchdog report.

— A former Mexican defense minister who was arrested at Los Angeles International Airport last year on a U.S. drug-smuggling indictment and later returned to Mexico for possible prosecution will not face any charges in Mexico, authorities said.

— As India launches an ambitious effort to vaccinate 300 million people against the coronavirus within six months, it is employing two vaccines. Uncertainty surrounds one of them.

— Police in Belgium arrested 116 people after a protest over the death of a young Black man who collapsed in police custody turned violent.

HOLLYWOOD AND THE ARTS

— The Disneyland and Disney California Adventure theme parks, closed for nearly a year because of the COVID-19 pandemic, are ending their annual pass program as we know it.

— Even as a pandemic and security issues have forced organizers to scale back inauguration celebrations, the event will remain star-studded. Lady Gaga will sing the national anthem with a performance from Jennifer Lopez, plus a TV special featuring Tom Hanks, Justin Timberlake, Jon Bon Jovi, Demi Lovato and Ant Clemons.

— Betty White is set to turn 99 on Sunday, and she has some wild plans to mark the big day — even in the pandemic.

— Illusionist Siegfried Fischbacher, the surviving member of the duo Siegfried & Roy, has died in Las Vegas at age 81.

— The Trump administration is starting to update federal motor vehicle safety standards to exempt self-driving cars from crashworthiness standards that are applied to cars operated by humans, a move questioned by safety advocates.

— Federal rent relief is coming. Here’s what to expect in California.

— Quarterback Jared Goff will lead the Rams into their NFC semifinal game against the Green Bay Packers at cold Lambeau Field. Columnist Bill Plaschke says it will serve as a template for his future with the team.

— The L.A. Kings, who lost their season opener to Minnesota, joined other NHL teams in having advertising on their helmets. Instead of a corporation, the Kings’ partner is the California HOPE Crisis Counseling Program, a mental health and wellness initiative funded by the Federal Emergency Management Agency and run by the California Department of Health Care Services.

— The violent attack on the Capitol was already a disgrace. Now some lawmakers are adding insult to injury in trying to blame Black people, writes LZ Granderson.

— Arnold Schwarzenegger spoke up when too many other Republicans cowered behind lies, afraid of their voters and the truth. He’s right — they’re spineless, writes columnist George Skelton.

WHAT OUR EDITORS ARE READING

— If Trump is convicted in a Senate trial, does he keep his post-presidential benefits, Secret Service protection and the like? (CBS News)

— Horror movies were popular last year, and there’s a psychology as to why. (Nautilus)

Renie Bardeau, who died at 86 this month, was a revered photographer credited with documenting Disneyland’s every nook and cranny, archiving the amusement park’s evolution for nearly four decades beginning in 1959. He became a celebrity in his own right to diehard Disney fans, some of whom own autographed copies of his work. His daughter said he embodied “sticktoitivity” — a phrase Walt Disney is said to have coined to describe perseverance.

Comments or ideas? Email us at [email protected]

Fri Jan 15 , 2021
Canoe campers permitted to visit the Boundary Waters Canoe Area Wilderness will be required to get educated on what it means to “leave no trace” after a pandemic-driven surge in visits last season saw everything from people cutting live trees to leaving campfires unattended. The U.S. Forest Service, which manages […] 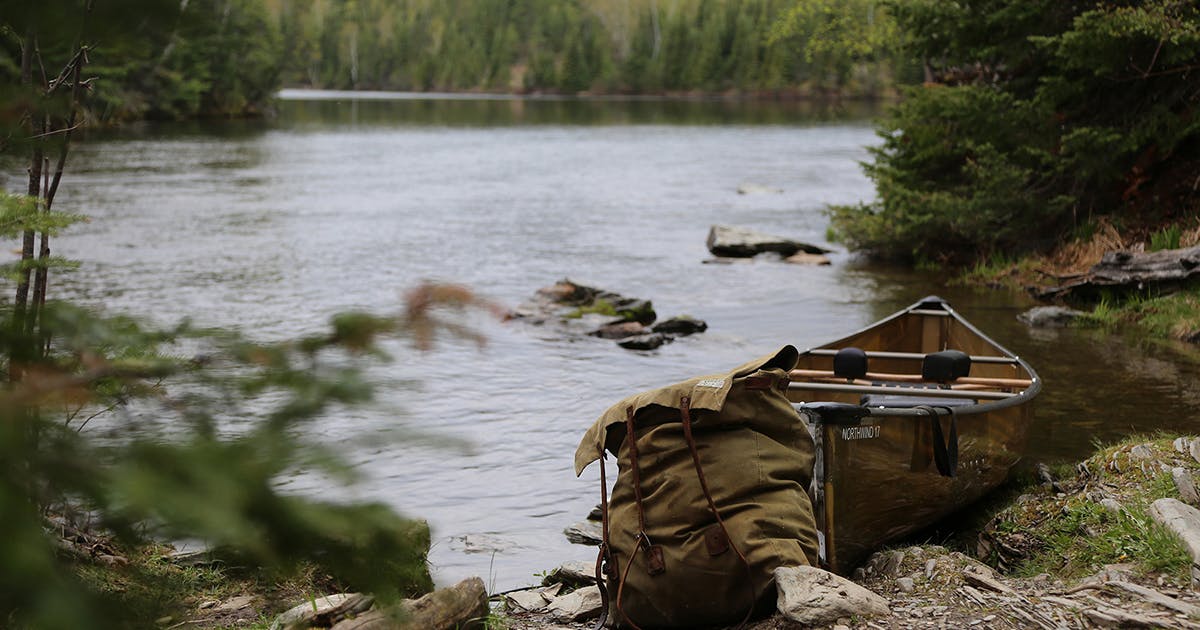