Late Monday night, a group of male TikTok stars who belong to the Gen Z influencer collective known as the Sway House charged up the streets of the Hollywood Hills. They were on their way to the Hype House to confront a fellow TikTok star, Chase Hudson, 18, about comments he had made earlier online.

Some of the most high-profile teenage influencers, including Hudson, had spent the previous several hours waging war on each other online in an event that became known as “TikTokalypse.”

They posted clapbacks on Twitter, stoked controversy on Instagram Live and shared cheating accusations using the Notes app. Top YouTubers like Tana Mongeau poured gasoline on the flames by reacting in real time on TikTok.

Shortly after the Sway House boys stepped out of their car and paparazzi crowded around, they were ushered into the 14,000-square-foot Hype House mansion and resolved the feud in private. At 1:20 a.m., TikTok star Jaden Hossler, 19, tweeted: “we talked. no fighting. it’s settled.”

The whole event felt ripped from reality TV. Feuds, cliques and rivalries have long captivated viewers of shows like “Jersey Shore,” “The Real World” and “Keeping Up With the Kardashians.”

Now, many wonder if a new wave of unscripted shows about the lives of young influencers could captivate the next generation of viewers. “This is a TV series waiting to be made,” Hemanth Kumar, a film critic, tweeted about the events Monday night. “Who’s calling dibs on this one?”

The Race Is On

Over the past several months, every major TikTok collective has taken steps to pursue a potential reality show.

Wheelhouse, a production studio, is working with the Hype House to pitch a reality show billed as “the modern day Mickey Mouse Club.” The Clubhouse, another Gen Z influencer collective, is working with ICM to shop the idea of a show around, which they hope to produce using an in-house team.

Clubhouse is also working with “Jawline” director Liza Mandelup and Concordia Studio, a production company, on a potential project. The Kids Next Door house has met with production companies.

Charli D’Amelio, the most-followed influencer on TikTok, and her family are also exploring the possibility of a reality show and have signed a production deal with Industrial Media, producer of shows like “American Idol” and “90 Day Fiancé,” her agent said.

TalentX, the management company behind the Sway House, said it hasn’t signed a shopping agreement with a production company yet, but has been taking meetings. “We are having multiple conversations now around town,” said Warren Lentz, CEO of TalentX. “It’s clear there’s a strong appetite and there’s white space that a streaming platform or network hasn’t stepped into. We have come up with five or six different show ideas that we’ve been talking with outlets about. I do know other houses are having those conversations as well.”

The boundaries between the online influencer world and reality TV are porous. Reality stars often amass large audiences on social media and pivot to full-time influencer-dom. And casting directors are known to pluck potential characters from the internet and put them on the big screen.

Tila Tequila, for instance, was a Myspace star before landing her own show. “The Amazing Race” and “Big Brother” have cast famous YouTubers in hopes of tapping into their young and engaged audiences online.

YouTube itself has greenlit many shows by its homegrown stars through its YouTube Originals program. In James Charles’ “Instant Influencer,” which premiered earlier this year as a YouTube Original, contestants compete to become the next great beauty vlogger.

But so far, there hasn’t been a hit reality show centered solely on the lives of a bunch of influencers.

The show that has come closest is “Reality House,” a 2019 unscripted series featuring a group of YouTubers living together in a giant house. YouTubers Kian Lawley and JC Caylen started the show and tried to get it picked up by a TV network or streaming service.

“We did take the show out to market but were unsuccessful in selling it,” said Andrew Graham, a talent agent at Creative Artists Agency. Still, it was a hit online. “Reality House” ran for two seasons, with a third pending, and reached nearly 1 million views per episode.

And though the idea of a group of internet-famous young people with big personalities all living together in a Los Angeles mansion may seem like a natural fit for TV, Julie Pizzi, the president of entertainment and development at Bunim Murray, a production studio behind hit shows like “The Real World” and “Keeping Up With the Kardashians,” said it’s much more difficult to pull off than one might imagine.

Pizzi said Bunim Murray has met with several influencer houses including Hype House, Sway House and Clubhouse. “The problems we have had is that often these houses are looked at more like a business,” she said. “They want to show the business of making these videos as opposed to the personalities and personal lives of the characters.”

“We’d have a hard time selling a show about these TikTokers doing their videos for TikTok, or getting deals with advertisers,” Pizzi said. “We’re more interested in their lifestyle and how they interact with each other, what the relationships are like between the different people in the house.”

Disparate management and representation is also an issue. In some houses, each influencer has their own separate management team and sometimes different agents. “Even just for a pitch it’s an enormous amount of legal work. You have to put every single person under contract,” Pizzi said.

Age, too, is a hurdle. While scripted shows starring teenagers and young adults like “Euphoria” and “13 Reasons Why” are huge successes, unscripted shows featuring a similar age range are less common.

“You don’t really want to put very young people in too mature situations,” Pizzi said. “It feels a little sensational. It’s very rare to even put an 18-year-old on a dating show.” Bunim Murray has had the most success with programming for Snapchat. “Endless Summer,” a docudrama series starring YouTuber Summer Mckeen, for instance, ran for several seasons on Snapchat.

“There’s very few homes for a show like this,” Graham said, referring to an influencer reality show. Though MTV did pick up a show about Mongeau for its YouTube channel, the company now seems to be “focused largely on reboots and proven Viacom/CBS talent,” Graham said.

“That’s where you’d think this show would go, but it doesn’t fit their current mandate,” he said. “You could take a swing at Netflix given that they have a number of unscripted formats that are working there — I’m thinking of ‘The Circle.’ Maybe there’s a world where you take a shot at a place like Amazon, but I don’t think there are a lot of homes for it.”

Some influencer collectives are moving forward on their own, storyboarding reality-type shows for social platforms and monetizing them through advertising deals. Henry Coxall, a founder of 404Haven, an influencer house soon to open in the Hollywood Hills, said the company has already hired an in-house production team to create a reality show on Twitch.

“We’ve discovered a big part of this online culture is feeling connected,” Coxall said. “People want to feel part of that story that’s occurring. We were like, how do we take our influencers’ lives and allow fans to get involved on a safe level that our talent feels comfortable with?”

Choose Your Own Adventure

Many in the online creator space believe we’re only in the early stages of a significant shift in the entertainment landscape, and the first wave of Gen Z talent is just beginning to emerge.

“I think we’re going to see this whole field expand over the next year or two, and the rise of TikTok could be that catalyst,” said Avi Gandhi, executive vice president of digital at Wheelhouse. “I think the reality is a lot of content buyers and distributors, whether it’s traditional cable, streaming services or digital platforms, are looking to bring audiences their way. And they’re looking for stories from talent who have great audiences.”

Maxwell Mitcheson, head of talent at TalentX, said that “TikTok stars are the Lauren Conrads of their generation. Everything they do, for better or worse, garners traditional media coverage, from liking a shady comment to going to dinner with another creator.”

Though each of these content houses may be pitching its own show, influencers recognize the value of playing off each other. “A lot of people peg these houses against each other, but at the end of the day we’re all here to make content for our fans,” said Alex Warren, 19, a member of Hype House.

“There’s this notion that got famous a few years ago of ‘the second screen,’” he said. “Today, there’s a third or fourth screen based on viewers on phones switching between different apps. They go back and forth between IG Live and TikTok and Twitter accounts, it’s almost like each fan is on their own choose your own adventure. They come up with their own narrative around these characters in each story.”

High Schools not playing yet? Kids still finding options to get on the field

Sat Jul 11 , 2020
Charlotte-Mecklenburg Schools, like many school systems throughout North Carolina, have not yet begun summer workouts for high school sports. With school activities on pause, some area student-athletes are still finding ways to get into the game this summer, in part to fight boredom, stay sharp and to find new ways […] 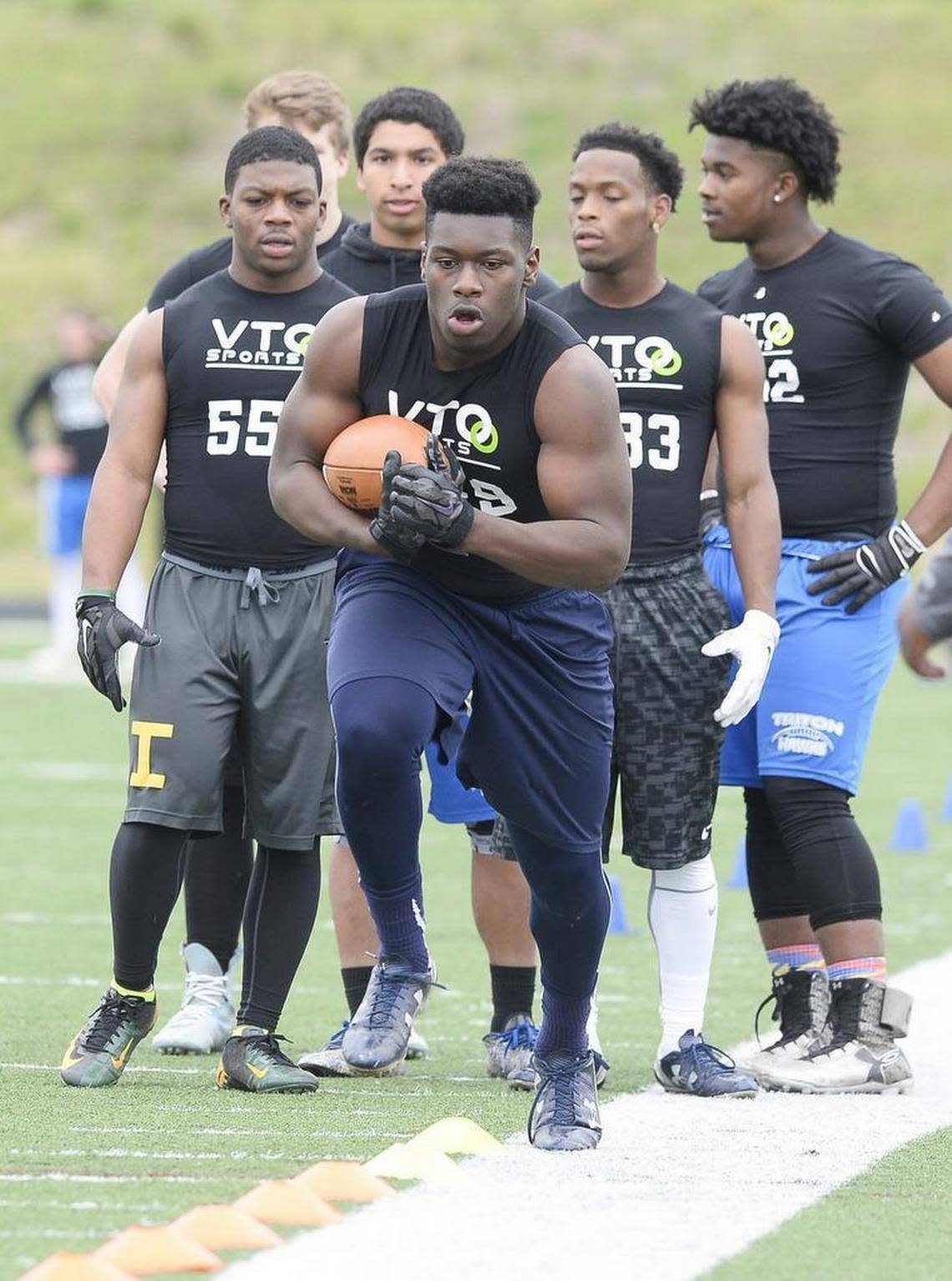