“Mindfulness” has been all the rage in the last five years and should need no explanation. Yet I googled it anyway. “The quality or state of being conscious or aware of something,” Google Dictionary tells me. It says everything and nothing, because mindfulness has come to mean many things. It’s about being fully present. It’s having a relaxed-alert state of mind. It’s compassion. It’s meditation, both Buddhist and secular. It’s mindfulness-based stress reduction (MBSR), which helps people better understand and manage their thoughts and emotions. It’s a lifestyle.

After spending weeks with Renyung Ho – mostly imaginatively, from reading the profiles written about her, it seems to me that the Vice-President of Brand HQ at Banyan Tree Holdings embodies that multi- faceted nature of mindfulness. Helming a unit responsible for brand development, alignment and strategy, the 36-year-old leads the group’s transformation drive towards a digitally forward ecosystem of brands advocating well-being and sustainability. The mother of one is also a founding member of the philanthropist platform AVPN Gender Network, and a business leader for the Red Dot for Pink Dot 2021 campaign.

As the hotel industry makes a full-court press on bringing business back to their properties, Renyung has been focusing on refining the company’s wellness offerings, starting inwards with its employees.

“The ongoing pandemic has no doubt affected the mental health of most people across the globe, and we’ve taken steps to prioritise mental well-being and the skills of effective self-care,” reveals Renyung in our pre-interview over email. “These initiatives, which we conceived before Covid-19, became all the more important because we are in an industry that continues to be severely affected. As leaders, it’s our job to help alleviate that for our teams at this time – after all, we can only look after our guests when we look after our associates.”

Over the past year, Banyan Tree underwent an inside-out journey to help employees build resilience, self-awareness and self-care through group-wide training modules centred around empathy, positive psychology and MBSR. The company has also begun rolling out its Organisational Wellbeing Index in place of its usual annual associate surveys to assess employees’ state of well-being.

It is a set of 64 lifestyle questions, querying individuals’ habits and practices such as the amount of water consumed daily, engagement in sports, time spent in nature as well as relationships with others. New guidelines, training and activities will then be implemented according to each property’s overall results. “It’s irresponsible to ask your people to provide services and products that promote well-being when you’re not doing it for them first,” Renyung says when we met in person at Straits Clan.

“Our approach has been a bit more about creating empathy, respect and psychological safety for people to bring up issues they faced,” she adds. “One of the first things we’re working on is empathy-building through courageous conversations. Empathy is a core aspect of hospitality. It’s a resource, a skill set and an asset that we have to cultivate, like attention. This is all part of mindfulness – to have compassion for other beings.”

Sustainability runs in Renyung’s family. Her parents, Ho Kwon Ping and Claire Chiang, spent years rehabilitating a plot of desolate, pollution-ridden land in Phuket, Thailand, before building their first Banyan Tree Resort in 1994. To help support marine conservation efforts, the company opened a marine lab on Banyan Tree Vabbinfaru in Maldives to protect, enhance and raise awareness of surrounding reefs. Since 2006, it has been publishing annual sustainability reports that chart the company’s environmental and social performance. EarthCheck, a scientific benchmarking, certification and advisory group for travel and tourism, was brought on as a strategic partner.

Claire, a former Nominated Member of Parliament and lifelong advocate for women’s rights, set up retail arm Banyan Tree Gallery as a showcase of traditional crafts by local artisans from its worldwide resort destinations. And these initiatives only scratch the surface of the vast amount of work Banyan Tree commits to in bettering the world.

Looking at Renyung’s career trajectory and her background, it feels as if her path in hospitality has been paved. Post-graduation, she worked as a management trainee at Banyan Tree Mayakoba in Mexico and was promoted to Pre-Opening Manager in the same year. She continued to move up the ranks to Associate Director, but broke away from the family business three years later in 2011 to pursue personal interests. She co-founded Kennel, a collaborative workspace for creative entrepreneurs before co-working spaces were even a thing.

Right around that time, she also co-organised Creative Mornings, a morning lecture series for creatives. Then, in 2014, she launched Matter, a socially- conscious clothing label that champions provenance, sustainability and fair wages for its artisans. Her family business acquired the label two years later, and she returned to manage the retail operations at Banyan Tree Gallery, prior to her current role.

But Renyung would say her choices are her own. “My parents know me well enough that any kind of mapping out would have the opposite effect given my character. I think they had expectations but they tried very hard not to make them explicit. Also, it’s not a birthright to be in the business. It’s a privilege and a position you have to earn.”

The Ho children didn’t grow up like entitled trust fund babies. Renyung tells me how her mother grew up on Race Course Road, crammed in an apartment with maybe 10 other people, and how she first tasted meat at 12 years old. “She always reminded us about the value of things,” she recalls. “When we were kids, we earned our pocket money. We had to justify what we wanted to buy. The only thing that we didn’t have to justify was books. Otherwise, everything else you’d have to build a pitch for – how it adds value to us. You can’t just buy whatever you want. We kept a ledger with our parents for Chinese New Year money. We learnt that the price of something is not the same as the value of something, and that was something that they’ve always ingrained in us.”

Still, Renyung is painfully aware of her privilege. “I left school at 18,” she says. “I remember saying to my parents that the boys get to go to National Service for two years and I want to go to the School of Life. So I did a series of volunteering stints and worked in different hotels. I went to the Maldives and worked at the resort’s Marine Lab, cleaning coral reefs with a toothbrush. It was foundational in giving me an appreciation and love for nature.” She continues: “I also volunteered after the tsunami in Khao Lak in Phuket, working with the military to distribute supplies and knocking down homes that were destroyed. What I took away from that was that life is really unfair. I had a very strong sense that I was not alone. I could almost feel the energy of the people who died, in a way. In disaster we’re all equal. But at the same time, it’s so unfair what happened. So much of life is a lottery – where you’re born, who you are, where you are at a certain time. I had this grounding sense that I grew up with all these opportunities in front of me – not just being Singaporean, but being able to travel, to take these years off, not ever worry about what I wanted to eat… That is a huge privilege.”

This revelation elicited guilt. “I felt guilty of what I have for a while,” admits Renyung. “But guilt can be powerful, because guilt is about yourself. Feeling guilty is useless. It’s not helpful to other people. But you can turn it into something that is outward-looking. The awareness of privilege is a starting point. And how do I work with it in a way that creates a more even playing field for other people? If you have privilege, it means you have the power to respond, to shape the world around you. And that’s our freedom.”

Renyung was 19 when she stood on the shore of Khao Lak Beach, taking in the devastation the tsunami had wrought. Since then, these questions have guided her professional undertakings, from Kennel to Matter and, now, at Banyan Tree. I ask her how she would teach her son about privilege. “Oh, God,” she says, and pauses for thought. “I think it’s less talking and more demonstrating. I think volunteer work is powerful. It’s in the small things. It’s exposing him to the act of giving and volunteering, for him to meet and connect with other children who are not in the same place as him and have what he has. My hope is that he’ll come to the realisation that we’re all fundamentally the same, except for where we are born.”

Time passes quickly with Renyung. Our two-hour-long conversation was less of an interview and more of a dialogue, as she would often ask about my thoughts or personal experiences. Connection is a two-way street, and Renyung is a natural at making them, with her calm and easy demeanour, bright smile, soothing voice and eyes that look into your soul. I tell her how much I love her freckles. “I put sunblock way too late in life,” she quips. Poet Ellen Everett wrote: “I let the sun give me freckles so I could share a piece of sunshine with someone in the dark.” I think that’s Renyung.

The post Renyung Ho: The second-gen leader of Banyan Tree on the importance of mindfulness appeared first on Prestige Online – Singapore.

Mon Jan 11 , 2021
Cole Crosby ran the length of New Jersey, from the High Point Monument to the Cape May Lighthouse, over the weekend. It just took him a little longer than he planned. The 32-year-old ultra-marathoner from South Brunswick reached the lighthouse at 10:30 p.m. Sunday, completing a 197-mile journey from the […] 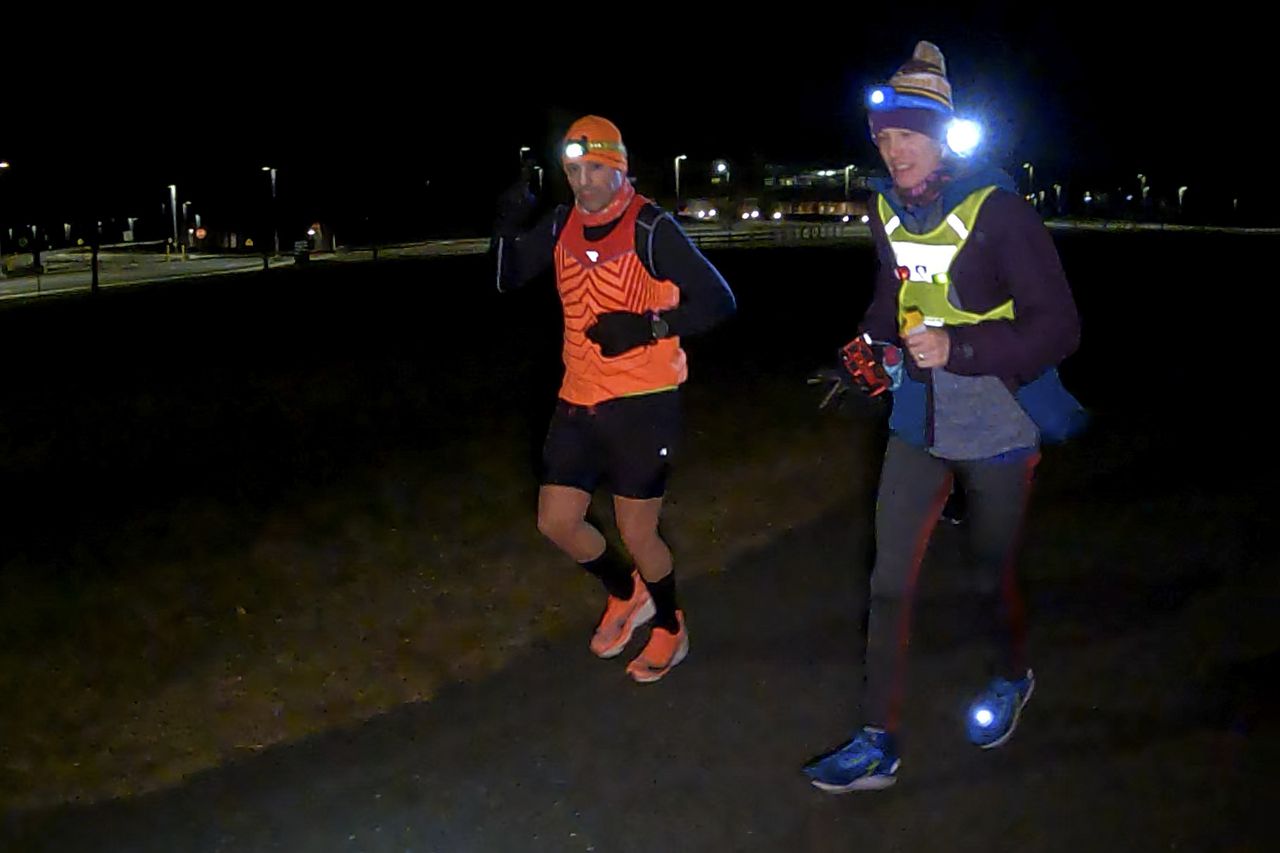