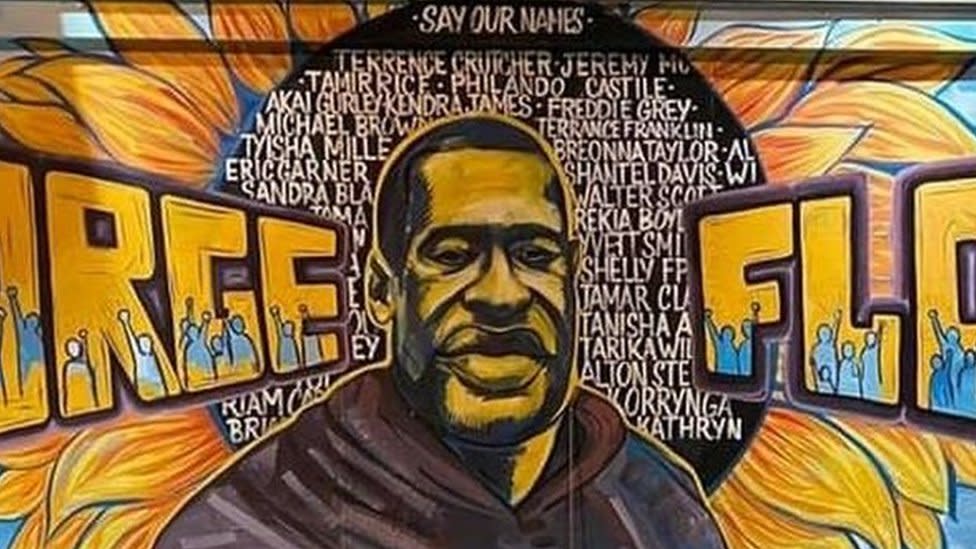 The death of George Floyd has propelled the names of others who died in police custody into the spotlight, years after their passing. For some bereaved relatives long fighting for justice that focus can be welcome, but it’s still painful.

Floyd’s face looks across the square in Minneapolis that’s become a monument to his death.

In front of it, Angelique Negroni-Kearse stops to take a picture. She has travelled from New York, one of scores converging on the Upper Midwest city to mourn loved ones who died in police custody – and to demand justice.

Floyd’s face surveys the flowers and tributes laid below. Behind him, a list of names sits underneath the rallying cry heard on protests, t-shirts and timelines around the world: Say Our Names.

Names that have become known for reasons that no one would ever want to make their loved ones famous. Eric Garner. Tamir Rice. Breonna Taylor.

Names whose lives most of us know relatively little about. Sandra Bland. Alton Sterling. Philando Castile. Names whose deaths many of us have watched.

The name of Angelique’s husband isn’t among them.

Andrew Kearse died in 2017. Fifteen days after being released from prison, he was pulled over for a traffic violation in Schenectady, New York. He ran. A police officer chased him and handcuffed him. Kearse complained of pain in his leg as he was put in the back of a police car.

“Excuse me sir, excuse me sir,” Kearse says, gasping, on video released by the police department and uploaded to YouTube by his widow.

In 17 minutes, he pleaded for help dozens of times. Only after the car had arrived at the station, and some time after Kearse had lost consciousness, was an ambulance called. He’d had a heart attack, and died.

As Floyd’s name and image travelled around the world, propelled across nations and borders by the inexorable momentum of shares, likes and injustice, other names – other deaths – have travelled in his wake.

“People need to know what happened to Andrew,” Angelique told the BBC by phone from a Minneapolis hotel room.

“That’s why I pushed so much for him, for everybody to be his voice.

“We’re going to get paint and we’re going to paint his name on the floor. It might not be on the mural of… George Floyd, with everybody else.

“But I’m not letting nobody forget about Andrew.”

Emerald Garner sometimes wishes she could be forgotten.

“I don’t want any of this national attention. I don’t want people to recognise me in the street,” she told the BBC.

“I would like to just go and enjoy my day and not have people say: ‘You’re Eric Garner’s daughter, this is how I felt about the video.’

After Floyd’s death, there was an immediate, visible leap in the number of people talking about her dad and sharing his picture online. She was working when it happened.

“I just started to get a whole bunch of phone calls and emails like ‘Did you see this video?'” she said.

“I don’t watch police brutality videos because of what happened to my father. Everybody [was] trying to say [I] should reach out to the family.”

She said she doesn’t want to “bombard them” by asking them how they are because she knows the answer.

New police deaths bring renewed attention and resurface old trauma. Because of what happened to her dad – and her prominence – it also brings pressure. She keeps being asked for her view.

“It’s like rewinding the tape and just playing it back over and over again.”

“I’m upset like so many other people are upset,” Heather Schieder told the BBC.

An artist and illustrator from western New York, she maintains an Instagram account where she shares her work. Lately, much of it has been overtly anti-racist. Portraits of black victims of police violence sit alongside stylised images of protest and pleas for action.

“I’m half-Egyptian, so as a child there were times when I experienced a little taste of racism,” she said.

She is also a Catholic.

“My current church friends are empathetic and they want to… centre black voices and work to be anti-racist.

“But the circles which I was in before, which were more conservative, were very conservative actually.

“They are the ones who would say things like ‘all lives matter’ or just deny that it’s even a problem or they will victim shame or they will justify their own racism.”

Her work has resonated with hundreds of thousands of people online.

The first portrait was George Floyd, and it drew on tributes she read about, that were paid to him by friends and family.

“There are so many narratives that people put out there about a person, especially a black person killed by law enforcement. I just wanted to use the words of those who knew him.”

The 23-year-old was walking through the Denver, Colorado, suburb where he lived, returning home from a convenience store.

A 911 call reported a “suspicious person” matching his description. Police stopped him. A struggle ensued and, after being put in a chokehold and injected with ketamine, he died in hospital.

His death was reported in the local press. A handful of rallies were held in his name. But then his case was closed and the police officers involved in his arrest returned to work.

“It hurts because I honestly didn’t understand why Colorado wasn’t there for Elijah like they were there for George Floyd,” his mother, Sheneen McClain, told ABC News.

“Everybody’s screaming names now, but… last year it would have made a big difference.”

It was from social media that Heather learned what happened to Elijah.

When she drew him, she printed his own words behind him – words captured on police body cameras after he was stopped.

My name is Elijah McClain. I was just going home. I’m an introvert. I’m just different.

“I watch people respond to those pieces of art in a way that is painful to them,” Heather said.

Singer Janelle Monae shared the McClain piece, and said she would never be over what happened to him.

“I know that my piece of art was probably a source of pain,” said Heather. “It’s just a bittersweet thing to watch the art do its job.”

Without social media, there’s no way to get these messages out and raise awareness for victims of police brutality, she added.

As Heather and others have helped to amplify the terrible details of Elijah McClain’s death online, and thousands have turned out on protests offline, pressure has mounted on authorities to act.

A month before the first anniversary of Elijah’s death, more than 4.5 million people have signed a petition demanding justice.

Colorado governor Jared Polis has appointed a special prosecutor to review what happened. Aurora police have banned the chokehold used to restrain McClain. New rules say officers must intercede if they see a colleague using excessive force. And police must themselves observe a person acting suspiciously before stopping them.

In July, one of the officers involved in the arrest was fired. Colleagues had sent him images re-enacting the chokehold which preceded McClain’s death. Two others were fired, and a fourth resigned.

Victims’ families are themselves using social media to try and join the dots between hashtags and lasting legislative change.

“Right now I think that social media is everything,” Emerald told the BBC.

“Because we can’t do anything right now. The world is on shutdown. We needed this national attention to get national change.”

The two women – aided by a clutch of Democratic lawmakers including Warren, her Senate colleague Kirsten Gillibrand and the congresswoman Ayanna Pressley, as well as Warren’s 2.4 million Instagram followers – are advocating for the introduction of legislation named for their loved ones.

The Eric Garner Act, which criminalises the use of chokeholds by police officers resulting in injury or death, passed both houses in the state of New York within a fortnight of George Floyd’s death.

The Andrew Kearse Act, signed into state law less than two weeks later, requires law enforcement officers to seek medical care for people in their custody who require it. Should they fail to, they can be held liable in civil court.

Proposed federal legislation was formally introduced in Washington by Senator Warren and Congresswoman Pressley on 19 June.

“This bill would help ensure accountability by holding officers who refuse medical care to those in their custody criminally liable for their inaction.”

“George Floyd and Eric Garner should be alive,” Senator Gillibrand said. “I will fight alongside my colleagues to pass this legislation and institute meaningful change that can no longer wait.”

“We have to lean on the Republicans for them to vote on the bill,” Emerald told the BBC.

“These laws are specifically to take out the bad cops. The time is now.”

Back in Minneapolis, Angelique is looking ahead to the march that took place the day after I spoke to her.

On the morning we speak, family and friends of those who died in police custody, from across the US, were heading to Minneapolis to remember, to grieve and to demand change.

“There’s so many of us that don’t have a voice and people don’t know about their loved ones, so they started calling each and every family members out here from all over the country.

“Nobody understands unless you have gone through the situation. All of us can relate to each and every one of our pain.”

One family lost a man shot 17 times, another one was shot 70 times, she said.

“They have to pass these laws, because enough is enough. We don’t want another family to be in this group.”

That night, yards from where George Floyd was killed, her husband’s name was painted on the road.

“Andrew Kearse is finally being heard from NYC to Minnesota,” Angelique wrote on Twitter a few days later.

“Andrew I told you I will never give up.

“I will get you justice.”

His name lives on with the others.