On the Upper East Side of Manhattan, it was chandeliers, a Tiffany bracelet and a vintage velvet chair with silver-colored rams’ heads. In Jackson Heights in Queens, it was a Korean wedding chest, and in Park Slope in Brooklyn, a giant stiletto chair with a purple zebra pattern.

All of these, remarkably, were free.

They were just a few of the items that have been found discarded on the stoops or streets of New York City over the past year, a byproduct of the pandemic that has amounted to such an abundance of valuable trash that some are calling it “The Golden Age of Free Stuff.”

The bonanza of freebies has prompted New Yorkers to prowl the city every day, combing through trash as if they were panning for gold, even at the risk of carrying bedbugs home.

“Look at this!” exclaimed Sonia Izak, after spotting a chair with a missing leg as she walked around her block on the Upper East Side on a recent frigid evening. She lifted the bottom to look for a label.

“Look, literally, it’s a West Elm! This looks very clean,” she said. “It’s in perfect condition except for the leg. They could probably order this from the company.”

Looking through other people’s trash and dragging away used objects isn’t new. But what has come to be known as “stooping,” or more recently, “trash stalking,” has become so widespread since the start of the pandemic that several Instagram accounts devoted to it have attracted thousands of followers and transformed what used to be a niche activity into a phenomenon.

Early on, many of the items found discarded, according to regular sidewalk shoppers, appeared to be from New Yorkers leaving the city, at least temporarily, as the outbreak grew worse. But over time, cooped up New Yorkers are seemingly going through an extended spring cleaning, yielding a windfall of unwanted stuff.

Instagram accounts post dozens of photos of discarded items sent each day by passers-by or “stoopers” (aficionados are called “super stoopers”). The more coveted items, including dressers with marble tops or a grand piano, cause a minor frenzy as people rush to get their hands on them.

The discards also sometimes reflect the demographics of the neighborhoods where they were found.

The velvet chair with rams’ heads on the Upper East Side was in fairly good condition; similar ones are selling online for over $1,000. A Japanese-style four-panel screen showing red-crested cranes was spotted in front of the United Nations headquarters, prompting speculation that it had belonged to a diplomat.

Then there are more functional pieces like kitchen sinks, ovens, tables, beds and sofas, some of them looking quite new.

But eclectic would be a more accurate description of the collection of unwanted goods often found abandoned.

A piano made of dark wood tossed out in Alphabet City in Manhattan. A bowling ball (with a leather case) available in Clinton Hill in Brooklyn. A terrifying-looking dollhouse and an equally nightmare-inducing portrait of a family of cats were up for grabs on the Upper West Side of Manhattan. One resident even left a pet turtle out on their stoop. (It has since found a new home.)

“I don’t see the amount of stuff on the street diminishing at all, it just seems to be increasing,” said Jessica Wolff, 36, who works in sustainable fashion and runs @stoopinginqueens on Instagram. She started the account in the summer of 2019 and had about 250 followers. Now she has over 10,000.

Some of those prowling the streets in search of possible gems appear motivated by frugality.

“If there is something you’d spend $400 on Wayfair on my feed, you’ll save yourself $400,” said Ms. Wolff, recalling a family that recently found a butcher block countertop from Home Depot.

Another major driver, simply put, is boredom. Stooping has given people a creative outlet as well as an opportunity to get out of the house. “I have a lot of people who used to think that going through trash was disgusting but who now see the value,” Ms. Wolff said. “The pandemic made this trendy. It’s cool now.”

Domarc Dayondon, 34, says he was one of those people. He changed his mind after a friend moved to the city last year from South Carolina and found an expensive couch and a wooden coffee table, both of them in good shape.

“In the beginning I was like, ‘Dude, that’s trash,’” he said. “But then, I was like, ‘Whoa, am I the only one that’s spending money going to Ikea to buy a cheap coffee table?’”

He started following various social media accounts on stooping, and quickly got addicted to it, likening it to playing “Pokémon Go” in which “you’re going on an adventure and seeing if you get rewarded.”

A recent find was a Chinese dresser made of teak, with the inside papered over with, at least to him, mysterious-looking inscriptions. “At first I was scared it was cursed, but there’s no ghost that’s popped out so far,” said Mr. Dayondon, who works in marketing for a financial company. (The inscriptions were later determined to be part of a 14th-century Chinese classic, “Romance of the Three Kingdoms.”)

He has also gotten a table, a lamp and a “wooden liquor bar thingy,” which he cleaned and sanded. He has been busy replacing the Ikea furniture in his one-bedroom apartment in Astoria, Queens, with his finds.

“It’s just a very slippery slope and I’m getting bogged down with furniture that I don’t need,” he said. He contacted Ms. Wolff to ask her: “Is there a stooping A. A.? Because I might need one.”

On a recent evening on the Upper East Side, Ms. Izak and P.J. Gach braved the cold to go “trash stalking,” a term Ms. Gach, a writer, coined after starting another Instagram account, @nycfreeatthecurb, in December. The two became friends over an ottoman that was being tossed out, and then a little later, over vintage hats that Ms. Izak had spotted.

“I flew over there,” Ms. Gach said. “Ended up taking the hats, a lampshade, and a backgammon set.” Another time, she found a silver Tiffany bracelet with the signature heart tag.

Ms. Izak, a former accountant in a real estate company, recalled being horrified at the sight of doormen chopping furniture up in her neighborhood to make it easier for sanitation trucks to haul away. She found a chair curved like a sleigh, newly upholstered, made of wood and vintage leather. She uploaded the photo onto her account and sat in the chair in the cold until a man arrived and took it away. “I saved it from the ax!” she said.

Perhaps the most popular Instagram account for abandoned goods is @stoopingnyc, which has 130,000 followers and is run by a couple who prefer to shield their identities. They are credited with coming up with the term “stooping.”

What stoopers and trash-stalkers say is most gratifying are “stooping successes” — when items are rescued and repaired, their before-and-after photos posted on Instagram.

One popular success story was a Korean wedding chest found in Jackson Heights. After it was fixed, it looked like it could be part of an advertisement for an upscale shop.

“Every day the city reveals another piece of beauty that needs to be adopted,” Ms. Izak said. “There is such a sense of satisfaction knowing that they can be given to people who need it.”

Wed Feb 24 , 2021
The first week of the abbreviated boys swim season is in the books. It wasn’t exactly a monumental week in the standings with winter weather leading to cancellations for a majority of meets this past week, but there were still some notable results throughout the state that resonated in the […] 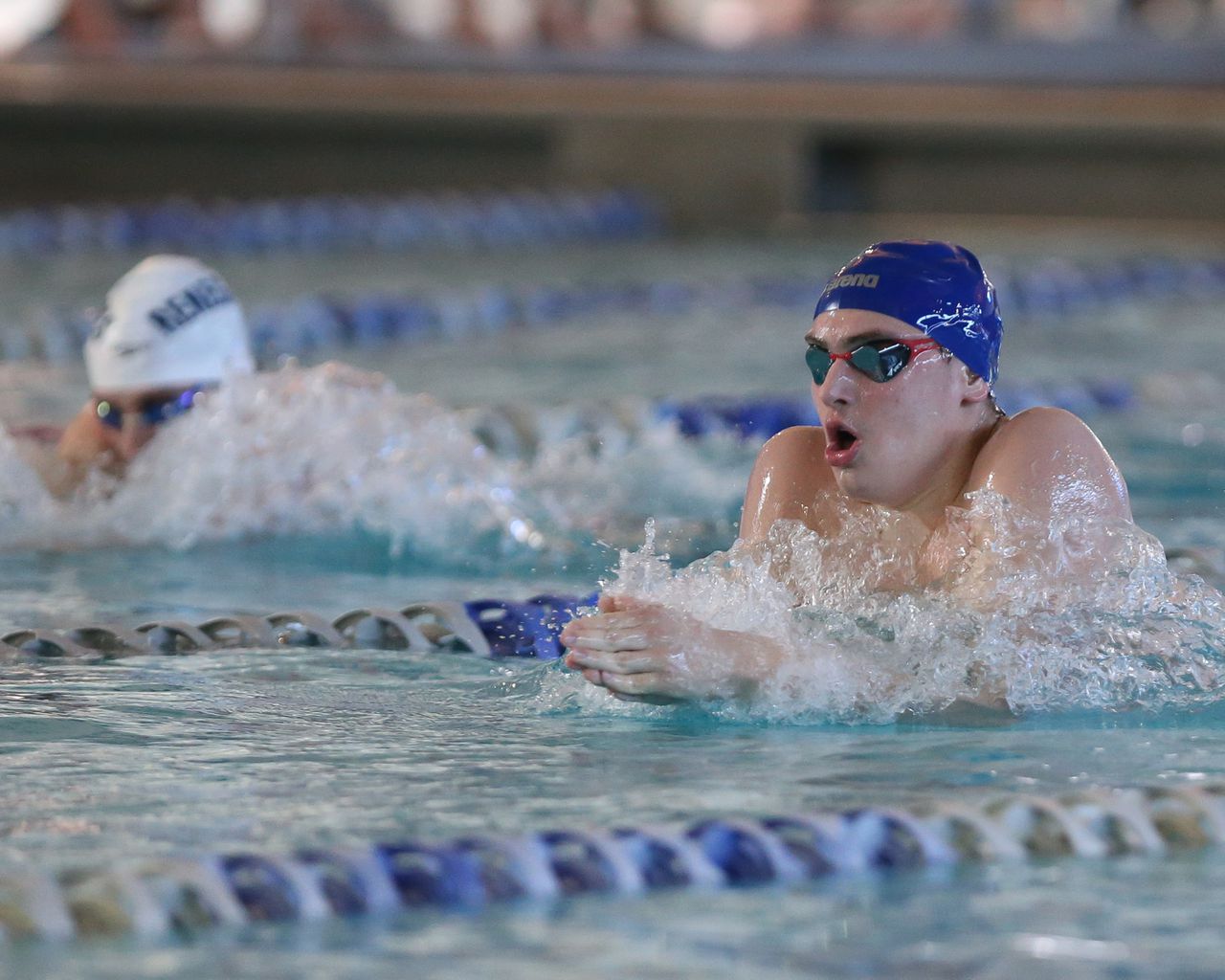