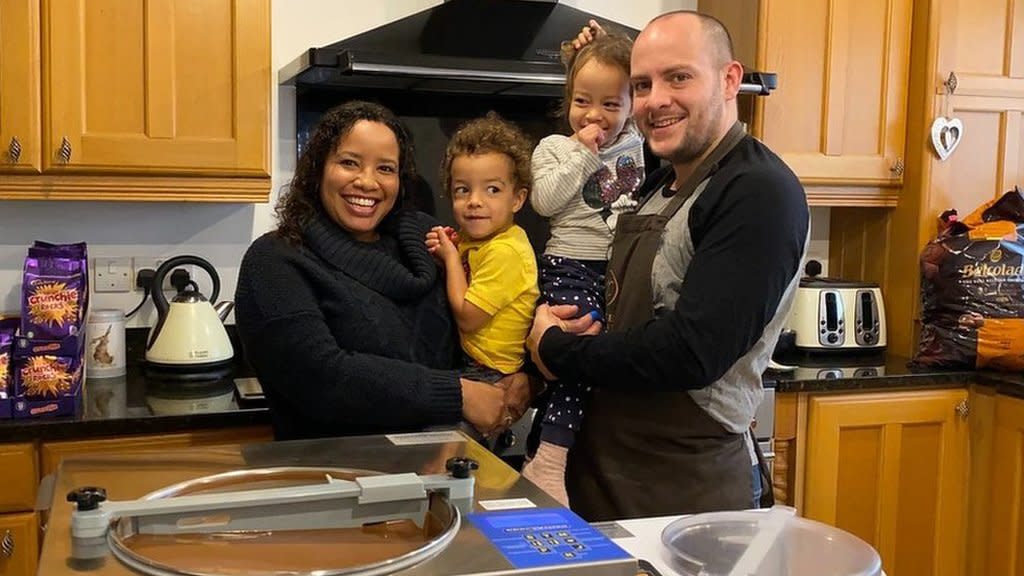 As part of our CEO Secrets series, which invites business leaders to share their advice, we are focusing on start-ups that have launched during lockdown. Each week we will look at a different type of entrepreneur. This week, we hear from fathers balancing a new business with childcare.

A consignment of 300kg of chocolate in an industrial container arrives at the house of Keith Tiplady, 35, in Leicester.

He moves hundreds of packs of pure chocolate pellets to a dedicated room in his house, where he also stores 1.5km of ribbon.

This is the “new normal” for Keith, who is now a chocolatier.

Until Covid-19 struck, he was a project manager with Triumph Motorcycles. But in April he was furloughed and later he was made redundant.

In the short term he had his wife’s income to rely on. She works full-time for the NHS. But the cost of childcare for their three-year-old twins was more than their mortgage, so something had to change.

Keith decided to look after the twins himself, while also setting up a business from home.

His entrepreneurial wife ran a bakery business in the evenings from their kitchen. Keith had always been fascinated by her chocolate-tempering machine, which she used to make decorative curls for cakes.

The machine melts chocolate pellets (known as callets) at controlled temperatures, before allowing the mixture to set solid.

Keith experimented with things his wife hadn’t tried, like chocolate moulds. Before he knew it he was creating ganache and caramel-filled, Belgian chocolates. And so his start-up, Indulgent Chocolates, was born.

During the spring lockdown, he set up “walking markets” for local entrepreneurs like himself, where people sell from stalls in their driveway, garden or garage. He also found success selling the chocolates online. People were buying them as gifts to be posted out to teachers, or for birthdays in lockdown.

Keith of course had to combine chocolate making with childcare. “In between making chocolates I’m reading stories with them and playing games, then I wash my hands and get back to work,” he says. “In a way I’m lucky they are twins, they play really well with each other.”

The business is generating more money now as corporate clients put in orders – hence the 300kg consignment of chocolate.

“If this business scales up it will allow me to live a normal life again,” he says, “and I won’t have to worry about affording Christmas presents.”

However, he also now faces a dilemma. He’s had interest from employers that could lead to a new role similar to his old job.

His wife remains supportive, though she would prefer him to find secure paid employment again. Then again, she also enjoys testing his latest creations in the kitchen.

Kavin Wadhar, 36, from London, quit his corporate job with a FTSE 100 company in February. The father-of-two says he had “an entrepreneurial itch to scratch”.

He comes from a family of teachers and he’d been dreaming of an educational app after reading a fact that shocked him.

“Children only spend 20% of their waking hours in school, so parents actually have a lot of power to shape, mould and educate their child, coaching moments if you like,” says Kavin.

His product is called KidCoachApp. It guides parents through five-minute conversations, designed to expand their children’s minds, and promote soft skills and emotional wellbeing.

There are questions like: How would you explain computers to Julius Caesar? What would the world be like today if dinosaurs were still alive?

The app was informed partly by his experience with his own family. He has children aged four and two, as well as many nephews and nieces.

He felt he was having too many “snatched conversations that felt transactional”, along the lines of, “What did you have for lunch today? Who did you play with at school?”

Although Kavin didn’t intend to launch his app in a pandemic, he thinks the timing is actually good for him. “I see this as a tailwind, not a headwind, because in lockdown parents are discovering life in a lower gear and they appreciate family time more.”

He even thinks that having his children at home while developing the business has been beneficial, bringing mental health benefits.

“Being an entrepreneur is hard and there is something incredibly stress relieving about being able to nip down and play with the kids for five minutes in the kitchen. It can make you more focused and productive knowing you have the lovely reward of bathtime.”

His advice to other dads is not to be intimidated by the typical image of an entrepreneur as a bold 20-something with nothing to lose.

“As an older person with a young family you have lots of advantages. You have business and life experience and a network to call upon – take confidence in this.”

Thomas Parkes, 51, from Bristol, had a different child-related issue to contend with during lockdown – a teenage son at a loose end, whom he feared was losing his way in life.

These trips were cancelled during lockdown. He was able to access a few support grants, but he knew his main business was in peril.

However, he also spotted a gap in the market.

He sensed that “staycations” were becoming more popular due to the same travel restrictions that were ruining his business. He also saw that there was an increased demand for campervans and tents.

From his adventure holidays, he knew all about a special kind of tent that sits on top of your vehicle.

“It’s popular on safaris,” explains Thomas, “so you don’t get eaten by lions at night.”

Thomas set up a side business called ADV Roof Tents to start selling these products, which retail from £1,200, sourcing bespoke versions from China.

At the same time he realised his son Oliver was struggling.

A low point was when he turned 18 in April and couldn’t go to the pub with his mates to celebrate. He also had to deal with his A-Level exams being cancelled. Although he got good grades, he decided not to apply to university.

However, he struggled to find any work, so reluctantly he agreed to help out his dad selling tents.

Oliver’s input would prove crucial to the new enterprise’s success, because he brought skills his dad didn’t have.

Every batch of tents that has been shipped over has quickly sold out. This new revenue stream is allowing the overall business to survive.

After four months of helping his dad out, Oliver has finally landed a job in a warehouse, which he’ll use to save some money. Thomas thinks that is no coincidence. Work experience with his dad gave him a renewed sense of purpose.

“There’s lots of criticism of kids partying [during coronavirus], but I feel sorry for my son’s generation. The social side of life is dead for them,” says Thomas. “This period is going to affect them for the rest of their lives, it’s in their psyche.”

As a dad and entrepreneur, he was just happy he could do something to help out.