Four of the year’s best picture books have waterways—real, metaphorical, man-made—that wind through them, taking young readers on empathetic journeys of imagination. In “Birrarung Wilam” (Candlewick, 40 pages, $17.99), the waterway is a real one, Australia’s Yarra River, which gathers itself from tributaries far inland and runs through the city of Melbourne to the sea. The text of this exceptional book, by Aunty Joy Murphy and Andrew Kelly, has an incantatory magic, mingling English and the Aboriginal language of Woiwurrung: “As ngua rises, turning clouds over the distant city red . . . Birrarung begins its long winding path down to palem warreen.” What do all these words mean? Children will be able to guess from what they see in Lisa Kennedy’s evocative and rough-feeling paintings (see above). They can also check the glossary at the back. This is a marvel for reading aloud, a dreamlike sojourn through a distinctive riverine ecology.

The chattering, churning, whirling waters of Jordan Scott’s autobiographical picture book “I Talk Like a River” (Holiday House, 40 pages, $18.99) exist both inside and outside its young narrator, a boy who suffers from a debilitating stutter. “At school, I hide in the back of the class. I hope I don’t have to talk,” he tells us. “When my teacher asks me a question, all my classmates turn and look.” In sublime and poignant paintings, Sydney Smith shows the child’s struggle, his misery and shame—and then the glorious, sun-dappled afternoon when his father uses an example from nature to transform the boy’s understanding of himself: “I talk like a river.”

With enigmatic black-and-white illustrations, “The Wanderer” (Levine Querido, 96 pages, $21.99) takes readers on a gorgeous, wordless odyssey from one side of the world to another. Peter Van den Ende’s intricate drawings follow a little paper boat as it travels through oceans and seas teeming with wonders: undulating monsters, playful mermen, and aquatic creatures that resemble elephants, cheetahs and medieval jesters. Wandering, the vessel moves beneath starry skies, passing ice floes and oil rigs until, at last, it enters the waters of a moonlit canal, where a mysterious passenger disembarks. Given the absence of text, the book may seem accessible to readers of any age, but its sophistication makes it best suited to those over the age of 8.

Rivers unfurl like pretty ribbons across distant landscapes in “If You Come to Earth” (Chronicle, 80 pages, $18.99), a beautiful and quirky picture book by Sophie Blackall that’s styled as a child’s letter to a visitor from outer space. “There are more than seven billion people on Earth,” the narrator explains. “You can’t see our thoughts, but sometimes we show our feelings on our faces.” The illustrations for these musings have all the humor and delicacy that make Ms. Blackall’s work so distinctive (see left): wry lines and marzipan hues in tableaux that abound in seek-and-find interest. With an innocent as narrator—“Some things are part of nature. Some things are made by people”—this open-hearted book exalts the commonplace, making ordinary things seem remarkable.

Rivers aren’t a big feature of the year’s best illustrated chapter books, but water, ice and snow do figure in “The Silver Arrow” (Little, Brown, 259 pages, $16.99), a sparkling fantasy adventure story by Lev Grossman, with pictures by Tracy Nishamura Bishop. When an 11-year-old girl receives the gift of a steam locomotive, she and her little brother soon find themselves thundering into the magical unknown. Become conductors, they acquire train carriages—some filled with books, some with candy—and punch the tickets of chatty animal passengers. Jaunty and wise, “The Silver Arrow” makes for a particularly fine read-aloud.

When J.K. Rowling began posting chapters of an original fairytale online this summer, she invited children confined by the pandemic to submit illustrations for it. Thirty-four pictures by young artists (see right) are featured in the handsome bound edition of “The Ickabog” (Scholastic, 305 pages, $26.99), a rollicking morality tale by one of our era’s most assured storytellers. In the land of Cornucopia, two wicked courtiers accrue power and riches by exaggerating the menace of a legendary monster known as the Ickabog. With the populace terrorized, suppressed and taxed to the point of poverty, two young friends embark on a quest to find and reveal the truth about the monster and set the kingdom to rights.

In a real-life story of terror and poverty—but also of resourcefulness and art—the writer and illustrator Uri Shulevitz remembers his wartime childhood in “Chance” (FSG, 329 pages, $19.99). To escape the Nazi onslaught of 1939, Mr. Shulevitz’s parents fled with him from Poland to the Soviet Union. He was 4. Without papers and under suspicion, the family was sent to a labor camp near the Arctic Circle; later they were able to move to the bleak environs of Soviet Turkestan before making their way westward. This marvelous book is enriched by the author’s drawings, photos and juvenilia and informed by a spirit of humane straightforwardness that feels—given the subject, given the epoch—like a tonic.

In an enthralling and original memoir for teen readers, Daniel Nayeri tells of a dislocated boyhood in “Everything Sad Is Untrue” (Levine Querido, 356 pages, $17.99). His narrative shifts back and forth in time; he jolts from the sacred to the profane and from the earnest to the comical; he weaves together awkward middle-school moments in modern-day Oklahoma and episodes from ancient Persian lore and his own family history. A chronicle of Mr. Nayeri’s experience as a refugee—he fled Iran at night with his mother and sister—it’s also a meditation on the untrustworthy nature of memory and an ode to the valor of his mother.

Frances Hardinge explores the dark temptations of power in “Deeplight” (Amulet, 419 pages, $19.99), a young-adult fantasy adventure set in a fictional archipelago still reverberating from its Götterdämmerung. In that conflict, monster-gods had torn one another to pieces in the deepest ocean. All that remains of the leviathans are god-fragments, “godware,” that people scavenge and sell for their supernatural qualities. A teenage boy, Hark, and his domineering friend, Jelt, deal in these black-market relics, but when a smuggling scheme goes wrong, Hark gets sold into indentured servitude. Things turn sinister indeed when the boys find the still-beating heart of a dead god, an object that has the power not only to heal but to transform.

Candace Fleming delves into the life of one of the 20th century’s most celebrated and controversial figures in “The Rise and Fall of Charles Lindbergh” (Schwartz & Wade, 319 pages, $18.99), an engrossing biography of the aviator who in 1927 became the first person to fly solo across the Atlantic. We see the price that global fame exacted from “Lucky Lindy”: needy crowds, aggressive paparazzi and, after his marriage to the writer Anne Morrow, the kidnapping and murder of the couple’s infant son. Ms. Fleming shows Lindbergh’s restless, resourceful energy but also his political naiveté and fatal susceptibility to Nazism. Readers will be left with a nuanced understanding of this “chilly, exacting” and accomplished man.

Fri Dec 11 , 2020
ALBUQUERQUE, N.M. (KRQE) – Controversy is brewing over a huge chunk of land in the middle of Albuquerque. Not all neighbors are on board with a sprawling plan to transform farmland off Rio Grande into a park that’s been decades in the making. Read full habitat rehab plan The city used […] 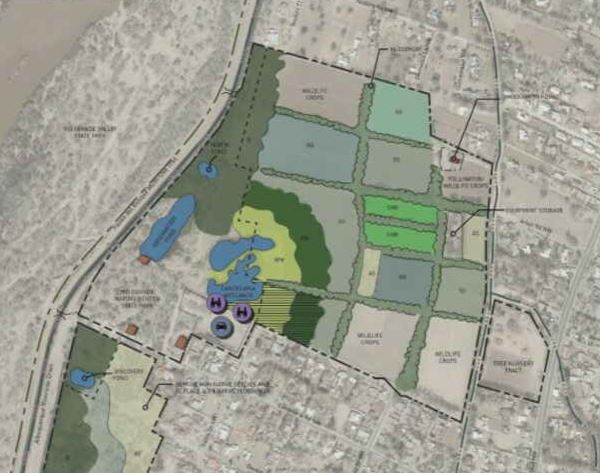