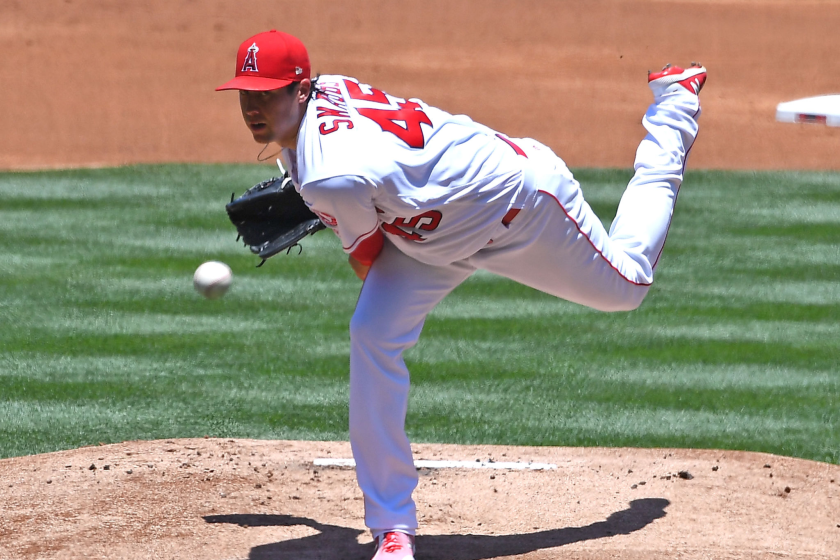 The word hangs in the air like a curveball that doesn’t break — “others.”

That particular six-letter combination appeared seven times in an affidavit in support of a criminal complaint filed against Eric Kay, the former Angels communications director, charged Friday with fentanyl distribution in connection with the overdose death of pitcher Tyler Skaggs.

The term surfaced again in a news release by the U.S. Attorney’s Office for the Northern District of Texas.

The word “others” is an ominous presence in these documents, raising the possibility that one of the most tragic episodes in Angels history could be darker than anyone imagines.

The affidavit by a Drug Enforcement Administration special agent described how “Kay, [Skaggs], and others would refer to these pills as ‘blues’ or ‘blue boys’ because they were blue in color.”

The news release contended the DEA “determined that Mr. Kay allegedly regularly dealt the blue M/30 pills — dubbed ‘blue boys’ — to Mr. Skaggs and to others, [doling] out the pills at the stadium where they worked.”

The charge against Kay, 45, looked as if it was an inevitability since October, when the well-liked, longtime Angels employee was identified as the source of the tainted drugs that killed the 27-year-old Skaggs. That didn’t make Friday any less sad.

But there is more than heartbreak over the lives affected. The new details evoked a sickening feeling over what could be revealed in the coming days, weeks and months.

Who are the “others”? Are they also Angels players? Was Skaggs’ death a result of a systemic problem that existed or exists within the organization?

DEA special agent Geoffrey Lindenberg’s seven-page affidavit detailed a text message exchange between Skaggs and Kay on the afternoon of the pitcher’s death.

Their electronic correspondence resumed near midnight, when Skaggs texted Kay his room number.

“Based on my training and experience,” Lindenberg’s affidavit read, “I believe [Skaggs] and Kay were discussing drugs, specifically in this case, blue 30 milligram oxycodone pills.”

The casualness of their messages indicated that wasn’t the first time Kay provided drugs for Skaggs. Lindenberg said he was able to confirm as much.

“During the course of this investigation, I learned that [Skaggs] and Kay had a history of narcotics transactions, including several exchanges wherein Kay acquired oxycodone pills for [Skaggs] and others from Kay’s source(s) and distributed these pills to [Skaggs] and others,” the affidavit said.

There’s that word again, “others.”

If the Angels have confirmed the existence of “others” or discovered their identities, they aren’t sharing the details. The statement they released Friday created the impression they were treating this more like a liability problem than a potential organizational drug scourge.

In addition to cooperating with law enforcement and Major League Baseball, the Angels said they hired a former federal prosecutor to conduct an independent investigation.

“We learned that there was unacceptable behavior inconsistent with our code of conduct, and we took steps to address it,” their statement read. “Our investigation also confirmed that no one in management was aware, or informed, of any employee providing opioids to any player, nor that Tyler was using opioids.”

The point about management’s lack of knowledge looked like a preemptive counter against a wrongful death lawsuit that could be filed by Skaggs’ family.

Meanwhile, Joe Maddon, hired as the Angels manager last October, sounded like he wouldn’t even entertain the possibility that Skaggs was the only drug user on the team.

“Honestly, I have not been a part of this investigation whatsoever,” Maddon said in an online news conference. “I’m as aware of it as you are.”

Maddon’s time with the Angels never overlapped with Skaggs’, but as the manager, didn’t he want to know what was going on in his clubhouse, if such a problem existed?

“Trust me,” Maddon said. “I know what’s going on in my clubhouse.”

He mentioned how he made it a point to speak to Andrew Heaney, who considered Skaggs his best friend.

But Maddon sounded less certain when asked how confident he was that any drug issues have been eradicated.

“I would hope so,” Maddon said. “I’m not an expert, but I don’t recognize any kind of issues right now.”

Maddon was smart to speak as carefully as he did, considering a disclaimer Lindenberg made in his affidavit.

“Since the affidavit is being submitted for the limited purpose of securing an arrest warrant,” the document read, “I have not included every fact known to me concerning this investigation.”