The major indices followed Monday’s raucous rally with a tamer, flatter Tuesday. The Dow Jones Industrial Average declined 0.6% off its record high to 29,783, while the Nasdaq Composite slipped by a thin 0.2% to 11,899.

But the relative calm belied a number of exciting developments over the past 24 hours.

One of the market’s most anticipated initial public offerings (IPOs) is one step closer to happening, as vacation rental marketplace Airbnb filed its S-1 – an important precursor to an eventual offering.

And Tesla (TSLA, +8.2%) shot higher following Monday night’s announcement that it would join the S&P 500 Index.

Wedbush analyst Daniel Ives called the development “a major feather in the cap for the Tesla bulls after much agonizing around not getting into the S&P 500 in early September.” It’s a complicated move, too – funds benchmarked to the index will have to make billions of dollars’ worth of trades to get the requisite amount of Tesla exposure.

Other action in the stock market today: 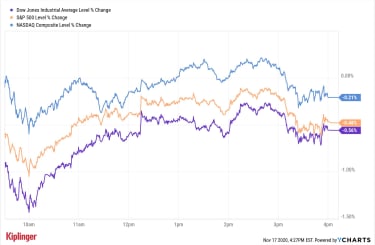 What Has Warren Buffett Been Up To?

However, George Soros said Tuesday he would keep selling Soros Fund Management’s investment in PLTR, which he said was made “at a time when the negative social consequences of big data were less understood.”

But the biggest “get” from Monday’s 13F dump was the latest treasure trove from Warren Buffett.

The Oracle of Omaha’s Berkshire Hathaway (BRK.B) holding company filed its 13F for the quarter ended Sept. 30, 2020 and revealed yet another busy quarter. While Buffett continued to whittle away at a number of positions, as he did in Q1 and Q2, he appeared much more optimistic, buying up 10 stocks – including six new positions.

Investors can scour the entire Berkshire Hathaway equity portfolio for a precise look into how Buffett and his lieutenants were positioned heading into 2020’s final stanza. However, if you just want to catch up on what Uncle Warren has been up to lately, we’ve wrapped up Warren Buffett’s recent buys and sells here.

Mass Rollout Bringing 900 Hotels onto Maestro PMS Browser Version 5.5 in 2020 at No Cost to Clients