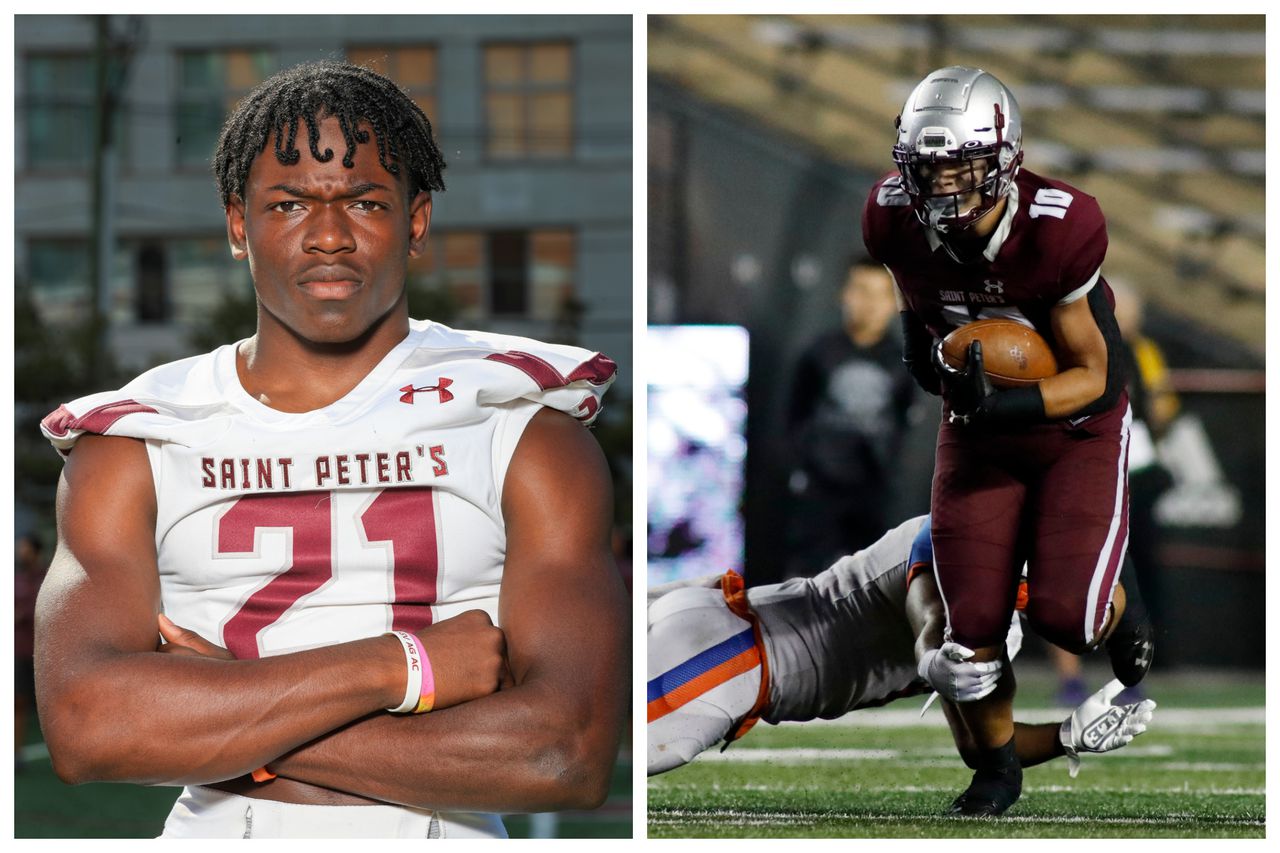 As Jordan Campbell was getting recruited this summer by Sacred Heart, the St. Peter’s Prep cornerback was doing some recruiting of his own, encouraging the coaches to take a look at teammate Ethan Rodriguez as well.

“Before I committed, Ethan wanted to get that Sacred Heart offer too,” said Campbell. “I was on the coach heavy, sending him Ethan’s film.”

Those recruiting efforts – both by school and player – paid off. On Wednesday, Campbell, a defensive back from Union, and Rodriguez, an edge rusher from West New York, both signed their national letters of intent to play at Sacred Heart on the first day of the early National Signing period.

A third former St. Peter’s Prep defensive back, GJ Mazzella, verbally committed to Sacred Heart during the summer, but did not sign a letter of intent. The recruiting status of Mazzella, who did a post-graduate year at St. Thomas Moore in Conn. this fall, is currently unknown. The next signing period is in February.

Rodriguez said he knew about Campbell from playing against him in recreation and then freshman football. But it was when Rodriguez transferred from St. Joseph (Montvale) to St. Peter’s Prep before his junior season that their bond really grew.

“We’re really close, really close-knit,” Rodriguez said. “Ever since I transferred in (to St. Peter’s Prep), we’ve really bonded on and off the field.When he committed, he was really interested in me going with him.

“I just feel like our chemistry has been really good, playing with Jordan for two years. I can’t wait to get back on the field with him.”

Both Rodriguez and Campbell were named to the Super Football Conference United Red All-Division Defense team this fall. The 6-foot-1, 215-pound Rodriguez earned All-Non-Public Second Team Defense honors this season, posting 22 tackles and 5 1/2 sacks in six games for the Marauders. The 5-foot-9, 170-pound Campbell had 21 tackles, 1 1/2 sacks and an interception on defense and also returned punts.

The year before, Rodriguez, Campbell and Mazzella were all key cogs in the Marauders’ Non-Public Group 4 championship team, which finished ranked No. 1 in the state. Rodriguez had 25 tackles and 2 1/2 sacks on defense, while also rushing for 471 yards and seven touchdowns. Campbell recorded 28 tackles and Mazzella added 60 tackles, four sacks and two interceptions.

While each experienced plenty of success at St. Peter’s Prep, both Campbell and Rodriguez are ready and eager to continue it at Sacred Heart.

“I think about that almost every day when I think about being committed,” Campbell said. “Being able to play with my guys that I played with in high school, it will really make our bond stronger than it already is right now.

“We talk every day about playing as freshmen, coming in, making a huge impact and just learning the plays and getting ready to work.”

OTHER SIGNING DAY NEWS FROM AROUND THE COUNTY

Union City RB Zahir Abdus-Salaam signed his letter of intent to play at Western Michigan in a small ceremony at Passaic Boxing Gym.

In just six games, Abdus-Salaam ran for 715 yards and 12 touchdowns on 114 carries. He also returned two punts for touchdowns, caught eight passes for 102 yards and a TD, and made 34 tackles on defense.

Abdus-Salaam verbally committed to Western Michigan in April after a junior season which saw him run for 1,222 yards and 12 touchdowns.

Bullock will head to Blacksburg, VA as one of the most decorated quarterbacks in Marauders history. A two-time First Team All-State Offense selection by NJ.com, Bullock threw for 814 yards and and 12 touchdowns and ran for 306 yards and six TDs in six games this year. As a junior, he led St. Peter’s Prep to a Non-Public, Group 4 championship, throwing for 2,274 yards and 26 touchdowns, while adding 480 yards and six TDs rushing.

Bullock verbally committed to Virginia Tech in June, selecting the ACC school over offers from Rutgers, Boston College, Syracuse, UCLA, Duke and others.

St. Peter’s Prep defensive lineman George Rooks remains uncommitted at the conclusion of the early signing period. The 4-star prospect, ranked the No. 4 prospect in the state by 247Sports, is reportedly down to Penn State, Boston College and Michigan. Rooks earned First Team All-State Defense honors by NJ.com after posting 41 tackles and eight sacks in six games for the Marauders.