The heist movie, set in 1950s Detroit, was filmed under strict COVID protocols

When “No Sudden Move” finished filming last Thursday at the Sagano Motel in Pontiac, it was more moving than your typical wrap day on a movie set.

“Spontaneously, I actually got very weepy,” says Ed Solomon, the screenwriter of the Steven Soderbergh-directed heist movie, which is set in Detroit in the 1950s. “It was incredibly emotional. It was like, ‘Oh my God, we actually made it to the end!’”

Ed Solomon on the set of “No Sudden Move.” (Photo: Twitter)

Completing any movie is an accomplishment that takes the cooperation and teamwork of hundreds of parties. But “No Sudden Move,” which filmed in and around Metro Detroit the last six weeks, was especially rewarding, its creators say, considering it was shot in the middle of the raging COVID-19 pandemic under strict health protocols which included rigid testing, its cast and crew living in quarantine and all parties involved sacrificing for the common goal of crossing the finish line safely and successfully.

“The requirements created a kind of a bond and a camaraderie where you didn’t want to be the one to ruin it for everyone else. It created a sense of tightness among everybody,” says Solomon, whose writing credits include “Men in Black,” “Charlie’s Angels” and the “Bill & Ted” series. “I had a headache one day, which turned out to be just from dehydration. But I bolted from set and went and got a test the second I felt it. I was like, ‘I do not want to be the person that shuts this thing down,’ especially when everyone is here with the common purpose of making something good, getting completed and honoring the city it’s being made in.”

“No Sudden Move” is the biggest movie to film in Michigan since the plug was pulled on the state’s film incentive program in 2015. It stars Don Cheadle, Benicio del Toro, Jon Hamm, David Harbour, Ray Liotta, Kieran Culkin and more, and is helmed by Oscar-winner Soderbergh (“Traffic,” the “Oceans” movies), who partially filmed 1998’s “Out of Sight” in and around Detroit. No release date is set, but it’s slated to hit HBO Max in 2021.

The film’s story revolves around a bumbled heist and is set against a racially divided Detroit, but key plot elements are being kept under wraps.

“It’s set in the ’50s and it’s a crime film, but the MacGuffin that’s at the center of the plot is an actual thing that was happening in the auto industry at that point,” Soderbergh told the News at 2019’s Toronto International Film Festival.

At that time, the film was being eyed for a springtime 2020 shoot but wasn’t yet a go. Last December, Soderbergh traveled to Detroit to do location scouting with a group that included Solomon and executive producer Julie M. Anderson.

They were considering shooting in Cleveland and taking advantage of Ohio’s film incentive programs and doing exterior shots in Detroit, “but I think (Soderbergh) felt very quickly on that scouting trip that we have to make it here,” says Anderson, who has worked with Soderbergh on seven previous films, dating back to 2002’s “Solaris.”

“We show off a lot of the city, and it’s really woven into the fabric of the story,” Anderson says. “Could you do it elsewhere? You could, and yes, there’s the cost of lost incentives. But (Soderbergh) definitely feels it was worth the tradeoff, and I think he was right.”

“No Sudden Move” was set for an April 1 start date when, two weeks prior to the start of production, COVID-19 shut everything down and left everything up in the air, especially the fate of large-scale Hollywood productions.

Things didn’t pick back up until June when Soderbergh — who enjoys making movies with self-imposed limitations (he shot 2018’s “Unsane” and 2019’s “High Flying Bird” on an iPhone) — called Anderson with the idea of making the film as an experiment of sorts.

“His original idea was to make the movie as a case study, figuring it all out as we go, stopping and starting along the way. And that became too much to really undertake, and would have been fiscally really challenging,” Anderson says. “It’s a period movie, it was too big to do that kind of experimental thing with. But that’s his approach.”

They reconvened with a late September start date in mind, but the reality of shooting a movie safely during a pandemic was still a concern.

Soderbergh, having made the 2011 virus thriller “Contagion,” had cultivated relationships with some of the world’s leading epidemiologists, including the Detroit-bred Larry Brilliant, the former University of Michigan professor who received his M.D. from Wayne State University. Brilliant connected Soderbergh with Wayne State’s president who recommended Dr. Phil Levy, who served as the film’s health safety supervisor, and helped  set forth a set of guidelines for cast and crew to follow, including a pared down set, frequent testing and the bubbling of personnel. A COVID safety department was present during production.

Cast and crew members stayed at downtown’s Element Hotel, and had nine of its 15 floors sectioned off for themselves, with a dedicated elevator and separate keycards for those floors. Those guests also had access to the Monarch Club, the rooftop bar that was partially set aside so those who were working on the movie had a place to unwind rather than leaving the hotel to go to an outside bar or restaurant.

Exterior view of the new ‘Element Detroit at the Metropolitan’ hotel in Detroit. The new Westin property is housed in Detroit’s historic Metropolitan Building, first opened in 1925. The neo-gothic architectural gem was rescued from demolition and and restored. (Photo: Andrew Potter for Element Detroit)

“We had very strict guidelines and we all followed them, and by following them we were actually able to do this incredible thing which is have hundreds of people working, sometimes in close quarters, and come through the other side successful,” says Solomon, who wrote “No Sudden Move” in summer 2019 after visiting Detroit that spring and studying the city’s Black Bottom and Paradise Valley neighborhoods. Solomon previously worked with Soderbergh on the HBO series “Mosaic.”

On set, challenges were of the logistical variety, says Anderson. Mask-wearing and social distancing was mandatory. Crews — who underwent daily health screenings and COVID testing every other day — were assigned to separate zones, and each zone had their own bathrooms and eating areas.

Shuttles were only allowed to transport two people at a time, which caused considerable slowdowns between basecamp and shooting locations. And lunch, which on a typical movie set is served in a buffet-style line, was dished out by workers from behind plexiglass into individual containers, which also ate up additional set time.

But the spirit of togetherness on set outweighed the annoyance of the constraints. “(Soderbergh) wasn’t annoyed by any of that. It was basically like, ‘this is what it takes to make a movie right now,’” Anderson says. “He was very accepting.”

The production was prepared for a shutdown as a result of positive tests and false positives and expected as much, Anderson says. (A spokesperson for the film says they’re unable to comment on test results, citing HIPAA laws.)

As the shoot neared the finish line, “we started feeling like we were playing Russian roulette,” says Solomon, who feared the production’s good luck was due to take a turn for the worse, especially with cases in Michigan spiking. “It was like a countdown, even on the last day. Nobody wanted to say, ‘hey we made it!’ because they didn’t want to jinx it.”

Production was bumped forward a day during the final week of shooting; Sunday, Nov. 8 became a work day so production could wrap Nov. 12 instead of on Friday the 13th. The end was greeted with a sense of jubilation, Solomon says, and it reinforced that work can be conducted, even in a pandemic, if people are smart about the choices they make.

“We got to actually complete a project in the city, and therefore bring a little bit of business into the city itself,” says Solomon, who drove to Detroit to work on the movie, since flying would have required a mandatory quarantine.

“We understood why we had to make sacrifices, and in the long run the sacrifices paid off,” he says. “To me, it was a very interesting personal example of seeing how we can keep things going if we are strict and we follow the lessons learned by science.”

And as long as everyone is deliberate in their actions and makes no sudden moves.

Out and About at WRAL.com

Tue Nov 17 , 2020
By Lora Lavigne, WRAL Durham reporter Durham, N.C. — Pop-up outdoor dining experiences are on the rise as restaurants continue to navigate through the pandemic. With cold winter weather on its way to the Triangle, one Durham business has gotten creative to keep customers coming. Unscripted Hotel has redone its […] 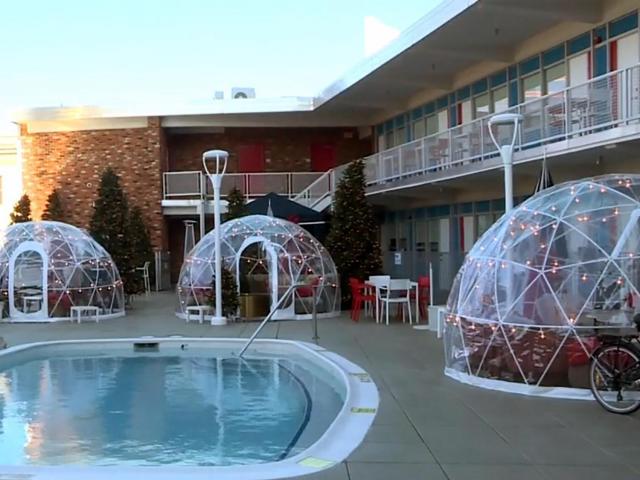