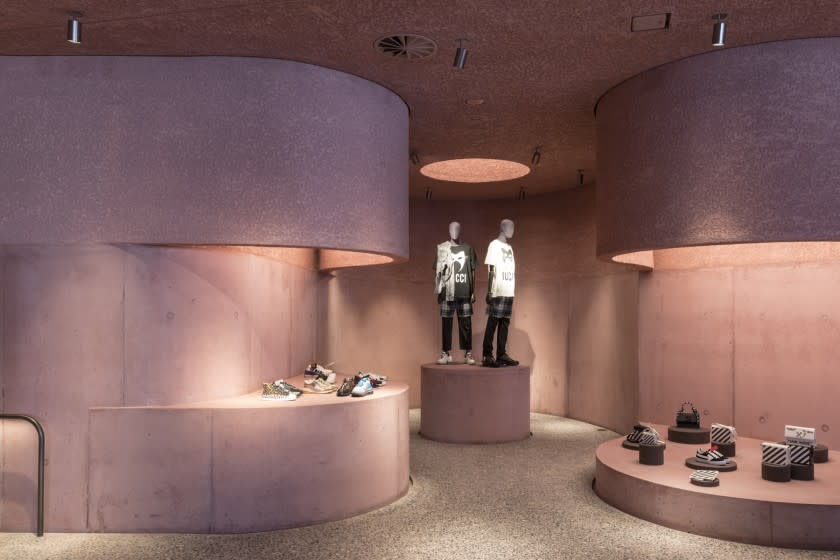 The retail landscape has been marred by the closures of well-known fashion stores as well as a high unemployment rate and the COVID-19 pandemic. Yet there are still bright spots when it comes to in-store shopping — such as L.A.’s the Webster, which has emerged as a sanctuary for style.

Magüis Sosa, a 32-year-old manager of online influencers, is one design-savvy fan who found refuge in the 11,000-square-foot store, anchoring a prime corner of the Beverly Center at Beverly and San Vicente boulevards in Los Angeles. The Webster opened at the start of the year before the pandemic hit California and has had to close twice because of COVID-19 safety restrictions and the unrest that swept L.A. this spring.

About her visit to the Webster in February, Sosa said, “I like quiet places especially for shopping.” She’s an admirer of the store’s tall ceilings and pink curved concrete walls designed by British architect David Adjaye, who has also conceived grand churches and stately museums. Of the store, Sosa said, “It’s peaceful.”

Amid the clothing, accessories, beauty and home items for women, men and children from Gucci, Off-White, Palm Angels, Heron Preston, Versace and other high-end brands, the highlight for Sosa was a spacious dressing room decorated with a row of rectangular mirrors, vertical bars of white light and vintage wallpaper printed with tan leaves on a peachy base. “It was like a dream-house closet,” said Sosa, who, like others, took an Instagram selfie in the flattering spot. “It’s a space you want to stay and try on more clothes.”

Sosa liked the Webster’s feminine-but-modern decor so much, she made a second visit soon after. “It’s kind of the first store that I’ve seen that is more than a retail, basic store,” she said. “It is a little more forward-thinking.”

That’s the intention of Laure Hériard Dubreuil, the Webster’s French founder and creative director. “We wanted to create our own landmark in Los Angeles,” she said on a tour of the store earlier this year. Just outside the Webster’s front door, a movie by filmmaker Kahlil Joseph plays on a screen nestled within the cantilevered facade. Below, a fountain soothes the ears with its flowing water. An orange blossom scent created especially for the Webster permeates the open interior, which has been sectioned into discrete coves and streamlined banquettes. “I wanted something disruptive, but at the same time, it’s reassuring as well,” she said.

With eight physical stores — the first of which opened in 2009 in Miami and the most recent two unveiled this year at the Beverly Center and inside Montecito’s Rosewood Miramar Beach resort — the Webster is proving that the key to retail in these modern unprecedented times lies in customers’ comfort and happiness. (The retailer also has a store at South Coast Plaza in Costa Mesa.)

Under Hériard Dubreuil’s discerning eye, which was sharpened while she worked in merchandising at Balenciaga and Yves Saint Laurent, the growing retailer sells a not-too-overwhelming selection of timeless items, including a number of designer exclusives.

After all, cocktails over Zoom might get flirty if you wear a Maisie Wilen pastel-swirled tank dress with silver chain straps ($650). A masked-up walk outside might look cooler in chunky Pierre Hardy sneakers tied with pink bandannas ($645) or a black Real Buy bucket hat printed with green scribbles by artist Trevor Andrew, a.k.a. GucciGhost ($72). For children, there’s an “I love Cali” T-shirt from the Webster’s own line. On the shirt the word “love” is substituted for a cute drawing of the company’s flamingo mascot surfing ($40).

The Webster’s L.A. store is also one of the first U.S. retailers to have Burberry’s animal kingdom-themed pop-up, which features large sculptures of monkeys, gorillas and birds of paradise along with exclusive editions of Burberry’s leather bags, silk scarves and jewelry. The pop-up at the Beverly Center is open through Sept. 17.

The store’s personalized customer service focuses on one-on-one appointments between clients and stylists. A big part of its business entails preparing consignment packages that stylists think their clients would like and sending them to their homes to try on at their convenience. Clients pay for what they keep. Hériard Dubreuil estimates that half of the Webster’s clients were already shopping by consignment before COVID-19.

“That’s why, for us, it made it less difficult to adapt to the new normal,” she said in a Zoom call from Corsica last month. “Everything that we’ve built during all these times, we managed to continue, and we developed the trust with our clients in building a safe haven. That was the goal for the Webster: [being a place] where you feel good, where you feel safe, where you feel that you are taken care of, and everything is curated for the clients.”

Under COVID-19 precautions, the Webster’s staff and guests are required to wear masks and respect the six-feet social distancing rule in the L.A. and Montecito stores. To control the flow in stores, shoppers are encouraged to make appointments. The stores are cleaned daily and sanitized between each client.

Since opening its doors to the public on Jan. 10, the L.A. store has had to close twice. Not long after receiving the celebrity seal of approval with visits from Dakota Fanning, Meek Mill, Jhené Aiko and Demi Moore, it was shuttered for eight weeks to comply with L.A. County’s shelter-at-home mandate. It reopened for curbside pickups and limited in-store shopping in May.

Later, the L.A. store closed again to repair damages from unrest during the protests sparked by George Floyd’s death in police custody. In support of Black Lives Matter, the Webster has pledged to add more Black designers and Black-owned brands. It also joined the Black in Fashion Council to advance Black individuals in the fashion and beauty industries.

Because it has a separate street entrance and valet, the store was able to launch for the third time on June 11. The Beverly Center and other indoor malls remain closed in L.A. “It has truly been an emotional roller coaster since opening,” Hériard Dubreuil said.

The Webster’s store at the Rosewood Miramar Beach opened in July. Designed by Stéphane Parmentier, with a giant block of onyx in the center used as a table, the 500-square-foot nook allows only three clients and one stylist at a time to shop for clothes, swimsuits and accessories from brands such as Chanel, Dior and Lisa Marie Fernandez. The boutique also offers in-room styling for hotel guests and Miramar Club members.

“Montecito and the estate itself are so beautiful and luxurious,” said Hériard Dubreuil, who has taken to the California lifestyle after moving to L.A. from New York with her husband, artist Aaron Young, and their two children last year.

Yet economic anxiety rears its head beyond the world of resorts. Hériard Dubreuil said she had already survived the Great Recession. “When I opened my first retail [store] in Miami, it was also when people said, ‘Retail is dead,’” she said. “We’ve always done it our way.”

Besides, she added, “Fashion, for those who love it, can be the ultimate escape, and more times than not, people buy a piece out of sheer inspiration for a time in the future.”