Well no … he is. And he’s recruiting names like Nick Kroll and Ike Barinholtz for bits about vaping through one’s genitals and having life-changing epiphanies in hell with the help of a Mark Wahlberg-stanning Satan. But beneath the lineup of “alt penises” and Rogen’s exaggerated stoner persona, there’s a strong desire to affect real change in the fight against a disease most people are still largely in the dark about.

Rogen’s Netflix special, Hilarity For Charity, dropped on the streaming platform two years ago. Named after the nonprofit he started with wife Lauren Miller – which now just goes by HFC – the organization’s goal is to raise money for Alzheimer’s research and in-home care. The special may be fans first encounter with Rogen’s passion project but HFC’s been around since 2012 and it’s raised over $13 million dollars for Alzheimer’s research in that time, awarding over 290,000 hours of in-home care relief to family caregivers through a specialized grant program.

As mind-blowing as those numbers might be, HFC had relatively humble (and personal) beginnings. Just a year after the comedian started dating his now-wife, Miller’s mother was diagnosed with early-onset Alzheimer’s. She was only 55-years old.

Miller had experienced the disease before – her grandfather was diagnosed when she was 12 and her grandmother lost her battle with it when Miller was in high school – but Rogen, who was just starting his movie career following the cancellation of Judd Apatow’s Freaks and Geeks, was a bit blindsided by it.

“Every time I visit my mother-in-law, I’m shocked that what I’m seeing is the result of this disease,” Rogen told InStyle in 2017. “Alzheimer’s is brutal. I mean, it’s associated with losing your memory, but you don’t just forget who people are; you also forget how to talk, how to eat, how to do everything. That’s hard to wrap your head around until you actually see it.”

Both Miller and Rogen struggled with how to help her mom for years. There was shame and stigma attached to the diagnosis that kept them from talking about it, and the lack of government funding meant a cure or even a therapeutic treatment for those suffering was basically non-existent. It wasn’t until a friend of theirs suggested they put on a variety show and donate the proceeds to Alzheimer’s organizations that they found a way to use something they both love – comedy – to benefit those in need.

Rogen would go on to star in films like Knocked Up, Superbad, and Pineapple Express as his fame grew. Miller, an actress, writer, and recently director of the Kristen Bell-starring comedy Like Father, would pop up in indie hits like Call For A Good Time. But both dedicated more and more energy to confronting the disease, especially as her mother’s condition worsened.

“Around the time when I was getting old enough and famous enough to actually understand that I should probably be using that fame to draw attention to something is around the time that all this started to happen,” Rogen told InStyle. “In [my] 20s, I was aware that other people were doing charitable things, but it was not on the forefront of what I was thinking about, nor did I have a cause or anything that I felt that strongly about, or would be able to intelligently talk about. So it really was a moment where this was happening in my personal life, and at the same time, I was like, ‘I could actually really help bring attention to this thing.’”

The duo launched Hilarity For Charity which has grown into a national non-profit and wellness initiative. Their goal isn’t just to raise money for Alzheimer’s research – though that’s the main priority and an incredible need in the space – but to also educate and support people facing this disease. That means creating grants to in-home care relief for family caregivers, people like Miller’s father who spent 15 years looking after her mother before her death in February of this year so that they can practice some self-care. A trip to the movies. A family vacation. A doctor’s appointment of their own. Small necessities that fall to the wayside when your full-time job becomes caring for a loved one who can’t eat on their own, who doesn’t recognize their surroundings or even remember themselves.

But HFC’s work isn’t just reactionary. The organization has expanded its reach, chartering new paths in the fight against Alzheimer’s by focusing on preemptive changes people can make that might stave off the worst effects of the illness.

Research shows that Alzheimer’s can reside in the brain decades before any physical effects manifest so Rogen and Miller are using their nonprofit in a more proactive way, crafting brain-health programs that teach younger generations (millennials like themselves) how to take care of their body in order to hopefully better their odds.

“When my mom was diagnosed, brain health was in a completely different space,” Miller told Refinery 29. “I was very aware of brain disease, but unaware of how to prevent brain disease.”

Along with caregiving tutorials and online support groups – which have become all the more important thanks to the current pandemic – HFC is also teaching people how to engage and enrich their brain, partnering with doctors and organizations to offer everything from articles and podcasts to short films to hammer home the importance of things like nutrition and cognitive fitness.

And yes, the work is important, but what’s even more impressive is how authentic Rogen’s approach to doing good has been. Instead of attaching his name to a charity he had no emotional ties to, the comedian has gone all-in on a mission he’s personally invested in, harnessing his talent for making people laugh with his signature brand of raunchy, good-natured humor to bring about change.

All those dick-vaping jokes are just a Trojan horse for his more essential work: beating Alzheimer’s, but instead of focusing on the dark and depressing subject matter, Rogen and Miller use their celebrity and their talented social circle to lighten the mood which, inevitably, leads to more support, more money, and more press.

Press around inventive charitable endeavors like their annual Halloween parties headlined by people like Snoop Dogg. Or Bar Mitzvahs for James Franco hosted by Miley Cyrus. Or weed-smoking adults-only carnivals with booths manned by names like Ilana Glazer, Ben Feldman, Josh Gad, and Casey Wilson. These parties are filled with over-the-top ridiculous levels of fun, but at their core, they’re about creating meaningful memories and actionable change when it comes to a truly devastating illness – at least for people like Superstore actor Feldman, whose mother suffers from the disease and who has helped organize events in the past.

“My mom is in a memory care place here in Los Angeles, but when she was a little more functioning, she’d come to these events with me,” Feldman told The Hollywood Reporter last year. “I have a video of my mom in a mosh pit dancing with weed glasses on to Seth and Snoop Dog rapping onstage. It’s the greatest video I’ve ever gotten of her.”

For his part, even though Rogen acknowledges the work HFC is doing is vital and often life-changing, he rarely shoulders that burden with any self-inflated sense of seriousness. He’s just as happy to host a guided meditation with Keegan-Michael Key to raise money as he is to speak on Capitol Hill and call out lawmakers who aren’t doing enough for Alzheimer’s research, as he did in 2014.

According to the National Institutes of Health, the federal government has allocated between six and 10 times more funds for cancer research and HIV/AIDS than Alzheimer’s despite the fact that Alzheimer’s kills more people than breast cancer and prostate cancer combined and that, by 2050, the disease will cost the U.S. an estimated 1.1 trillion dollars. When Rogen spoke in front of a committee, pleading for more funding to help manage and perhaps one-day cure the disease, only two senators stayed for his testimony. He addressed the slight, and how it points to a larger issue within Congress and our country later on Twitter.

So yes, Seth Rogen is a comedian who has a limitless supply of dick puns that he’s happy to wield against Alzheimer’s. He likes making people laugh and bringing some humor to a rather depressing diagnosis. He’s happy to use his brand of comedy to further that goal, to attach his name to all kinds of weird out-of-the-box fundraisers and events to direct the spotlight onto bigger issues.

But don’t think he doesn’t take this work seriously.

Wed Nov 18 , 2020
WASHINGTON (AP) — House Democrats nominated Nancy Pelosi on Wednesday as the speaker to lead them into Joe Biden’s presidency, but she’d be guiding a smaller and ideologically divided majority as she tries shepherding his agenda toward enactment. Democrats used a voice vote to make Pelosi, D-Calif., their choice to […] 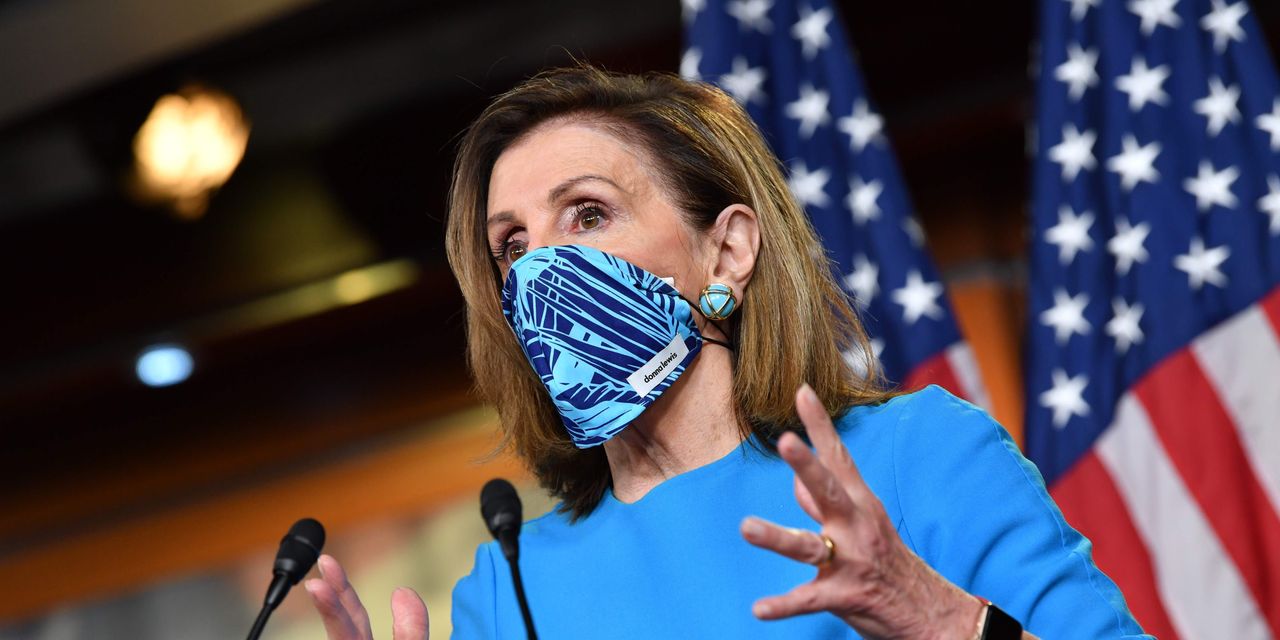