Second wave forecast to be more deadly than first

The Prime Minister is coming under pressure for a new lockdown. Downing Street is working privately on the assumption that the second wave of Covid-19 will be more deadly than the first – with the number of victims remaining high throughout winter. An internal analysis of the projected course is understood to show deaths peaking at a lower level than in the spring, but then remaining at this level for weeks or even months. Health Editor Laura Donnelly understands the projection has led to intense behind-the-scenes lobbying from Chief Scientific Adviser Sir Patrick Vallance for Boris Johnson to take more drastic action now. Separately, Sage has warned that all of England may be under Tier 3 restrictions by mid-December, scuppering hopes for a normal Christmas and with police chiefs warning that family gatherings that breach restrictions are liable to be “broken up”. Matt is away, but Blower has today’s political cartoon on the future of England’s tiers.

At first glance, the results of an Imperial College study tracking immune response to Covid make for grim reading. In many people, antibodies seem to decline rapidly. But while these findings are important, they are not all doom and gloom. Harry de Quetteville explains that antibodies might not be the only weapon our bodies have to defeat coronavirus.

Two children aged five and eight died and a baby was reported missing overnight after a migrant boat sank in the Channel yesterday. It was the third fatal accident involving a migrant vessel in the Channel in three months and the first incident involving the deaths of children. A man and woman also died when the small boat, packed with about 20 migrants, sank in strong winds two miles off the French coast. Home Affairs Editor Charles Hymas explains how traffickers, who charge up to £3,500 per place, only get their cut of the money when the boats are put to sea.

Having made the country a global laughing stock as a fictional TV reporter, he is an unlikely choice of ambassador. But 14 years after lampooning Kazakhstan in his infamous mockumentary, spoof character Borat has been enlisted by tourism chiefs to boost the country’s profile. With a sequel to the film released this week, authorities in the central Asian republic have adopted Borat’s catchphrase as a tourist slogan.

At a glance: More coronavirus headlines

Also in the news: Today’s other headlines

US election | Hackers briefly broke into Donald Trump’s campaign website last night – a week before election day. “This site was seized,” said a message that popped up on donaldjtrump.com. Hackers claimed to have confidential information on Mr Trump and his relatives. It came as latest voting shows Joe Biden’s lead widening. Follow our polls tracker.

France has warned its citizens to take extra security precautions in a number of Muslim-majority countries amid ongoing anger over President Emmanuel Macron’s staunch defence of the right to publish cartoons depicting the Prophet Mohammed. Read how French citizens in Indonesia, Bangladesh, Iraq and Mauritania are urged to exercise caution. View more world pictures in our daily gallery.

Wed Oct 28 , 2020
MANATEE COUNTY, FL — In the 2020 election, Manatee County voters will choose the winner of the Manatee Board of County Commissioners District 5 race. Write-in candidates Carol Ann Felts and Chris Gilbert challenge incumbent Republican Vanessa Baugh for the seat. How to vote As the Nov. 3 election approaches, […] 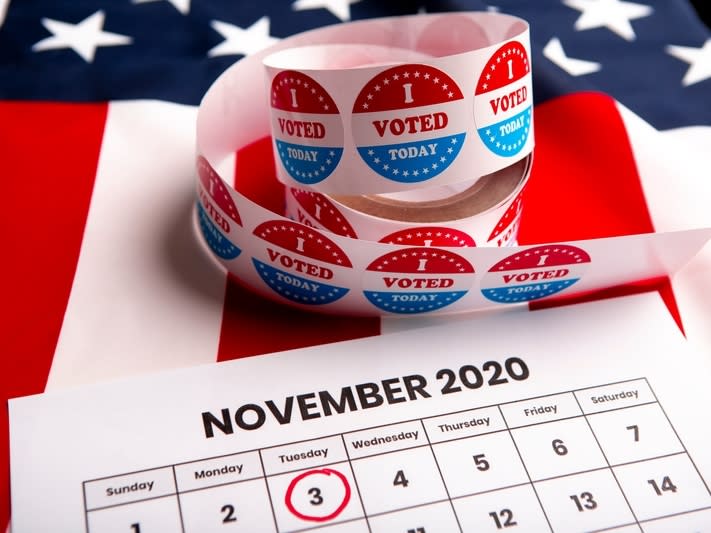