Actress Naya Rivera is presumed dead after going missing during a boat trip in Ventura County. The state and the University of California file separate lawsuits against the Trump administration. And a tired California mother envisioned a faster, healthier way to feed her daughter. Think Keurig, for babies.

It’s Arlene with all the news to know this Thursday.

But first, Downtown Disney reopened Thursday morning to throngs of visitors clamoring for some of that M-I-C-K-E-Y M-O-U-S-E feeling. What coronavirus?

In California brings you top stories and commentary from across the USA TODAY Network and beyond. Sign up here for weekday delivery right to your inbox.

Actress Naya Rivera, 33, is presumed dead after she disappeared from a rented boat at Lake Piru in Southern California. As of Thursday afternoon, search-and-rescue crews were still looking for her body.

Rivera, best known for her role as Santana Lopez in the Fox sitcom “Glee,” had arrived at the lake around 1 p.m. on Wednesday, said Capt. Eric Buschow, a spokesman for the Ventura County Sheriff’s Office. She rented a boat for herself and her 4-year-old son.

When she didn’t return when the boat was due, lake staff went looking for her and found the boat at around 4 p.m., with only the child aboard.

A Southern California native, Rivera was born and raised in the Santa Clarita Valley, approximately 20 miles from Lake Piru.

A different sort of wildfire season

The state also plans to hire more firefighters, because about half of the inmate hand crews that normally help fight fires are unavailable this year due to COVID-19 outbreaks in prisons.

That’ll substantially drive up costs since prison fire crew members earn between $2.90 and $5.12 per day.

The state Senate delays work as coronavirus cases soar while the Assembly goes on indefinite hiatus after six people who work there tested positive for the virus.

The University of California is suing the Trump administration over a new policy prohibiting international students from staying in the country if their classes are held solely online. “To UC’s international students, I say: ‘We support you and regret the additional chaos ICE’s action has caused,’ ” UC Board of Regents Chair John Pérez said in announcing the suit.

Harvard and MIT earlier this week announced similar suits. “The order came down without notice — its cruelty surpassed only by its recklessness,” Harvard President Larry Bacow wrote in a letter announcing the lawsuit.

In other education news, the state of California joined with four other states to sue the U.S. Department of Education for diverting money meant for K-12 public schools to private schools. The move could cost the Golden State $1.5 billion, state Attorney General Xavier Becerra said.

Joshua Tree National Park closed Thursday for two weeks, not due to the coronavirus, but because of aggressive bees.

Air quality in a wide swath of Southern California during the Fourth of July weekend was worse than in any year in the last decade. The likely culprits: personally detonated fireworks, and weather.

The newest season of the “The Bachelorette” may be filming at the La Quinta Resort & Club in La Quinta, which also hosted contestants from “Top Chef” in 2015.

Essential California details how “the worst prison health screw-up in state history” led to one of the nation’s worst coronavirus outbreaks.

A police investigation confirmed suicide was the cause of death of Robert Fuller, a Black man found hanging from a tree in a Palmdale. Fuller’s family had called for a deeper investigation following his death last month, saying said he was an upbeat person who wouldn’t have taken his own life and authorities had been too quick to call it a suicide.

Ventura County officials, on nearing a shortage of hospital beds: “The surge is upon us.”

Who says 28 years is too long to get housing built? Also, masks and Father Serra

A 755-unit development inches toward construction in Ventura County, just 28 years after the site was first targeted for large-scale residential development.

A decision on whether to remove a statue of Father Junipero Serra from outside Ventura City Hall was delayed due to technical glitches. Several other statues of the Spanish priest, who established missions up and down the state, have come down.

It was during a 3 a.m. feeding session, holding a crying baby in one arm while trying to prepare a bottle with the other, that Cara Armstrong had her a-ha moment:

“I just glanced up at my coffee maker and I had an epiphany. I said, ‘How can I have a coffee in under 30 seconds, Mia has to wait about 15 minutes for her bottle to be fully assembled?’ ” Armstrong said in “California by Design: Innovations,” a new show that looks at the Golden State’s design leaders. “It was in that moment that the idea for Baby Barista was born.”

The Baby Barista, which looks a bit like a sleek Keurig, is the result of years of sweat and effort by Armstrong and her team. It prepares carefully measured and mixed, temperature-controlled formula at the touch of a button. It’s not quite to market yet, but will be soon.

To take Armstrong’s dream to reality, she worked with RKS Design, a Thousand Oaks-designed firm started by former Xerox executive Ravi Sawhney. It’s expected to cost between $200 and $300, but could be lower if it’s combined with a subscription for formula packs.

I talked via email with Sawhney and Mike Elam, RKS’ director of product development, about the process for getting Baby Barista off the ground. Our conversation has been edited for length and clarity.

Q: When you first heard of the project, what most excited you?

A (M.E.): As the parent of a young child at the time, memories of what it was like to feed a newborn were still very fresh in my mind. I knew that if we could get it right, and design a product that really addressed the needs of new parents, it was going to be a product with huge potential. And I love a challenge like that!

Q: What are some of Baby Barista’s unique features? For instance, I understand you can get the bottle started from your phone, without leaving your bed, which sounds pretty cool to me.

A (M.E.): Making a bottle through the app was a nice little add-on! But the great thing about having an app is we can do things like set up bottle preferences for multiple kids — to make sure they’re all getting the right bottle — and track feeding patterns and nutrition, creating information that can be reviewed with your pediatrician.

Q: What aspects did you feel were important to include?

A (M.E.): In our research, we found things like speed, reliability, ease of cleaning and simple interface were the most important drivers for parents. So we really focused on how we could keep the system as simple and bullet-proof as possible, even creating a dumbed-down interface for when you’re leaving the feeding to a family member or babysitter.

Q: What is different about the formula Baby Barista produces, compared to microwaving (which is what I used to do when I babysat, eeks), stovetop preparation or just mixing with water and shaking?

A (M.E.): The alternative methods you describe leave two major threats to baby health: poor nutrition and scalding with hot liquids. Cara saw these issues all too often as an ER nurse. Baby Barista is designed to give the perfect bottle, every time. What’s more, Baby Barista can make you a bottle in less than 30 seconds, saving hours a day of prep and clean up for new parents (and babysitters!).

Q: How is Baby Barista different from other products on the market, like Baby Brezza?

We wanted to create a product that really focused on trackable nutrition and baby health, and to do that, we needed a more robust and reliable form of formula concentrate.

Q: Cara talks about this a-ha moment she had in her kitchen one day at 3 a.m. What do you say to people like her who have a moment, in terms of how to start when it comes to bringing a dream to reality?

A (R.K): Starting a new venture can seem overwhelming but can also be a rewarding experience. Finding a team that can help bring your vision to life is critical, and it is essential to understand that while inspiration is the catalyst, there is a lot of work that goes into turning the dream into a reality.  Also, it is vital to understand the product-market fit, which is something that we help entrepreneurs do.  We are here to help move you through design.

Fri Jul 10 , 2020
President Trump’s re-election bid has had a rough few weeks, with challenges coming from both his stewardship of the presidency and past personal controversies that may be catching up with him. Coronavirus is worsening in much of the country, he’s down in the polls, his response to the pandemic has […] 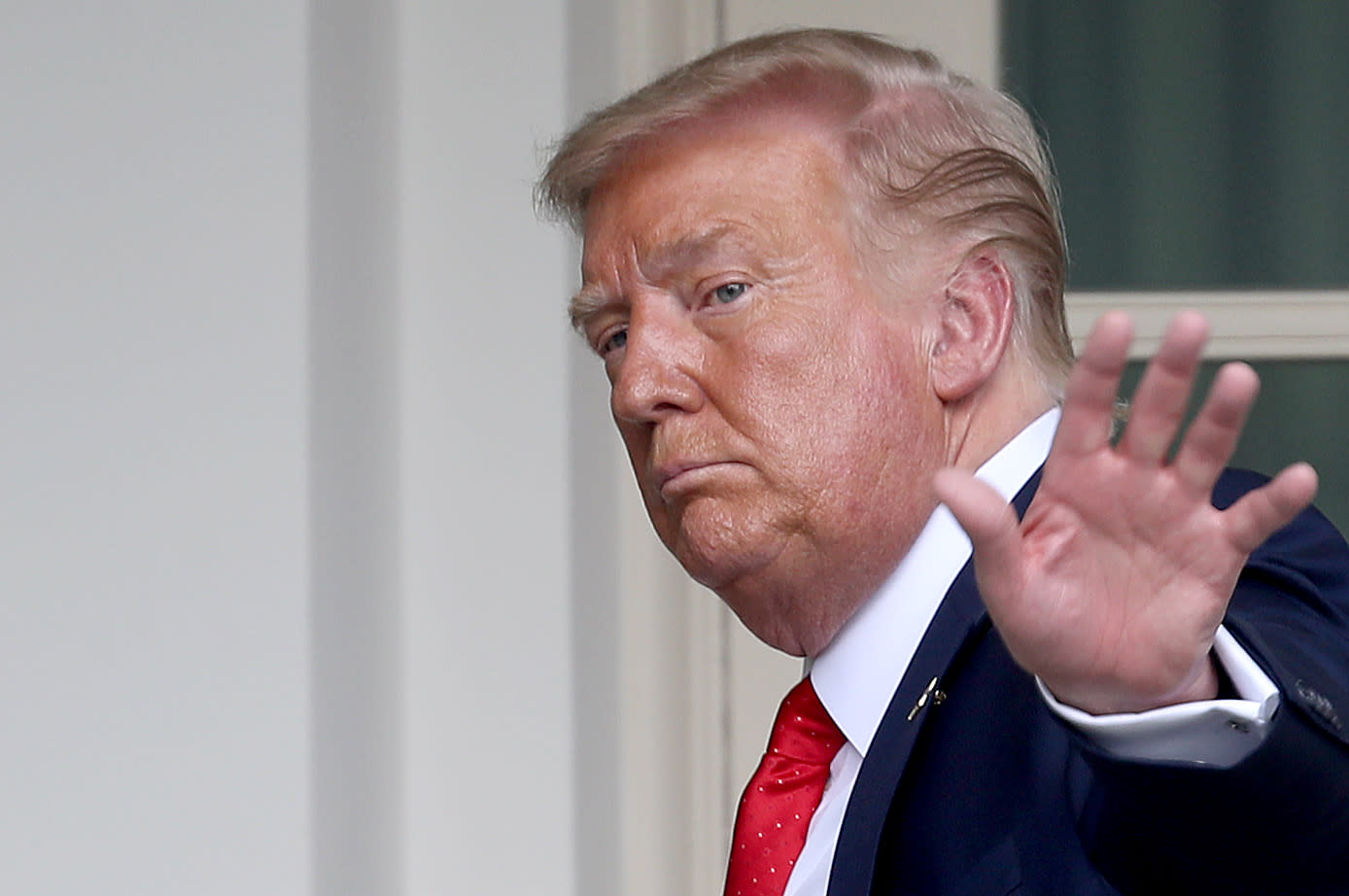