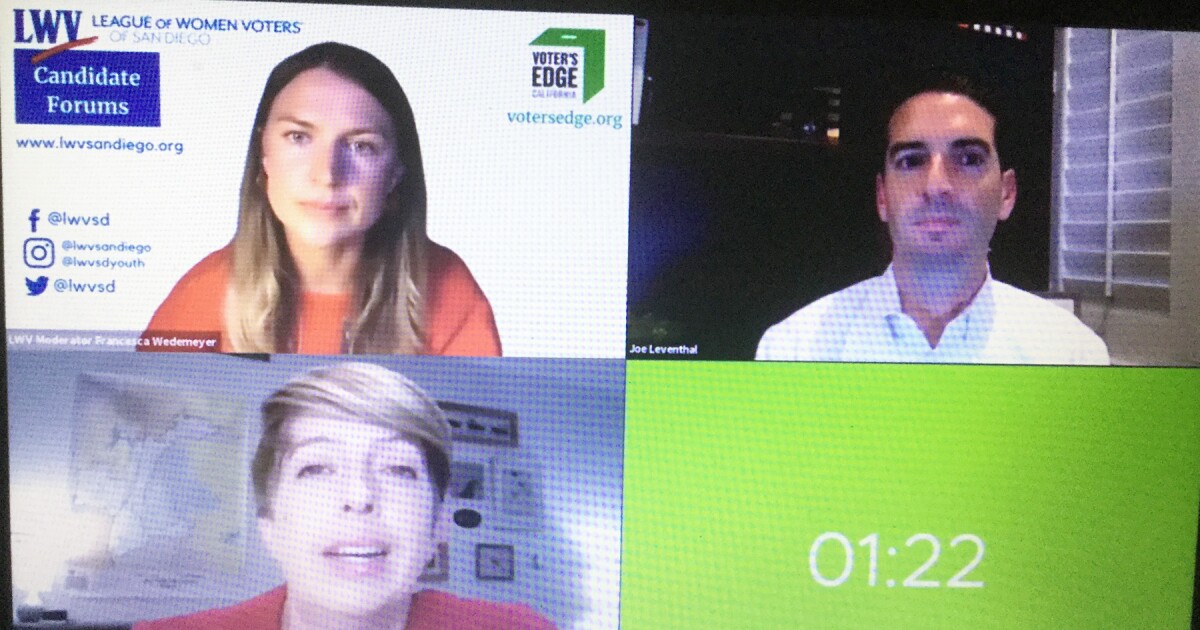 The online Sept. 24 event was moderated by the League of Women Voters of San Diego. The video can be viewed at lwvsandiego.org. San Diego City Council District 5 includes Rancho Bernardo, Carmel Mountain Ranch and Sabre Springs, along with the city’s other North Inland communities.

Joe Leventhal is a Torrey Highlands resident and Republican who has lived in District 5 for 15 years. He is an attorney and business owner who earned his bachelor’s degree from UC San Diego and juris doctorate from Georgetown University Law Center. His campaign website is at JoeForSanDiego.com.

Marni von Wilpert is a Scripps Ranch resident and Democrat who also grew up in that community. She is a deputy city attorney who earned her bachelor’s degree from UC Berkeley and juris doctorate from Fordham Law School. Her campaign website is at MarniForSanDiego.com.

In addition to their two-minute opening and closing remarks, the first-time candidates were given one minute to answer constituent-submitted questions on a wide range of topics.

“I am running to make sure every kid in every family in San Diego has the same opportunity for a bright future just like I did,” von Wilpert said. “To me, that means we take care of our city and our environment, keep our air clean and our water clean, make sure that we fight climate change to protect us from wildfires, which we see are getting worse every year and are threatening our communities.”

Von Wilpert added her goals also include finding “real solutions to our homelessness issue” and said there are not enough mental health and addiction treatment options. She also said housing affordability at all levels is an issue, as are good-paying jobs, especially in the science and biotech industries.

Leventhal said being a parent is one reason he is running for the council. “I’m really concerned about the direction our region is going,” he said. “I think there is a lack of strong leadership in the region. San Diego is getting known for kicking the can down the road and not addressing some of our largest challenges.”

Among issues Leventhal said he would focus on are the regional economy; the city budget, especially in light of it being “decimated” due to the pandemic; and making sure services such as libraries and recreation centers are not cut in response to the city’s financial situation. He also mentioned prioritizing road repairs over mass transit projects and supporting law enforcement.

When asked about their top priorities specific to District 5, Leventhal said roads, police and the economy. Von Wilpert said core services like public safety (police, fire and 911), traffic, road conditions and having “shovel-ready” city infrastructure projects when funding is available.

Regarding the city’s budget deficit, Leventhal said he would prioritize infrastructure investment since postponing road repairs, for example, will cost more “down the road.” In addition, since tourism is a key component to the city’s financial recovery, “making San Diego be viewed as the safest place to travel to,” he said.

Von Wilpert said the projected $300 million deficit due to “plummeting” tourism taxes mean the city must be positioned as a “safe destination.” In addition, city infrastructure projects have to be ready to go so when funding sources become available San Diego can be first in line to receive them.

Both questioned the region’s ability to have infrastructure ready to support the governor’s goal to ban new vehicle sales of gas-powered vehicles by 2035. Von Wilpert called it a “laudable” goal to improve air quality. Leventhal said he does not support its timeline and it “creates a real challenge” for vehicle affordability.

They also expressed concerns over the city’s decision to be an electricity provider through the Community Choice Aggregation program in light of the recent billing problems with its water department. However, since this is the path chosen, both pledged to do what they can to make the program successful.

Both also said community planning groups need to be strengthened and the city must provide more resources so members can have greater, not less, say about issues within their communities. Von Wilpert said residents “know our neighborhoods best” and promised to listen to her constituents. She said a more holistic approach is needed when reviewing changes proposed for communities. Leventhal said showing up at community meetings and supporting planning groups is important. He proposed having the boards assess stop lights and crosswalks within a half-mile of each school in order to learn what safety measures are needed.

The candidates both said public transit does not efficiently work for District 5. Leventhal said while some constituents can take a bus, the majority need to be able to drive, so keeping traffic moving is key. Von Wilpert said she tried using public transit, but as currently set up it is not very usable. “We need two solutions to this problem,” she said, explaining they are efficient public transit along with road improvements.

Increasing affordable housing at all pricing levels was another common goal for the candidates. Von Wilpert said she would like to see down payment assistance since that is the greatest hurdle, rather than the monthly mortgage payment, for first-time homeowners. Leventhal said government regulation is increasing the cost and mandates, such as requiring solar on new construction, along with in-lieu fees are inflating the price for home buyers.