BOSTON — New genetic data helps tell the story of how COVID-19 arrived in Massachusetts, exploded across a hotel conference center, wormed its way into a nursing home, repeatedly struck a homeless shelter, and contributed to the virus’ march around the globe.

The new research tracks several “superspreading events” that may help public officials decide which activities are safe and which are dangerous, said Dr. Jacob Lemieux, who helped lead the study, which was posted online Tuesday but has not yet undergone scientific peer review.

One of the superspreading events took place in late February at a conference of the biotech company Biogen, which specializes in treating neurological diseases.

About 200 people attended the company’s leadership meeting. More than 90 infections were traced to it in Massachusetts, and potentially as many as 20,000 worldwide, Lemieux said.

The attendees shook hands, exchanged pleasantries and sat together in the same room all day for two days, said Barry Bloom, an immunologist at the Harvard T.H. Chan School of Public Health. “With unknown amounts of ventilation,” added William Hanage, an epidemiologist at the same school, who was an author on the study. Both participated in a phone call with media Tuesday.

“The fact that this can happen is something we really need to take into account in the way that we choose to reopen society,” said Lemieux, a medical resident at Massachusetts General Hospital and a post-doctoral researcher at the Broad Institute, a genetics research center connected to Harvard University and the Massachusetts Institute of Technology.

Large, indoor events are probably not a good idea while most of the population remains vulnerable to infection, he said.

“I don’t think the message is, ‘We need indefinite lockdowns, everything has to be out-of-doors forever,'” he said. In some cases, risks can be reduced with mask-wearing, social distancing, testing and improved ventilation. But the study indicates the incredible toll that superspreading events can carry, and it offers some suggestions on how to limit the consequences of such events.

Coronavirus arrived by car and plane

The virus that causes COVID-19 arrived in the Boston area more than 80 separate ways.

One person brought it from Wuhan, China, in late January, the data suggests, but didn’t pass it to anyone else. A few more infected people arrived from Europe in early March, but again, didn’t seem to pass it on.

As spring began, dozens more carried it with them from Europe. Others brought it up from New York, a four-hour drive to the south. By April, most of the cases were locally transmitted, rather than imported, the research found.

As of Tuesday, 8,961 people in Massachusetts have died from COVID-19 and 102,205 have recovered, according to Johns Hopkins University.

The researchers sequenced and analyzed the genes of the viruses in 772 of the cases by Aug. 1, including all the confirmed cases from early March and others that resulted from two superspreading events.

By looking at small genetic changes that occur when the virus reproduces and is transmitted from person to person, researchers can track its movement.

The origins of the infections that hit the Biogen conference aren’t clear, even after  examining the genetics of 28 of the more than 90 infections directly tied to it, Lemieux said. The paper doesn’t identify the conference, but the dates and the number of infections tied to it match that of Biogen’s.

It’s possible that attendees brought it from Europe or elsewhere in the U.S. The employees who attended from the Boston area could have brought it into the Marriott Long Wharf, with its stunning views of Boston Harbor.

On Feb. 26, the day the conference started, there were only 53 confirmed cases of COVID-19 in the U.S. Companies were just beginning to cancel in-person conferences.

People tied to the conference appear to have spread the virus to Virginia, North Carolina and Texas, and to other countries including Australia, Sweden and Slovakia.

Lemieux said it’s impossible to come up with a perfect count from the data he and his colleagues examined. But, he said, “it is clear from many angles — whether looking at the Massachusetts data, state-level data for the United States, or global data — that the scale of this event is measured in tens of thousands of cases.”

Biogen had the misfortune to be the conference where superspreading occurred, but it could have happened at any meeting, Lemieux said. People simply didn’t know back then how contagious the virus was.

“There’s nothing special about this particular conference except the bad luck of clearly having at least one infected person indoors in a set of circumstances that led to onward transmission,” he said. “The conference was important, but COVID-19 was coming with or without it.”

In April, Biogen formed a consortium with Massachusetts General and the Broad to connect its employees who contracted COVID-19 to create a biobank of research samples.

“We never would have knowingly put anyone at risk,” Anna Robinson, a spokeswoman for Biogen said in a statement. “When we learned a number of our colleagues were ill, we did not know the cause was COVID-19, but we immediately notified public health authorities and took steps to limit the spread.”

People living or working in nursing homes and other long-term care facilities accounted for 22% of all confirmed COVID-19 cases through Aug. 1 and 64% of the 8,433 reported COVID-19-related deaths in Massachusetts to that date.

One nursing facility tested residents because it planned to relocate them to make room for COVID-19 patients released from a hospital. Administrators, Lemieux said, were shocked to learn about 80 residents and workers were already infected, with 90% linked to a single introduction in early April.

It’s not clear how so many people came to be infected within a few weeks or even less, he said, but “we consider it a superspreading event.”

By contrast, at a shelter run by Boston Health Care for the Homeless Program, the virus entered at least seven times, the research shows, including four that led to clusters of 20 or more infections each.

About half of those infections had the same genetic errors as the virus that spread from the Biogen conference, revealing a link between Boston’s biotech industry and the region’s homeless population.

“The virus spreads in communities up and down the socio-economic status in ways we don’t really understand,” said Harvard’s Hanage.

The research points out that superspreading events can have a profound effect on an outbreak. These events are somehow different than typical routes of transmission, though more study will be needed to better understand them, Hanage said.

People who are superspreaders may be fundamentally different. Or these cases could be a matter of opportunity, where someone who is particularly infectious ends up in a situation where they can pass the virus to many others. In South Korea, one man spread COVID-19 at five bars he visited in one evening, sparking a major outbreak.

“Hopefully, I have to say, superspreading events are going to remain rare,” Hanage said, “because we are hopefully not going to give the virus any opportunities to spread” like that.

RNC Speaker Kristi Noem Is a Master of COVID Delusion

Wed Aug 26 , 2020
Al Drago/Getty When South Dakota Gov. Kristi Noem addresses the Republican National Convention on Wednesday, the theme of the evening will be “Land of Heroes.” But whatever Noem says in her remarks, she will remain somebody who smilingly approved a gathering of nearly half a million people who were in […] 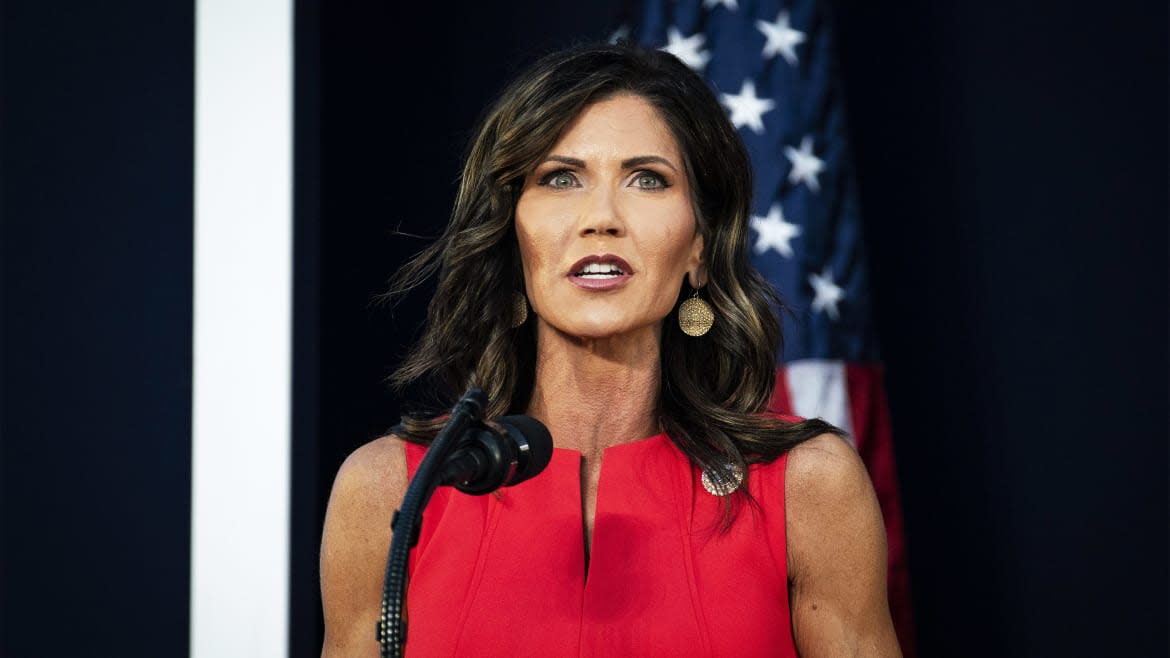