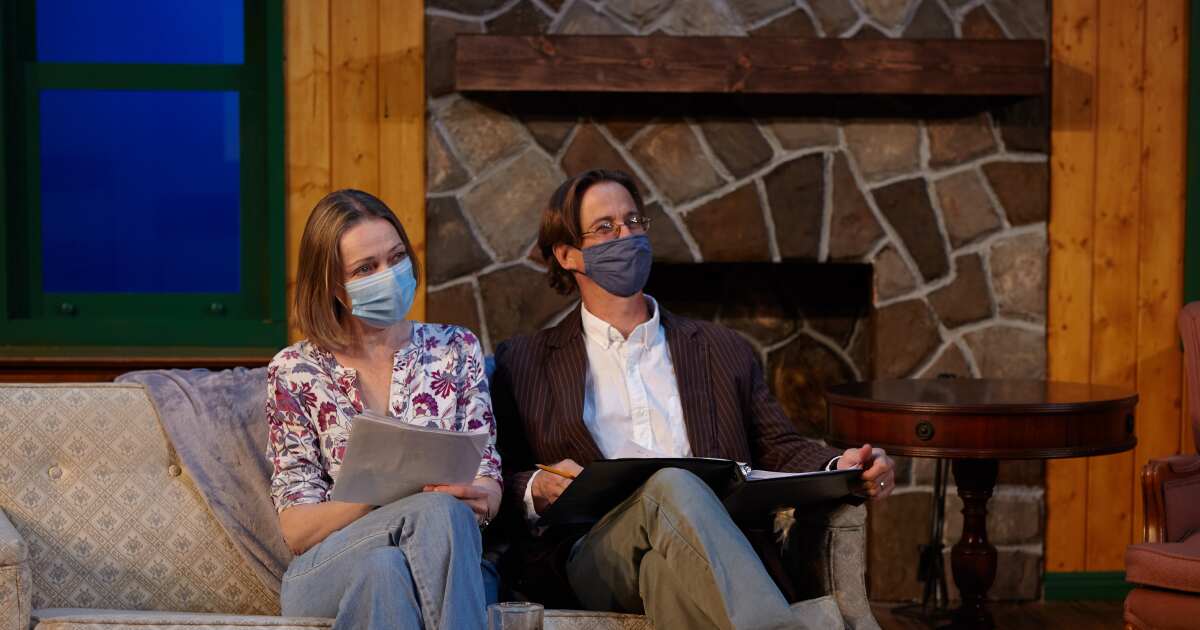 One of the biggest challenges theaters are facing these days in producing live, filmed or Zoom-based theater performances is trying to make the actors’ interactions believable with social distancing restrictions.

That isn’t a problem for North Coast Repertory Theatre’s “Same Time Next Year,” a two-character romance that stars actors Katie MacNichol and Bruce Turk, who are married in real life. While masks and other social distancing measures were strictly followed for rehearsals and filming days, the couple could safely interact up close, adding a layer of intimacy to the production.

Written by Bernard Slade, “Same Time Next Year” is a romantic comedy about the 25-year love affair between a couple who meet once a year at a hotel to renew the excitement of their original one-night stand. The production was directed by David Ellenstein and filmed by Aaron Rumley.

The production was filmed with scenery, lighting and costumes onstage at North Coast Rep and it will be available for streaming Oct. 21 through Nov. 15. Tickets are $34 per household and can be purchased at northcoastrep.org.

San Diego Repertory Theatre has filmed the second production of its revised 2020-21 season, Aaron Posner’s witty political drama “JQA,” which will be available for streaming Oct. 16 through Nov. 5.

“JQA” is the story of America’s sixth president John Quincy Adams and his impact on America. Similar in style to “Hamilton,” the show’s four-member cast is multiracial, with all four actors playing Adams and other White characters in the course of the show. The production stars Crystal Lucas-Perry, Larry Bates, Jesse Perez and Rosina Reynolds. Rep Artistic Director Sam Woodhouse, who also directs “JQA,” said the play is particularly timely during election season.

“The recent Democratic and Republican conventions made it clear how differently the two political parties look at the role of government in the lives of the American people. Playwright Aaron Posner asks us to consider what the Founding Fathers and their successors thought about what a government should do for its people,” Woodhouse said in a email.

Tickets are $35 per household and can be purchased at sdrep.org.

San Diego’s Blindspot Collective is prepping for the world premiere of an unusual live interactive audio play inspired by youth activism that will be presented in multiple locations around San Diego County beginning Oct. 17.

“Good Trouble” is a verbatim audio play, using the actual words of local activists based on interviews with more than 40 community organizers who are creating “good trouble” through protests. Audience members will gather at pre-planned locations around San Diego for socially distanced communal “performances,” where they will listen together to the audio play with their cellphones and headsets and then afterward will be encouraged to participate in a communal protest. Face coverings will be required.

Audience members will register online and then be given the address for the 10 pop-up performances at locations that include downtown San Diego, Linda Vista, Chula Vista, Pacific Beach, National City and Balboa Park. A national performance is planned on the run’s closing day, Nov. 1. All performances are free. Register at blindspot.ticketleap.com.

His widow, playwright Marian Blair Hollingsworth, said she and their four children are planning a memorial, either in person or on Zoom, at a later date.

Broadway San Diego, which brings touring musicals to San Diego each year, isn’t ready to announce new dates for its postponed 44th season yet, but it has announced a replacement for “The Cher Show,” which canceled its tour earlier this year. A new tour of the Tony-winning “Hairspray” musical will take over the “Cher” slot in the season, which will resume when live performances can begin anew at the San Diego Civic Theatre. Visit broadwaysd.com.

Scripps Ranch Theatre and Oceanside Theatre Company have received permission from the playwright to extend the run of their filmed reading of Ian August’s play “Donna Orbits the Moon,” starring Susan Clausen and Eric Poppick.

Originally planned for just one weekend of streaming, it will now be available for streaming for $20 from noon Oct. 9, through noon Oct. 11. Visit scrippsranchtheatre.org.

Pam Kragen writes about theater for the San Diego Union-Tribune. Email her at [email protected]