A side effect of the pandemic could make merchants a little merrier this holiday season.

Because consumers have more money to spend from not traveling, lower fuel costs and a recovering job market,  the National Retail Federation projects shoppers will lay out a record amount on gifts and other trappings of Christmas this year.

The trade group this week predicted spending on gifts and decorations will rise between $755 billion and $767 billion during November and December, an increase of 3.6 percent to 5.2 percent over last year.

Underpinning the record retail sales projection are a surging stock market, strong home sector and higher savings boosted by government stimulus payments, according to the federation.

Add to that the psychological factors of people wanting to splurge on themselves and their families after all they have been through in 2020 and the looming prospect of a vaccine for everyone by the spring, and it all means one thing for shopkeepers: a better bottom line to close out the year.

The potential dark spots in the group’s forecast are surging virus cases and expiring government aid.

“This could pump the breaks on the spending that we’ve seen, but we still believe there will be additional spending through the end of the year,” said economist Jack Kleinhenz, the trade group’s economist.

Because of the uncertainties this year amid the pandemic, the organization waited more than a month to make a sales projection.

That didn’t stop retailers from rolling out sales weeks before Black Friday, the traditional kickoff to the holiday shopping season. And this year, all major stores, following the lead of retail juggernaut Walmart, will be closed on Thanksgiving Day for the first time since the aftermath of the Great Recession.

With the pandemic raging, online sales have surged throughout most of the year as shoppers tried to play it safe and stay home. That trend isn’t expected to slow down as the year closes out, especially as virus cases spike to all-time highs day after day.

The retail group predicts e-commerce sales will jump between 20 percent and 30 percent in 2020, accounting for up to $218 billion in sales that are included in the overall projected total for holiday spending. That’s up from last year’s $169 billion.

On average, shoppers are expected to spend just under $1,000 each on gifts, holiday items such as food and decorations and non-gift purchases for themselves, according to the retail trade group’s study.

The survey, taken in early October, also found one in five consumers who typically travel for the holiday will stay home this year. As cases surged more recently, that number could rise.

About half of those surveyed by the trade group said they would spend some of the money they would have laid out for travel on holiday items.

And, with the surge in click-and-order purchases during the pandemic, the survey found 60 percent of holiday consumers plan to shop online.

Ingrid Baumstark of Mount Pleasant is among them.

While looking over toys at Target in Seaside Farms with her 7-year-old daughter, Alexa, to get ideas for gifts, Baumstark said 90 percent of her purchases will be through her computer.

“It’s more convenient when you have three children and you are shipping stuff everywhere,” the stay-at-home mom said.

She also plans to spend about $500 more than the average consumer in the National Retail Federation study — mostly on toys, clothes and jewelry.

As for Black Friday, Baumstark won’t be out with the crowds. She plans to make the holidays as “normal as we can” and shop for a live Christmas tree after Thanksgiving.

Along with about 42 percent of other consumers, Summerville resident Susan Sawadske started her holiday shopping more than a month ago and she, too, plans to do the majority of her gift-spending, about 75 percent, digitally.

She said it’s not because of the coronavirus but because that’s what she normally does.

While picking out a Clemson T-shirt for a neighbor’s child at Palmetto Moon in Tanger Outlets in North Charleston, Sawadske also said she will spend more than the projected average consumer this year.

We’re starting a weekly newsletter about the business stories that are shaping Charleston and South Carolina. Get ahead with us – it’s free.

As for shopping on the Friday after Thanksgiving, Sawadske normally goes out but this year she doesn’t plan to because of the coronavirus.

Bucking the trend of staying home on Black Friday and shopping by computer will be Raven Orth, also of Summerville.

“I will probably do 80 percent of my holiday shopping in stores,” Orth said while filling a cart for a friend in Walmart in Summerville. “I just like to see everything in person.”

She won’t start her holiday shopping, though, until the day after Thanksgiving and she plans to spend more than $2,000 this year on her husband, four children and extended family members.

Locally owned retailers hope some of the spending, whether online or in-store, will come their way. And many have added websites to offer click-and-order sales as well.

At Park Pets in North Charleston’s Olde Village, store owner Tyewhan Luke said foot traffic is down 60 percent because of the pandemic, but he said his online sales are up 40 percent.

He normally hosts a Christmas party at the store with special gift baskets of $30 in cat products and $50 in dog items. With the virus, the assortments of food, treats and toys will be online only this year in a party-to-go offering.

“Hopefully, we will do 80 percent of what we did last year,” Luke said. “I feel good about it.”

At Lowcountry Olive Oil on Meeting Street in downtown Charleston, store owner Laurie Benjamin is looking for sales via the computer to boost her bottom line as well.

“We expect online sales to double during the Christmas season,” she said. That would extend a trend she’s seen during the pandemic.

Her decade-old business of selling items with “Charleston” on the label is situated along a route that sees tourists come and go between Marion Square and the City Market.

While Benjamin believes foot traffic has increased during the past two months as the tourism trade slowly picks back up, she believes it’s down about 30 percent from normal levels.

“The locals have really kept us going this year,” she said.

In Goose Creek, Turning Page Bookshop owner VaLinda Miller made an appeal for people to support local businesses this year more than ever.

“If you don’t support your local businesses this year, they are not going to be here next year,” she said.

“I know people are nervous and I know they are a little fearful, but if you wear a mask, wash your hands and keep your distance, you can shop at all of these local stores and find everything you need, ” Miller said.

Business has been slow at her bookshop since the pandemic started, but she’s promoting gift packages and books that parents remember when they were children.

Lowcountry Local First normally promotes a “Buy Local Month” from mid-November to mid-December.  This year, it’s calling it “Buy Local Season.” It started Nov. 1 and runs to the end of the year.

With national retailers offering deals earlier this year, the Charleston-based group decided it needed to stretch out its promotion.

“We know that we must invest in what we value or else risk losing it,” Lowcountry Local First spokeswoman Jordan Amaker said. “With all local businesses feeling the impacts of the COVID-19 crisis, our support is more crucial than ever to help pivot consumer spending to our community-based businesses whenever possible.”

Small Business Saturday is this weekend, but leaders at Lowcountry Local First think people should make it a point to shop at locally owned businesses more than one day a year.

“When we support locally owned businesses, 45 percent of each dollar spent stays within our community as opposed to only 14 percent with a non-local business,” Amaker said, citing a recent report.

Thu Nov 26 , 2020
JIANHE, China — Yang Asha smiled serenely down at the craggy emerald landscape, her hand outstretched in welcome. She appeared unmoved by the fierce condemnation her presence has ignited in China — she is, after all, made of gleaming stainless steel and bigger than the Statue of Liberty. To officials […] 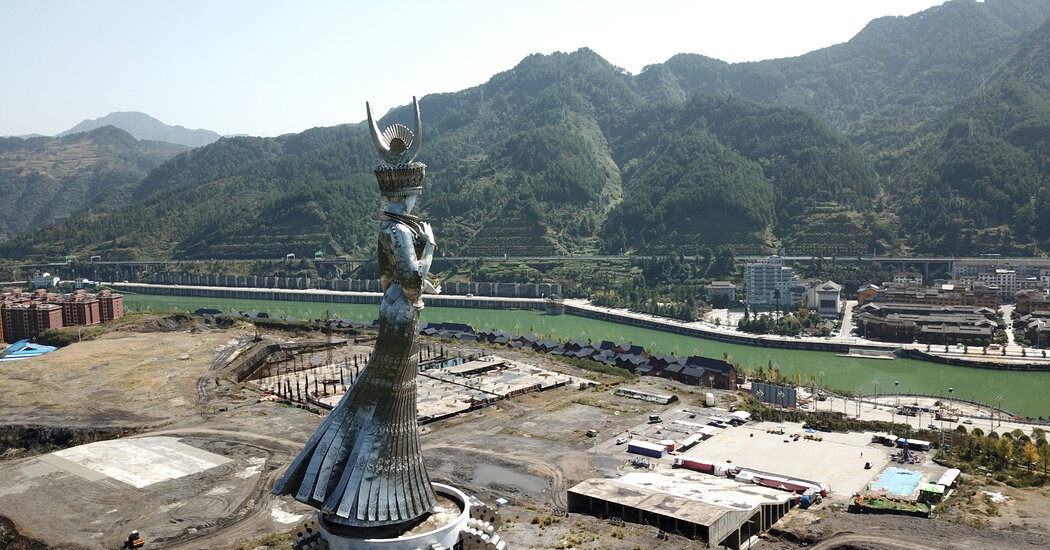