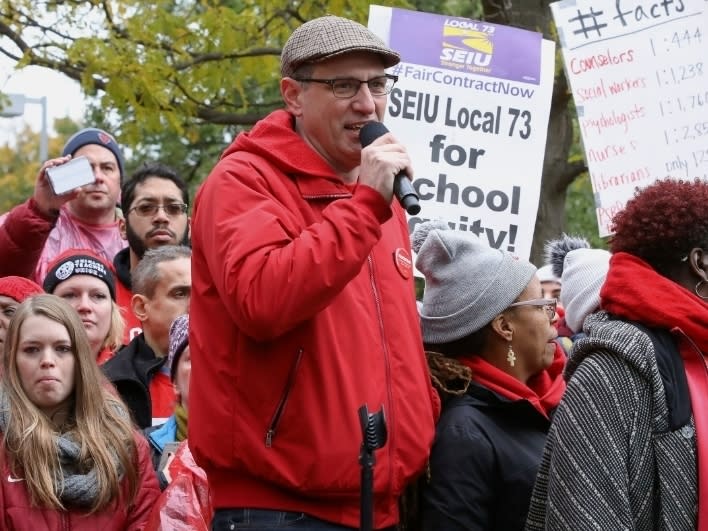 CHICAGO — Please stop making threats against Chicago Teachers Union executive board member Sarah Chambers. Instead, be thankful the high school teacher pushed fearmongering propaganda about the reopening of public schools during the coronavirus crisis while visiting a buddy in Puerto Rico for the holidays.

Commonsense Chicagoans need people like Chambers — who didn’t realize it was a bad idea to tweet a cheesecake selfie poolside from a COVID-19 hot spot the Centers for Disease Control and Prevention says everybody should avoid on the same day she decried the dangers of teaching in socially distant classrooms.

Chambers’ vacation photos made the local TV news, and word of her hypocrisy spread like a pandemic across the globe. “And now come the fun death threats DMs,” Chambers posted on her now-deleted Twitter account.

Chambers deserves better. She should be hailed as a hero for giving Chicagoans another reminder that the teachers union leaders remain a group of out-of-touch phonies and hypocrites using the coronavirus crisis to gain political might.

Without her, more-reasonable people might’ve been duped into believing CTU’s planned theatrics Monday when a handful of teachers taught online students in freezing temperatures rather than going inside empty classrooms because doing so made them “afraid for our lives.”

There might not be a reason to remind folks that we’re dealing with a teachers union — led by a white guy — that used its Twitter feed to declare a push to reopen schools by Mayor Lori Lightfoot and public schools chief Janice Jackson, both Black women, was “rooted in sexism, racism and misogyny.”

While the fearmongering propaganda and Twitter hypocrisy are important to note, they shouldn’t distract from the fact that CTU bosses never say exactly why the school system’s detailed safety protocols remain wholly unacceptable for a slow rollout for socially distant in-person learning. Those protocols are strikingly similar to what American Federation of Teachers President Randi Weingarten called for in an op-ed in The Hill offering a “blueprint to safely open schools.”

Is it the $100 million in ventilation system upgrades that isn’t good enough? Could it be hiring 400 additional janitors and a team of independent state-certified environmental specialists to conduct air quality checks isn’t a good idea? Maybe it’s the $9 million CPS spent to put air purifiers in every room, the hospital-grade disinfectant sprayers at every school or the $3.5 million in soap and sanitizer dispensers in high-traffic areas that CTU doesn’t think is up to snuff.

We’ll probably never know because the CTU officials continually make vague proclamations about what’s wrong with the Chicago public school plan without evidence to back it up. “Everything about what they are doing is wrong,” CTU Vice President Stacy Davis Gates once said in a statement.

Rather than presenting solutions for the greater good of students and teachers, union bosses seem to be posturing for a possible strike. Someone sent me CTU’s action timeline for this month, which includes recommending teachers ditch school and “continue to work remotely,” plans for a “special meeting” of the house of delegates and “escalated workplace actions” slated for Jan. 25.

Meanwhile, CTU boss Jesse Sharkey is quietly leveraging the coronavirus crisis to improve the union’s future bargaining power. On Dec. 28, he penned a letter urging state senators to revive a bill during the lame-duck session set to start Friday.

Long coveted by CTU bosses, House Bill 2275 would eliminate a provision in state law that limits what school officials are required to negotiate with the union. The bill has languished in the Senate since 2019, a source told me, at the request of former Mayor Rahm Emanuel.

In his letter to senators, Sharkey argued the union’s bargaining limitations “creates a significant safety issue during the pandemic, one that threatens to put thousands of people’s health at risk because of the CPS’s refusal to discuss common health and safety issues pertaining to children and staff.”

All it would take is a state Senate confirmation and Gov. J.B. Pritzker’s signature to give CTU the power to demand negotiations — and ultimately call a strike — over issues such as shorter school days, staffing and class-size requirements that state law leaves up to the school system’s discretion.

“It is this discretion that is at the core of our concerns with Chicago’s pandemic response,” Sharkey wrote.

CTU’s goal is a “negotiated agreement” that it can’t get because, after dozens of meetings, CPS officials refuse to negotiate by “hiding behind” state law, Sharkey’s letter says.

What the CTU boss doesn’t mention in his letter to senators is those meetings with school officials about reopening plans have devolved into union demands for a pledge to lobby for “defunding police” and “rent abatement,” according to people familiar with the closed-door discussions.

Before Senate President Don Harmon decides whether to call for a vote on a bill to boost CTU’s bargaining power before the legislative session expires Jan. 13, I hope he remembers what we’ve learned from Sarah Chambers’ poolside tweets from Puerto Rico.

There’s what CTU leaders say publicly, and what they’re really up to.

Mark Konkol, recipient of the 2011 Pulitzer Prize for local reporting, wrote and produced the Peabody Award-winning series, “Time: The Kalief Browder Story.” He was a producer, writer and narrator for the “Chicagoland” docu-series on CNN, and a consulting producer on the Showtime documentary, “16 Shots.”

This article originally appeared on the Chicago Patch