The company plans to trade on the Nasdaq under the symbol
“POSH.” Underwriters include Morgan Stanley, Goldman Sachs and Barclays.

Poshmark says it will have Class A and Class B shares, and has set a target of raising $100 million, typically a placeholder amount used in a filing with the Securities and Exchange Commission that is later amended.

Poshmark has filed at a time when e-commerce is booming, due to factors including in-store shopping restrictions related to the COVID-19 pandemic and an accelerated consumer migration to digital retail.

Poshmark launched in 2011 and is based in Redwood City,
Calif. Manish Chandra is a co-founder of the company and serves as its chief
executive and board chairman.

Among those on the company’s board is Grand Slam tennis champion Serena Williams.

Poshmark’s customers skew young, with 80% falling into the
millennial or Gen Z demographic as of Dec. 31, 2019. Users spend an average of
27 minutes per day on the marketplace, and active buyers placed an average of
6.3 orders in 2019.

Poshmark’s marketplace includes both new and secondhand merchandise, with more than 201 million items on sale as of Sept. 30.

A recent Cowen & Company report, which also relies on data from the ThredUp 2020 Resale Report, forecasts that shoppers will spend 52% more on secondhand items over the next five years, with online resale expected to grow from $7 billion in 2019 to $37 billion by 2025.

are among the growing list of online retailers selling secondhand goods.

“We win when our sellers win; we earn our revenue based on a
simple fee from each successful transaction that is conducted on our marketplace,”
the prospectus said.

Also: Retail bankruptcies in 2020 hit the highest levels in more than a decade, and experts say there are more to come

Here are five more things to know about Poshmark:

The company doesn’t plan to pay a dividend. Poshmark intends to hold on to all available funds and future earnings and not pay a dividend for the foreseeable future.

COVID-19 could impact deliveries, which will impact revenue. “If delivery services are delayed or shut down, or if they are perceived as unreliable, our GMV [gross merchandise value] and revenue could be negatively impacted in the future,” the prospectus said.

Even after the pandemic has passed, experts expect customers to continue to order many goods digitally. The Cowen report forecasts that U.S. e-commerce will grow from $586 million in sales in 2019 to nearly $1.40 billion by 2025.

Poshmark uses the U.S. Postal Service to ship items in the
U.S.

“Responses to the COVID-19 pandemic such as prolonged work-from-home policies, quarantines, closures, and travel restrictions could continue to depress demand for the products sold on our platform,” the prospectus said.

Watch: How to pick winners in the retail sector amid the pandemic

“Even if a virus or other disease does not spread
significantly and such measures are not implemented, the perceived risk of
infection or significant health risk may adversely affect our business, results
of operations, and financial condition.”

Fraud has been a problem. “We have in the past incurred and may in the future incur losses from various types of fraud, including stolen credit card numbers, account takeovers, claims that a user did not authorize a purchase, merchant fraud, and users who have closed bank accounts or have insufficient funds in open bank accounts to satisfy payments,” the prospectus said.

Poshmark is also dependent on its sellers to provide a positive
customer experience, and offer items that are on-trend and good quality.
Poshmark says it has received complaints from “a small portion of users” about
issues like failure to receive items purchased or misrepresented items.

Poshmark may have to lower its fees. “In the future, we may be unable to attract new sellers or retain current sellers at these fee levels, as they may choose to sell their merchandise on other platforms with lower fees,” the prospectus said.

“Furthermore, pricing pressures and increased competition
generally could result in having to decrease fees, which could cause reduced
revenues, reduced margins, or losses, any of which would harm our business,
results of operations, and financial condition.”

Poshmark will remain an emerging growth company until it
reaches certain criteria, including the last day of the fiscal year in which it
has reached $1.07 billion in annual revenue. Under the JOBS Act, emerging
growth companies can delay the adoption or revision of accounting standards.

Wed Dec 23 , 2020
Natalie Aronno is attending UC Irvine remotely to study dance. (Christina House/Los Angeles Times) Part of a year-end series revisiting subjects of some of our most popular arts articles of the year. For freshman starting college this fall, COVID-19 upended their education, as some colleges closed their campuses and offered […] 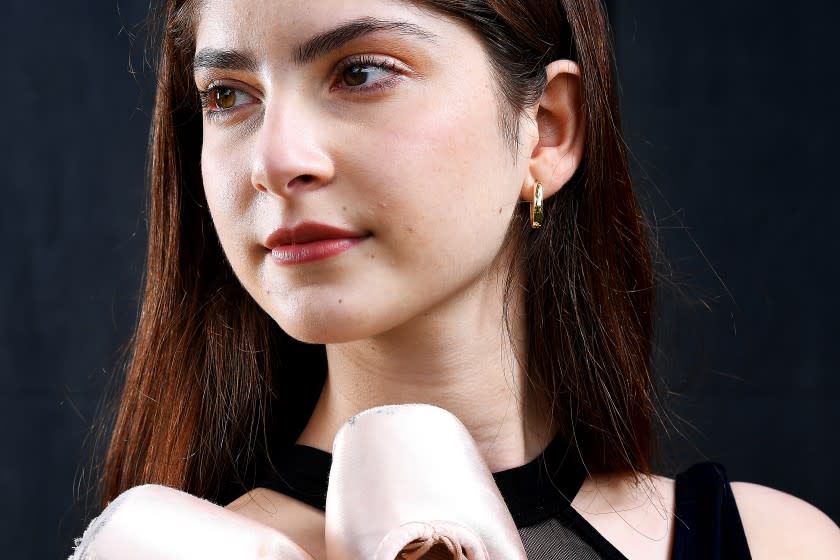