Britons in Portugal, or those with a holiday booked, could be in for disappointment as Covid-19 cases in the country rise once again.

Figures published yesterday show the number of cases per 100,000 over seven days – the metric used by the Government to determine which country is on the UK’s travel corridors list – is now at 18.1.

Paul Charles, CEO of travel consultancy The PC Agency, told the Telegraph: “Portugal is likely to go back on the UK’s quarantine list this week and the country itself is now preparing a ‘State of Contingency’ from September 15.

“It has been unable to manage its caseload over the last two weeks as more tourists have entered Portugal, especially Lisbon and Porto.”

The UK Government has said that 20 cases per 100,000 over seven days is the threshold after which travel corridors are reassessed.

Grant Shapps announced on Thursday that Switzerland, the Czech Republic and Jamaica have been removed from the UK’s travel corridors list after crossing this threshold. Anyone returning from these countries after 4am this morning must go into quarantine for 14 days. Cuba, where cases are on the decline, has been given the green light for holidays.

Yesterday, Portugal recorded 401 cases of Covid-19, the highest tally since July 11. The rise comes just one week after Portugal was removed from the UK’s quarantine list, to the relief of business owners in Portuguese destinations like the Algarve, reliant on British holidaymakers.

Grant Shapps, the Transport Secretary, has said that anyone travelling abroad needs to do so with their “eyes open” to the possibility that they may need to go into a 14-day quarantine on their return.

British holidaymakers can expect their pound to go further this autumn as the cost of a holiday has fallen in two thirds of Europe’s most popular cities since last year, new research has shown.

The Post Office, which publishes an annual assessment of city break costs, looking at the price of food, transport and hotels among other factors, found that prices are as much as 26 per cent lower than in 2019 and have also dropped by up to 26 per cent on pre-lockdown levels in early March.

Reykjavik and Oslo, typically some of the most expensive destinations for Britons, saw the largest falls (down 26 per cent), while prices for a city break also fell significantly in Ireland and Italy; Belfast (down 23 per cent), Rome (down 20 per cent), Dublin (down 19 per cent) and Milan (down 18 percent).

Paul Charles, CEO of travel consultancy The PC Agency, reviews the situation in Portugal and Greece:

“It’s a worsening picture. I’m afraid to say you can see the rising case numbers across Europe; however, the intensive care and death rates remain extremely low. Portugal is likely to go back on the UK’s quarantine list this week and the country itself is now preparing a “State of Contingency” from 15th September. It has been unable to manage its caseload over the last two weeks as more tourists have entered Portugal, especially Lisbon and Porto.

“The case numbers are rising in Greece as well, also because of greater tourist numbers over August and it has now gone into our Amber zone. So British tourists need to be aware and keep an eye on how Greece tackles its cases in the coming days.

“All of this points to the need for a world-class testing regime to be introduced in the UK – then business and leisure travellers would be able to plan for the Autumn season knowing they could be properly assessed on their return. I’m certain that many travellers would be prepared to pay for their tests as well.”

As of 4am this morning, anyone arriving into the UK from Switzerland, Czech Republic or Jamaica will have to go into self isolation for 14 days.

This comes after cases in the three countries have exceeded 20 per 100,000 (7-day cumulative figure).

Transport secretary Grant Shapps made the announcement in a Tweet on Thursday, giving holidaymakers just under 36 hours to get home before the quarantine came into effect.

Data shows we need to remove the Czech Republic, Jamaica and Switzerland from our list of #Coronavirus Travel Corridors to keep infection rates DOWN. If you arrive in the UK after 0400 Saturday from these destinations, you will need to self-isolate for 14 days.

The picture from Stansted

Our reporter, Emma Cooke, has travelled to Northern Ireland via Stansted – things were rather quiet at the airport…

Center Parcs is ‘a ghost town with serious perks’

James McAndrew recently went on a holiday to Center Parcs. Here’s his take:

“Was it worth the money? We managed to schedule two or three big activities a day and everyone, from the two-year-old to the 57-year-old, had their days filled. All told we found it a safe bet for staycation in the current climate. Safety arrangements were never oppressive or uncomfortable, and a couple of minor inconveniences (none of which we’re not already used to), didn’t prevent us maximising a holiday that wasn’t on the cards until recently. Did it still feel like a holiday? Well, it felt like Center Parcs – and that, for my family at least, is a holiday.”

What’s going on in Italy, Turkey and Greece?

A quick look at the Covid-19 situation in three ‘green list’ countries.

Here’s our analysis of which countries could be removed from the ‘green list’ next.

The southern African country of two million now has 6,906 confirmed cases and the virus is not yet contained – of its 65 deaths, 55 were in August alone.

But as with other southern African nations, leaders are weighing the impact of the virus against the economic and social damage done by lockdowns.

“The virus is likely to remain in our midst for a prolonged time and we must learn to live with it … learning to live with the virus means adapting our attitudes and behaviours so that we can reduce the damage it can do to our country,” Geingob said in a televised address.

He announced that an 8pm to 5am curfew in place in the capital Windhoek and the Erongo region – Covid-19 hotspots – will be introduced across the country.

But Hosea Kutako International Airport will open its doors to international travellers from Tuesday, while schools, vocational education training providers and universities will be allowed to hold onsite classes from September 7.

Restaurants and hotels outside worst-affected Windhoek and the Erongo region can start selling meals and alcohol to be consumed on the premises, the President announced.

Namibia is still on the UK’s ‘red list’, meaning anyone arriving into the UK from the country will need to go into quarantine for 14 days.

Sweden’s national health body has proposed raising the limit on certain public gatherings from 50 to 500, as the country’s rate of infection continues to stabilise.

Anders Tegnell, a state epidemiologist, said: “We have made a consultation response following a request from the government.”

The agency said the proposal applies to events with numbered seats, and Tegnell also indicated that a further increase of the gathering limit was under consideration.

Sweden is yet to be included on the UK’s travel ‘green list’.

Fewer than a third of arrivals to the UK are being checked to ensure they have forms to aid test and trace efforts, under targets set for Border Force officials.

It raises the prospect that hundreds of thousands of people have entered the country without the documents being inspected.

Arrivals in the UK from abroad must submit a passenger locator form online beforehand, to be shown at the border either in printed form or on a mobile device.

Question marks over enforcement have also been raised by figures showing that just five people have been fined £100 for breaching their quarantine once back in the UK.

The Telegraph has established there is no surveillance tracking out the levels of infections coming back from holidaymakers from each country, unless they report symptoms and have a test.

France has recorded its biggest daily rise in coronavirus infections since March, while President Emmanuel Macron has raised the possibility of another nationwide lockdown.

A further 7,379 cases were confirmed on Friday, bringing the country’s total to 267,077 and making it the largest daily spike since March 31, when 7,578 cases were tallied at the peak of the first wave.

France was seeing an “exponential” rise in cases, the health ministry said, and the surge follows daily increases of 6,111 on Thursday and 5,429 on Wednesday.

But despite the rise, hospital numbers and daily deaths have been relatively stable as younger people less vulnerable to the virus make up most of the new cases, the ministry said.

Shortly before Friday’s figures were released, Mr Macron said a second national lockdown could not be ruled out if infections spiralled out of control.

“We’re doing everything to avoid another lockdown, and in particular a nationwide lockdown,” he said, but added that it couldn’t be ruled out.

“Containment is the crudest of measures to fight against a virus,” said Mr Macron, urging people to be “collectively very rigorous”.

Where else are cases on the rise?

Travel expert Paul Charles has crunched the numbers, and shows the countries in the ‘red’, ‘amber’, or ‘green’ when it comes to cases per 100,000.

What is the situation in Portugal?

Here’s a look at the case numbers in Portugal

The number of Covid-19 cases per 100,000 in Portugal, over seven days cumulative, has been:

Thousands of holidaymakers are expected to visit the counties of Dorset, Devon and Cornwall this weekend, with police expecting busy roads and increased demand on emergency services.

Incidents of littering, fly-tipping and wild camping in the region have risen 29 per cent on last year, while anti-social behaviour has gone up 20 per cent.

Devon and Cornwall Police said the latest figures for August show 999 call demand remaining at record levels with a 13 per cent increase in calls compared with the same period in 2019.

A spokesperson for Dorset Police told the Dorset Echo:

“Many thousands of visitors, some already in the region, are expected to be residing in the county over the three-day holiday with congested roads and demand on all emergency services resources expected to be high. Tourism bosses are already predicting the region is at full capacity.”

No concerts but food boxes for the hungry

Sat Aug 29 , 2020
Ed Tom, director of operations at the Hollywood Bowl, started as a teenage usher 48 years ago. He says his summertime staff of 500 is down to 17, but he’s working to keep the venue ready to go the minute it can welcome guests back in. (Al Seib / Los […] 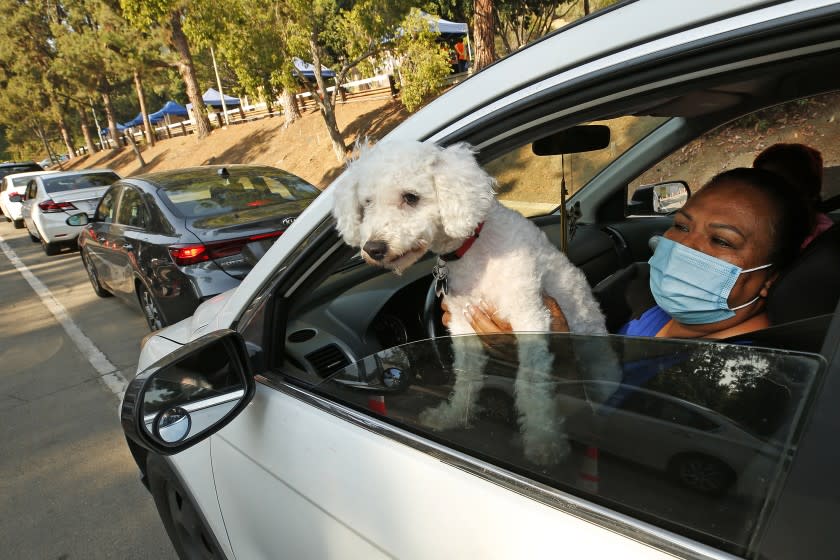