MANILA, Philippines — Coronavirus infections in the Philippines surged past 100,000 Sunday after medical groups declared that the country was waging “a losing battle” against the virus and asked the president to reimpose a lockdown in the capital.

The Department of Health reported a record-high daily tally of 5,032, bringing the total confirmed cases in the country to 103,185, including more than 2,000 deaths. The Philippines has the second-most cases in Southeast Asia after Indonesia.

More than 50,000 infections were reported in less than four weeks and leading hospitals began warning that their coronavirus wards were fast being overwhelmed to capacity again, as they were when cases soared alarmingly in April.

After Duterte further relaxed quarantine restrictions and allowed more businesses, including gyms, internet cafes and tattoo shops, to reopen, leaders of nearly 100 medical organizations held an online news conference Saturday and warned that the health system may collapse as many medical personnel fall ill or resign out of fear, fatigue or poor working conditions.

— Thousands have converged in Berlin to protest Germany’s coronavirus restrictions at a demonstration proclaiming “the end of the pandemic” has arrived. The protest comes as German authorities are voicing increasing concerns about an uptick in new infections.

— Travelers entering France from 16 countries where the coronavirus is circulating widely are having to undergo virus tests upon arrival at French airports and ports.

— British Prime Minister Boris Johnson says he is postponing some planned measures to ease the lockdown because the number of new coronavirus cases in the country is on the rise.

TOKYO — Confirmed coronavirus cases are hovering at near record levels in Japan, raising worries the pandemic may be growing more difficult to control.

The Tokyo government reported 292 new cases Sunday, about half in their 20s. Japan in total reported 1,540 cases on Saturday— the second straight day the number was above 1,500.

Nationwide cases for Sunday will be tallied at midnight. Numbers are usually fewer over the weekend because of fewer tests.

TEL AVIV, Israel — An Israeli Cabinet minister says he has tested positive for the coronavirus.

Minister for Jerusalem and Heritage Rafi Peretz tweeted late Saturday that he received a positive result after being tested the previous day. He said he felt well.

Peretz is the second Israeli minister to have been infected with the virus. Israel’s former health minister, Yaakov Litzman, also contracted it and later recovered.

Israeli media reported that contact tracing was being conducted to determine whether Israeli Prime Minister Benjamin Netanyahu or other legislators would need to self-isolate following Peretz’ diagnosis.

Israel is experiencing a surge in coronavirus cases after having largely contained an earlier outbreak in the spring.

MELBOURNE, Australia — The premier of Australia’s hard-hit Victoria state has declared a disaster among sweeping new coronavirus restrictions across Melbourne and elsewhere from Sunday night.

An evening curfew will be implemented across Melbourne from 8 p.m. to 5 a.m. Premier Daniel Andrews says the state of disaster proclamation gave police greater power.

He says 671 new coronavirus cases had been detected since Saturday, including seven deaths. It comes among a steadily increasing toll in both deaths and infections over the past six weeks in Victoria.

Melbourne residents will only be allowed to shop and exercise within 5 kilometers (3 miles) of their homes. All students across the state will return to home-based learning and child care centers will be closed.

The deaths in Victoria took the national toll to 208.

NEW DELHI — India’s coronavirus caseload crossed 1.75 million with another spike of 54,735 in the past 24 hours.

Randeep Guleria, a top government expert, said that New Delhi and Mumbai may have crossed their peak levels with declining trends.

The month of July alone has accounted for more than 1.1 million cases in India.

Health Minister Harsh Vardhan said the case fatality rate was progressively reducing and currently stands at 2.18%, one of the lowest globally. Out of the total active cases, only 0.28% are on ventilators, 1.61% need intensive care support and 2.32% oxygen support.

MELBOURNE, Australia — Australian media are reporting that coronavirus-forced restrictions in Melbourne could be tightened from next week as authorities try to stem the spread of COVID-19.

The Sunday Age reported the city may be placed under a six-week period of more stringent constraints, including the almost complete shutdown of Melbourne’s public transport network, starting from Wednesday.

The Sunday Herald Sun reports Victoria state Premier Daniel Andrews will announce the new measures over the next two days. They also include limiting the distance residents could travel from their homes and the closure of more businesses selling non-essential goods.

It comes as Australia’s COVID-19 death toll rose to 201, with Victoria state leaders considering New Zealand-style lockdowns to get community transmission under control. Victoria on Saturday reported the deaths of a man and two women aged in their 80s and 90s, and 397 new cases.

The state’s chief health officer, Brett Sutton, said stricter lockdowns like those enforced in New Zealand were being considered. Under the New Zealand model, all businesses would shut down except for essential services.

On Sunday, New South Wales confirmed its first coronavirus-related death in more than a month as authorities sought to suppress a number of growing clusters at a hotel and several restaurants in Sydney.

South Africa, with a population of about 58 million, has the fifth-highest number of cases in the world, behind the U.S., Brazil, Russia and India, all countries with significantly higher populations, according to a tally by Johns Hopkins University. Experts say the true toll of the pandemic worldwide is much higher than confirmed cases, due to limited testing and other reasons.

South Africa’s Gauteng province — which includes Johannesburg, the country’s largest city and Pretoria, the capital — is the country’s epicenter with more than 35% of its confirmed cases. Local hospitals have been struggling to cope, and health experts say the country could reach the peak of its outbreak in late August or early September.

Cape Town, a city beloved by international tourists at the country’s southern tip, was the first epicenter and reached its peak last month, according to health experts.

WASHINGTON — Rep. Raul Grijalva of Arizona says he has the coronavirus.

The Democrat says he tested positive for the coronavirus days after he sat close to another member, Texas Rep. Louie Gohmert, who announced a positive test this week.

The 72-year-old Grivalva is at least the 11th member of Congress known to have tested positive for the virus.

Gohmert, a Republican, has questioned the use of masks and often walked around the Capitol without one.

Grijalva released a statement, saying in part: “This week has shown that there are some members of Congress who fail to take this crisis seriously. Numerous Republican members routinely strut around the Capitol without a mask to selfishly make a political statement at the expense of their colleagues, staff, and their families.”

ATHENS, Greece — Greek authorities say there were 110 new confirmed coronavirus cases in the past 24 hours, the fourth-highest daily figure and highest since April.

Only nine of the cases involved incoming travelers.

Greece has 4,587 total confirmed cases and 206 deaths, with no deaths reported Saturday.

The bar owners argue the Democratic governor’s restrictions are unconstitutional, unlawfully targeting one business sector without enough evidence to back up Edwards’ assertion that bars are driving the spread of the COVID-19 disease more than any other businesses.

The governor and his health advisers say bars have shown to be specifically problematic because people tend to huddle closely together inside without masks while drinking and lapse in their virus precautions the more alcohol they consume.

The White House coronavirus task force recommended Louisiana close bars to reduce public health risks and lessen the spread of the virus.’S WHAT ELSE IS HAPPENING:

ST. PETERSBURG, Fla. — Florida health officials have reported 179 new deaths from the coronavirus, bringing the state’s total to more than 7,000.

The latest numbers came Saturday as Hurricane Isaias threatened Florida’s eastern coast, but no evacuations were immediately announced. The National Hurricane Center’s latest prediction had the storm scraping past Florida but not making landfall.

WASHINGTON — Talks on a huge coronavirus relief measure resumed on Saturday, focused on restoring a newly expired $600-per-week supplemental unemployment benefit and hundreds of billions of dollars in other aid to states, businesses and the poor.

The Trump administration is willing to extend the $600 jobless benefit, at least in the short term. But it’s balking at other demands of Democratic negotiators like aid for state and local governments, food stamp increases, and assistance to renters and homeowners.

Unemployment insurance is a principal element of the COVID-19 relief bill, which is expected to grow considerably from a $1 trillion-plus GOP draft released this week.

ROME — Italy’s daily coronavirus infections has dipped under 300 cases for the first time in three days, after a recent flurry of clusters throughout the nation raised concern among health experts.

The ministry’s weekly report says there were 123 clusters of infection throughout Italy in the previous seven days.

Meanwhile, Health Minister Roberto Speranza ordered the railways to resume leaving empty seats so passengers can be at least one meter (3 ½ feet) apart during summer travel.

With five more deaths, the total confirmed deaths in Italy reached more than 35,000 on Saturday.

MIAMI — Hurricane Isaias is heading toward the Florida coast, where officials say they were closing coronavirus testing centers and navigating safety measures for evacuation facilities.

Officials in Miami have 20 evacuation centers on standby with social distancing in mind.

Florida Gov. Ron DeSantis says the state was “fully prepared for this and any future storm during this hurricane season,” with stockpiles of personal protective equipment, generators, bottled water and meals ready to be distributed.

The U.S. National Hurricane Center in Miami says Isaias had maximum sustained winds of 85 mph Saturday morning and some strengthening was possible later in the day.

LONDON — A scientist advising the British government on the coronavirus pandemic says pubs in England may have to close to allow schools to reopen in September.

Graham Medley, a member of the government’s Scientific Advisory Group for Emergencies, told the BBC that there may have to be a “trade off” between the opening of schools — which he says is considered a priority by most people — and activities like going to pubs.

His comments on Saturday came after chief medical officer Chris Whitty warned the country was “near the limits” of loosening restrictions introduced to curb the spread of the coronavirus.

On Friday, Prime Minister Boris Johnson announced that some measures to ease the lockdown, such as the reopening of casinos and bowling alleys and fans at sporting events, will be delayed because of an increase in virus cases. ___

ROME — Several small boats filled with Tunisian migrants have reached a tiny Italian island that has run out of room to quarantine them as required by Italy’s anti-coronavirus measures.

Lampedusa Mayor Toto’ Martello says the island is waiting for the government to send a chartered ferry where the migrants can be held for 14 days to fulfill the country’s quarantine requirement.

The island’s migrant holding center was built for a maximum capacity of 95 people and was already holding 950 when the latest passengers arrived, Martello says in the Sicilian daily newspaper Giornale di Sicilia.

The 250 who arrived between Friday night and Saturday must stay on the dock for now, until the promised ferry arrives or some other solution is found.

Sun Aug 2 , 2020
Katie Holmes stepped out for an adventure to an antique store in New York yesterday. She bought a huge $225 antique portrait from the early 1900s that was titled “Bright and Early Coffee.” Holmes wore her classic summer look: wide-legged jeans paired with a plain box tee-shirt and black strappy […] 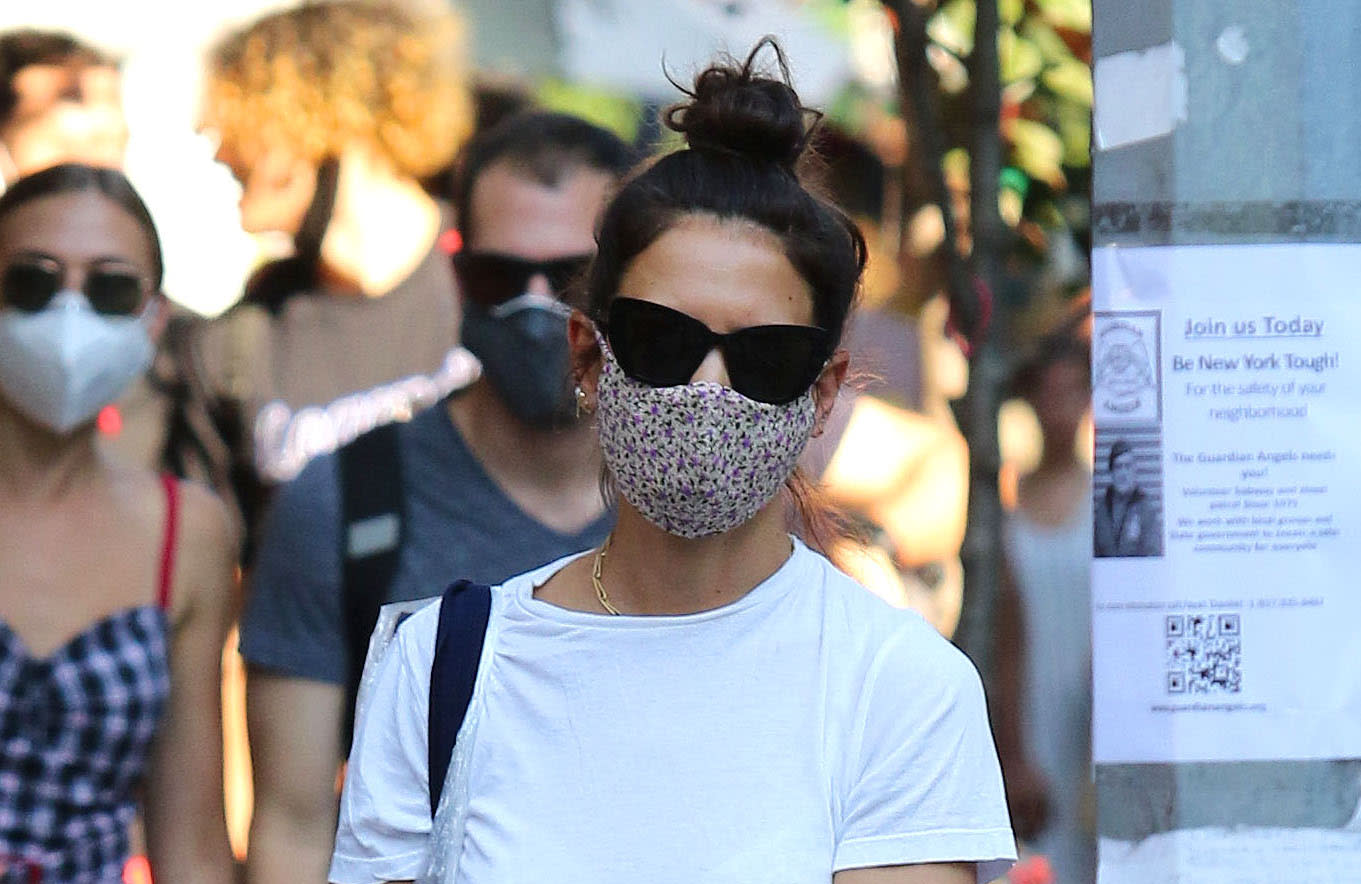