When performer, choreographer and veteran talent competition judge Paula Abdul received a call from Fox asking her to be part of “The Masked Dancer,” a spinoff to wacky competition show “The Masked Singer,” her first reaction was laughter.

On “The Masked Singer,” based on the South Korean original, celebrity contestants perform in elaborate costumes as panelists try to guess the identities behind the masks.

“The Masked Dancer” uses a similar format, but instead celebrities — some with extensive training and others without — perform hip-hop, tap, salsa and other dance numbers as over-the-top characters including Sloth, Moth and Ice Cube. Returning panelist Ken Jeong and newcomers Brian Austin Green, Ashley Tisdale and Abdul make their guesses based almost solely on dance moves and clues sprinkled throughout the show, which premieres Sunday.

Abdul, who has been splitting time between L.A. and Palm Springs, spoke to The Times about her experience on “The Masked Dancer,” which she called one her top three favorite projects. The following has been edited for clarity and length.

How is the judging process on “Masked Dancer” different from other shows you’ve worked on such as “American Idol” or “So You Think You Can Dance”?

The cool thing about this is, it’s not like we’re judging. It’s about celebrating the fact that — whether they have formal training or not — they are having a blast on their stage. And they have that reckless abandon and freedom of being in a costume and dancing, whether it’s something that they like as a hobby or something that they’ve never even done before. For us, it’s not about judging, it’s about commenting on all the wonderful things that we did see and funny things or obvious things that lend itself to a clue as to who these people are.

Are there any favorite moments from the show that you can share?

Sitting next to Ken Jeong is quite the experience. The whole panel got along great. One of the fun things that I can directly relate to Ken Jeong is there’s only one part in the show format where the [contestants’] voices are unmodulated for just one word. The segment’s called “Word Up,” and the song “Word Up” plays by Cameo. And when that happens, it’s like Ken and I are racehorses at the starting gate, and we can’t wait to start, because we start dancing through the whole process.

I pride myself on being a dancer, but you know how yawns are very contagious? Well, this is what happens with dancing. I see peripherally to the left of me a guy who’s just doing crazy dance steps on the upbeat as opposed to the downbeat, and it’s contagious because then I can’t dance. I started inhabiting his dance moves. I just learned early on, if you can’t beat ’em, just join ’em.

As someone who has coached performers on dancing, what do you look for in a performance, or what catches your eye?

When a dancer has a certain je ne sais quoi-like spirit about them or they have some technique, that’s wonderful. But it’s the ones who inhabit their own special sauce, so to speak. They’ve created something that’s so unique to them. As a choreographer, that’s what I’ve worked on with artists, to create their own very individualized persona. Certain stances and certain looks and certain angles and things that become so unique to them.

That’s what’s incredible because so many people love to dance, but I look for the personality in the dance. That’s what excites me. Technique is beautiful to watch, but it doesn’t always reach my heart. It has to be someone who’s extra unique. And that’s not always in the training.

As a legendary choreographer who has worked with Janet Jackson, George Michael and others, did you ever find yourself nitpicking the actual steps that the contestants were doing or wishing that you could choreograph any of the dances?

I always am such a big fan of dancing, and I’ll always be a choreographer. There were some times where I’d go, oh man, I wish I could have choreographed that part — that’s inevitable, that goes with everything that I do. But I was so taken by the creativity, and how the choreographers that work on the show, how they were able to really capture key movements that were very, very particular to the character that they were.

The costumes are so elaborate. It seems like it would be challenging to dance in something like that.

I was in awe of the costume designers. They were able to do such elaborate outfits. They were lightweight and incorporated a lot of Lycra so that these performers could kick, they could do flips if necessary, but it never took away from the intricacy of the costuming. The costumes were beautiful, very creative. It’s not easy dancing in the costume where you’re covered in a head mask that has some weight to it. It has to be weight-distributed evenly, so that you can spot for turning and you still feel the center core of your body. Otherwise, if it’s not weight-calibrated right, you could be top heavy and fall. So with all of that and the fact that they’re doing major choreography, it’s amazing to see that they’re able to do it with such limited visibility.

This is a bit of a hypothetical question, but are there any dancers — from any era — that you’d be able to pick out immediately in full costume?

From the past as being a choreographer, I’ve worked with so many artists. I think anyone would be able to tell it was Michael Jackson, if Michael was costumed. He’s very specific. The thing that’s cool is that some of the dancers that are trained dancers have gone out of their way to make the choreography look different to try to fool us.

But I think for me, having a career as a choreographer, I’m so in tune with body movements. I can tell, sometimes by the way people are even walking or little nuances while they’re standing there, how their stance is. And some of my guesses have been specifically just on that, not even their dancing. It’s a different toolset that I have based on my years of working with artists.

I read somewhere that a lot of your iconic choreography came to you in dreams. I was wondering if you still had dance dreams and if you’ve been choreographing recently?

Oh, definitely. I did choreography for my Las Vegas residency. On my side table, I have a tripod. I have a camera. I have a tape recorder. Some of my dreams wake me up and I’ll write down notes, or even in the drunken slumber, in my pajamas, I’ll get up and I’ll start marking up steps just so I don’t forget them.

What’s been your experience working on this show during the pandemic? What were the safety precautions like?

I feel so extremely lucky and grateful that I had the ability to work during the pandemic. Fox spared no expense of working with state and city officials to make sure all the COVID rules are implemented. And on top of that, having Ken Jeong as a doctor who is so particular, and so full-on task force, making sure everyone’s safe. I never felt more safe. We got tested almost every single day.

We were grateful to have a virtual audience involved, and the virtual audience was able to partake during our taping days so that they could vote on the performances. Besides it being one of the most fun experiences I’ve had, it was such a gift to be able to be excited during lockdown, during quarantine, where I could get up every day and be excited to go to work.

Was it weird having a virtual audience there instead of an in-person audience?

It’s harder, I think, for the performers. But then, because they’re in a costume, they don’t have that expectancy of a live audience reacting. We were whoopin’ and hollerin’, but I think that it worked out pretty well. I didn’t feel a deficit at all. It was such a limited amount of crew on set, and we got through it. The crew was laughing at times when it requires a laugh or two, and Craig Robinson as the host was so incredible. He’s so incredibly talented, and he just was great.

How has 2020 been for you and what’s been getting you through the pandemic?

I went from zero to 100, back to zero. I literally trained a year and a half of my life, putting my Las Vegas show together. And then I did my residency, and I finished the second week of January. I just finished my first part of the residency, and I knew I was going to be coming back in August. So I went on a little vacation and did some skiing, and then bam, it hit.

I was used to performing every single week in Las Vegas and then to go from that to nothing, it was a hard transition. I started doing what everyone did. I binge-watched everything that was on TV. But then I started getting bored, and I would go on long walks with my dog. I started picking up hobbies, things that I would never normally do.

I was taking cooking classes online. I was even taking tap classes online and ballroom dancing, which is hysterical because you’re by yourself and you’re watching your partner on TV. I have a group FaceTime chat with like 20 people; we spoke like three times a week and that was great.

But for me, I love working, and I missed that. So when I got called to do “The Masked Dancer,” I was really grateful that I could be around creative people and truly work.

What are you most looking forward to next year?

Where: Fox
When: 8 p.m. Wednesday
Rating: TV-PG-DL (may be unsuitable for young children with advisories for suggestive dialogue and coarse language)

Save big on Apple, Sony, Bose, Samsung, and more

Sun Dec 27 , 2020
Yahoo Life is committed to finding you the best products at the best prices. We may receive a share from purchases made via links on this page. Pricing and availability are subject to change. The post-Christmas, all the world’s a tech sale: This is the moment to save. (Photo: Yahoo […] 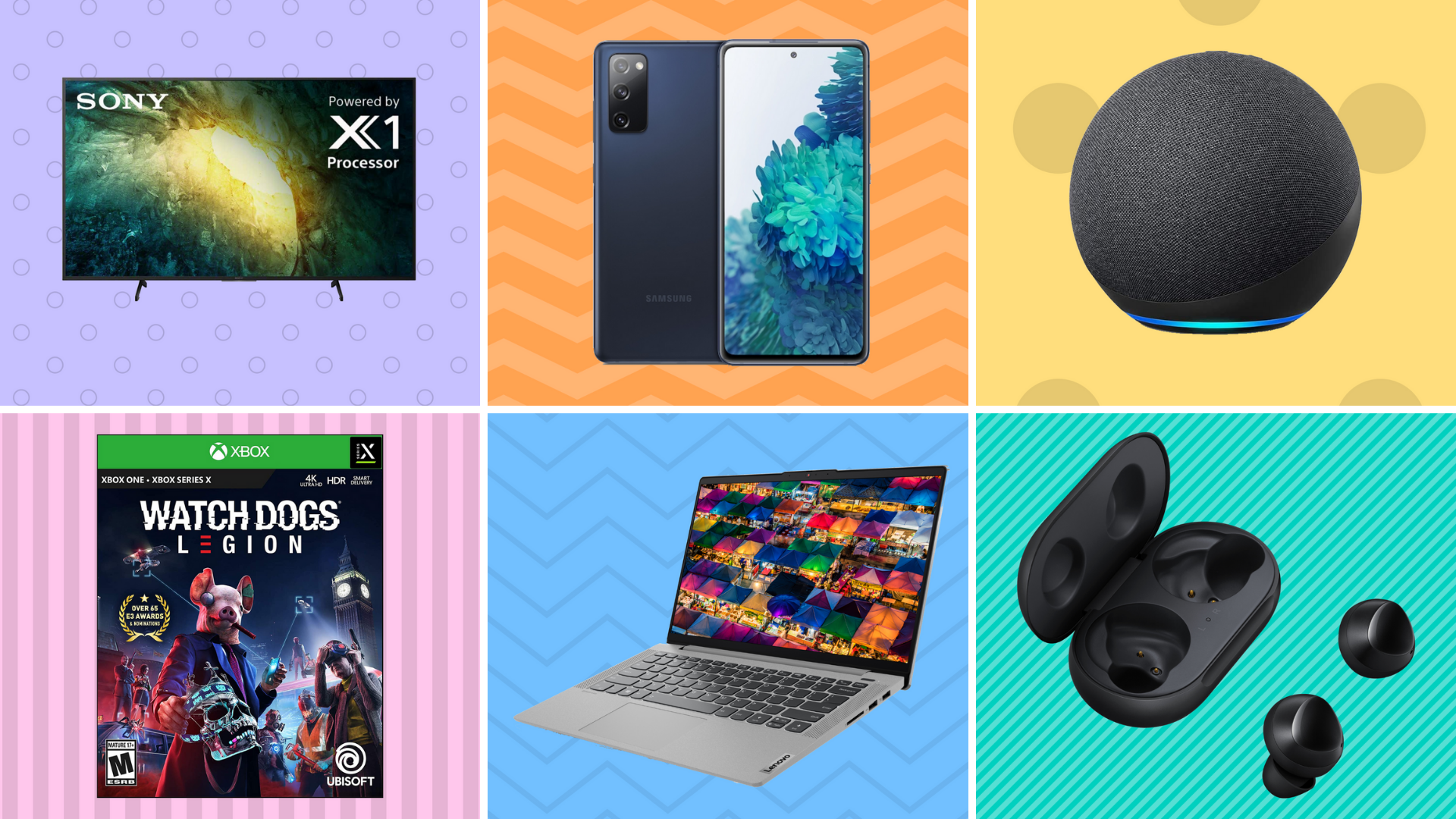