The coronavirus pandemic has made many hotel companies more eager for bookings without online travel agency commissions and with data on who the customers are. Price-comparison websites are a significant source of such bookings, and new tools are making it easier for smaller hoteliers to ramp up their ad purchases on these metasearch brands.

Until now, independent hotels and regional hotel groups haven’t spent on metasearch. Yet some technological and cost barriers are falling away for smaller players. Plus, the sector’s revenue crisis has driven some desperate hoteliers to try new things.

“Many small hotels are operating at low capacity,” said Richard Clarke, a senior analyst at Bernstein Research who covers European leisure and hotels. “If I’m a hotel manager, I know I’m not going to be refurbishing the property. So I can use my extra time to see how to use metasearch to cut my biggest cost line after labor, which is distribution — which is about 30 percent hotel profitability.”

Yet while Accor, Marriott, and others have long bought metasearch ads, it’s easy to forget that most hotels worldwide haven’t used metasearch yet.

“Metasearch will become a bigger part of the media mix for smaller hotel companies this year,” said Tina Markowitz, vice president of digital media and analytics at digital agency Cendyn.

Low revenues are causing hotel marketers to prefer to only pay for confirmed bookings, rather than for than metasearch’s typical cost-per-click ads for speculative searches, which may or may not result in bookings.

“Google has made it easier for independent hotels to take part in its auctions on a pay-per-stay commission model like what an [online travel agency] charges, which is something other metas haven’t done yet,” Clarke said. “Google’s fee structure is like an online travel agency, but it’s cheaper.”

Under the new model, Google lets the hotel take payment from a traveler, and the hotel only pays Google after the stay. That approach offers better cash flow management than the processes of online travel agencies, who often hold the guest’s money until the traveler shows up at the property.

“Metasearch brands haven’t wanted to offer pay-per-stay because they are unable to trace if a consumer clicks through an ad to a hotel site but then comes back three days later and books another way,” Clarke said. “Whereas Google thinks it can work out if a customer has ultimately stayed at a hotel, presumably because it knows a lot more about its users’ behaviors.”

The crisis makes it urgent for hoteliers to put “heads in beds.” So advertising on price-comparison sites has an appeal. Consumers who search for specific dates, places, and hotel names tend to be ready to book travel.

“Metasearch is a place where people are showing very, very high intent,” Markowitz said. “When you have a limited budget, that’s a good group to target.”

In the short-term, choice and price will drive travelers, and that’s a sweet spot for metasearch, said Sanja Vukik, principal commercial manager for hotels at Skyscanner. The brand, owned by Trip.com Group, now gives prominent display to details on flexible booking and cancellation policies for hotels in its search results, Vukik said.

Complexity has been a hurdle for hoteliers, though.

The amount of data involved in metasearch ad campaigns can become complicated, given the array of possible customer searches that are possible. For example, it can be hard to predict how much a small independent hotel should bid for ads to appeal to, say, German travelers versus Italian travelers, or for travelers looking for one-night stays versus ones looking for seven-night stays.

Imagine an independent hotel that has fewer than 50 rooms in Venice. Right now, it may be getting one booking a month from a metasearch brand like Kayak. It’s difficult for anyone to use one data point a month to predict how to run smart ad campaigns.

But change is in the air. Some vendors are attempting to solve the problem.

Triptease has created a solution that sees all bookings at a hotel. It can use that data to inform the hotel’s automated bidding for metasearch ads.

Cendyn in late May partnered with DerbySoft, a metasearch connectivity company, to analyze a hotel’s bookings. The solution gives a hotel an overview of its digital marketing expenditures, rather than having bits of the picture in different places.

SiteMinder will in the next few months make it possible for hotels to pull inventory and rates from its booking engine for use in Trivago, Kayak, and Skyscanner, having first made it available for Google last year. Many hotels use SiteMinder’s tools to manage the rates and inventory they upload to various agencies and sites. Nearly half of its more than 35,000 hotel customers use its booking engine.

A third problem holding back smaller hotel companies from using metasearch has been that they haven’t had access to tools to take advantage of so-called “upper funnel” advertising. While big brands have many ways to build brand awareness online, smaller companies often lack tools to reach consumers who haven’t yet searched for the name of a property but are running searches for the destination.

In April, Google debuted “property promotion ads” that let small hotel companies and independents advertise in ways that aren’t limited to consumer searches done on their property name. These ads can reach a broader number of people.

Other companies are also innovating.

Most of the metasearch brands have also refined their bidding tools to make it easier for smaller hotel groups to bid for travelers within specific geographic markets.

“Many hotels right now want domestic travelers in driving distance, due to the pandemic, and we now have new tools to target ads for the types of travelers relevant to a particular property,” Markowitz of Cendyn said.

A So-Called ‘Tax’ on Metasearch

A few other factors, such as new technologies and product offerings and the impetus of the travel crisis, may prompt some smaller hotel companies to get on board.

Until now, the cost has deterred some smaller hotel companies from using metasearch.

One cost relates to the software, called booking engines, that many hotels use to collect and manage bookings via their websites. Two widely used ones in North America and Europe are Sabre SynXis and Amadeus TravelClick’s iHotelier. Many of these engines charge fees for pushing rates and availability to metasearch.

UPDATE June 19: This article’s wording implied that Sabre’s popular SynXis solution charges for providing rates and availability to metasearch. That’s not true. Sabre’s tool has direct connectivity with many metasearch sites, where this data is provided on behalf of our hotels with no fees. The same is true for TravelClick’s iHotelier.

UPDATE: To be clear, Sabre, for example, does charge third parties that provide services for hotels around meta, such as digital marketing or parity services. These third parties use SynXis systems to source the data they need to provide paid services to hotels. The charges are a cost of doing business, but that’s typical in software.

“That has put a ‘tax’ on delivering prices to Google and others in meta that deters a massive swathe of the hotel industry, roughly two-thirds, from embracing meta,” said Charlie Osmond, a co-founder and top boss at Triptease.

But some providers of booking engines might counter that the demands put on their system by third-parties justify some cost-sharing. Others would say Osmond has overstated the issue.

Regardless, new systems from Triptease, Cendyn, Derbysoft, and SiteMinder promise to reduce the cost and complexity for smaller hotel companies running metasearch campaigns, the companies claimed.

Many hotels could benefit even from more straightforward fixes. Metasearch brands hand over to a hotel a customer and their data to the hotel, which online travel agencies usually don’t do. But not all hotels are collecting that data.

“Metasearch gives smaller hotels an advantage because when a customer comes from Google Hotel Ads, Trivago, etc., they land on a hotel’s booking engine,” said Stuart Butler, chief operating officer at Fuel, a hotel marketing agency. “If they’ve embedded the engine on their website right, they can identify that person and have a shot at collecting personal information for re-targeting, or at least smarter marketing.”

But many smaller hotels haven’t embedding these booking engines in their sites properly, Butler said. An online shopper prefers to stay within the same window throughout a booking process, but poor integrations can lead to confusing experiences, such as pop-out windows that look different.

“For a lot of smaller hotels, meta sends a visitor to their site, and the customer clicks a link that goes out to a subdomain in a new window,” Butler said. “They’re also often not able to track all the way through, which is a missed opportunity.”

“Some hoteliers haven’t set up booking engines to keep the guest within the same look and feel of the hotel site and to let the hotel track data properly,” Butler said.

Investors in companies that rely on metasearch, such as Tripadvisor and Trivago, shouldn’t expect any bump in revenue anytime soon. This trend among smaller players is still on the margins.

One crosscurrent facing these companies in 2020 is that smaller, less-well-capitalized online travel agencies have been pulling out of many traditional metasearch sites. These agencies worry that buying clicks for leads might not result in bookings. So in the near term, brands like Kayak and Skyscanner may see revenue declines.

“Metasearch’s business model was to take traffic from Google, pay very little for it, and then charge someone else more for it,” said Clarke of Bernstein. “But Google has been trying to take those travel sales for itself.”

In the next few months, experts expect a mixed impact on hotel spending on digital advertising. Smaller players need time to rebound from the crisis. Some properties may opt instead for billboard advertising to capture domestic road trippers.

In the medium-term, the crisis may give metasearch brands a chance to repair some of their beaten-down reputations after years of share loss to online travel agencies’s efforts to get customers to start searches on their sites and apps, as Skift has reported. (See Is the Metasearch Model in Big Trouble?)

Independent hotels may experiment with the new tools for metasearch that they didn’t have before.

In the long-term, Google may see more gains in metasearch than other players. Paying Skift Research subscribers can read the report “A Deep Dive Into Google’s Impact on Travel 2020.”

“Google had already been the first to make it easier for independent hotels to list in its searches with the help of tech partners, while other meta players have been slow to do that,” Clarke said.

You can hear Richard Clarke of Bernstein speak about the travel industry at Skift Forum Europe on June 30.

Is it worth it to bundle flights and hotels? Here's what to know as you start traveling again

Wed Jul 8 , 2020
The coronavirus pandemic caused an unprecedented need for consumers to cancel travel plans. Many travelers have encountered frustration changing arrangements, canceling trips and obtaining refunds. Some consumers prefer to handle each part of their travel on a piecemeal basis.  But if you end up having to cancel or make changes, […] 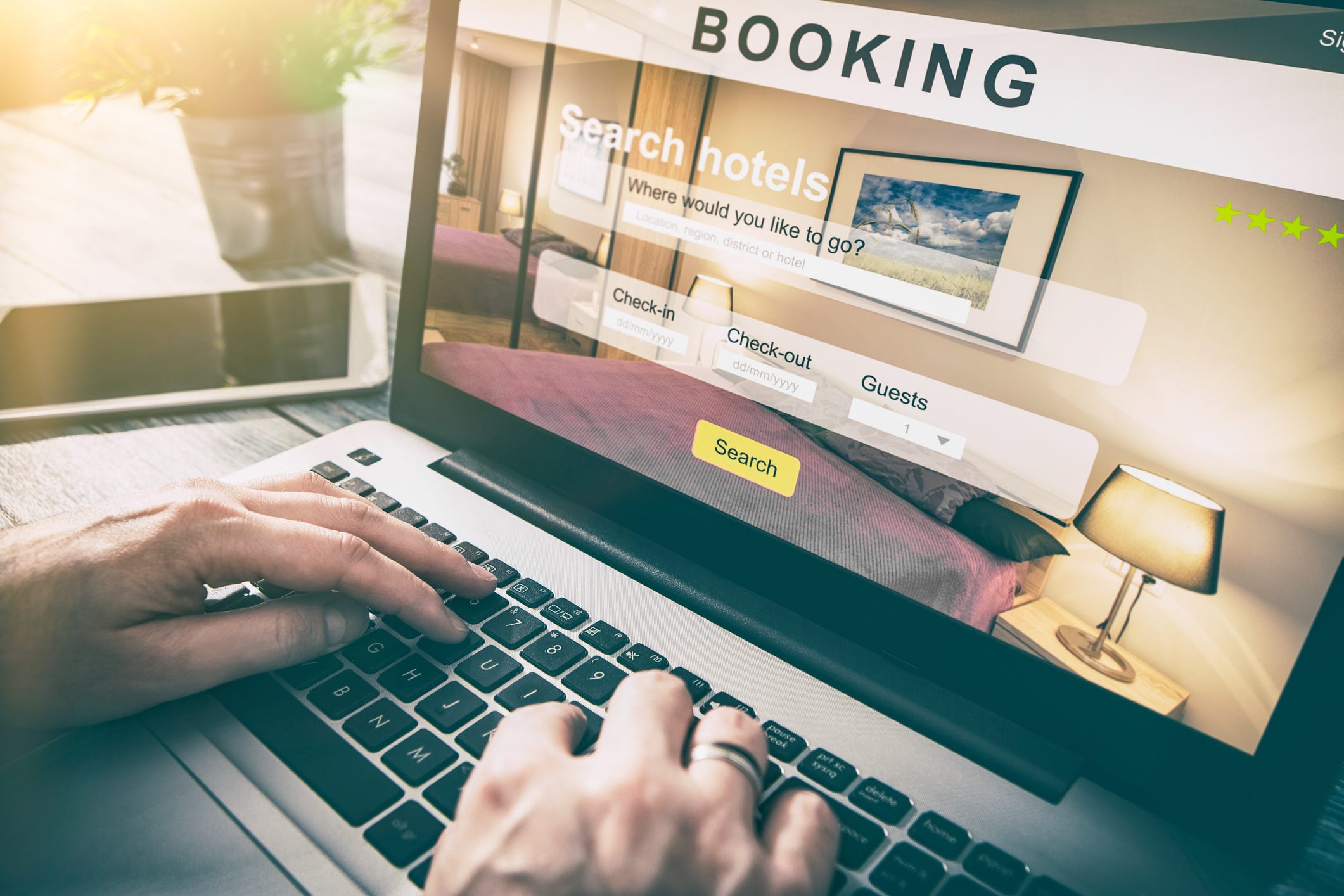